Kerala is known throughout the rest of India as the land of spices, coconut trees and spectacular backwaters. Of late, another component has raked up interest from the local population — the youth band known as V Minor. The group consists of seven members — Sidharth SKP (Harmonium), Zubin Imtiaz (Guitar/Percussion), Fidal (Piano/Vocals), Pranav Ramachandran (Violin), Adhithya SKP (Tabla), Alex Thomas (Guitar) and Allen Thomas (Bass). What began as a casual gathering of amateur enthusiasts has now developed into a popular band whose forte lies in remixing well-known titles with a desi twist.

It all began one afternoon when the youngsters randomly began playing a track using available instruments and things quickly picked up. “We were just chilling in my house after a heavy lunch when I started playing Radioactive on my harmonium. It was completely random. Then the others started to pick up the instruments they could find and started playing along,” says Sidharth. According to him, it was Alex who originally suggested recording the song and uploading it on social media. He goes on to state that all the members are equally involved in the band’s progress and that they intend to work on upcoming tracks sans deviation from their signature style. Adhithya, who plays the tabla, says that every member contributes an idea when the band meets up for their jamming sessions, which occurs roughly twice a year. “Even though we’re all from different age groups, we at V Minor respect each other’s suggestions,” he says. On track: The band has now started working on a song of their own

The band primarily works with English and Bollywood tracks. “We started out by working on the popular song Radioactive by Imagine Dragons. After that, we tried mixing English songs with Bollywood ones and to our surprise, they were all well received by our audience. We’re happy to see that our music has spread all over the world,” states Fidal. The band recently undertook a tour of Singapore, which went down as a great success. “The Singapore tour was absolutely amazing! We were thrilled to have such a wonderful audience who joined us when we played. Crowds like them give us extra confidence,” says Alex, who plays the guitar. However, it’s not always easy to organise such concerts. “Geographical barriers are tough on us. We are spread across the country and abroad, since we are pursuing our academics. So we try to produce our remixes whenever we meet up,” narrates Allen.

One of the band’s proudest moments stemmed from the sharing of one of their videos by the global artists Imagine Dragons on their official media page. Pranav, who plays the violin, says, “It was a great honour for us. That tweet from Imagine Dragons has given us a major confidence boost to undertake more projects.” When asked about other sources of motivation, Zubin says, “Firstly, our parents of course, and after that music itself and the happiness that spreads out of it.” 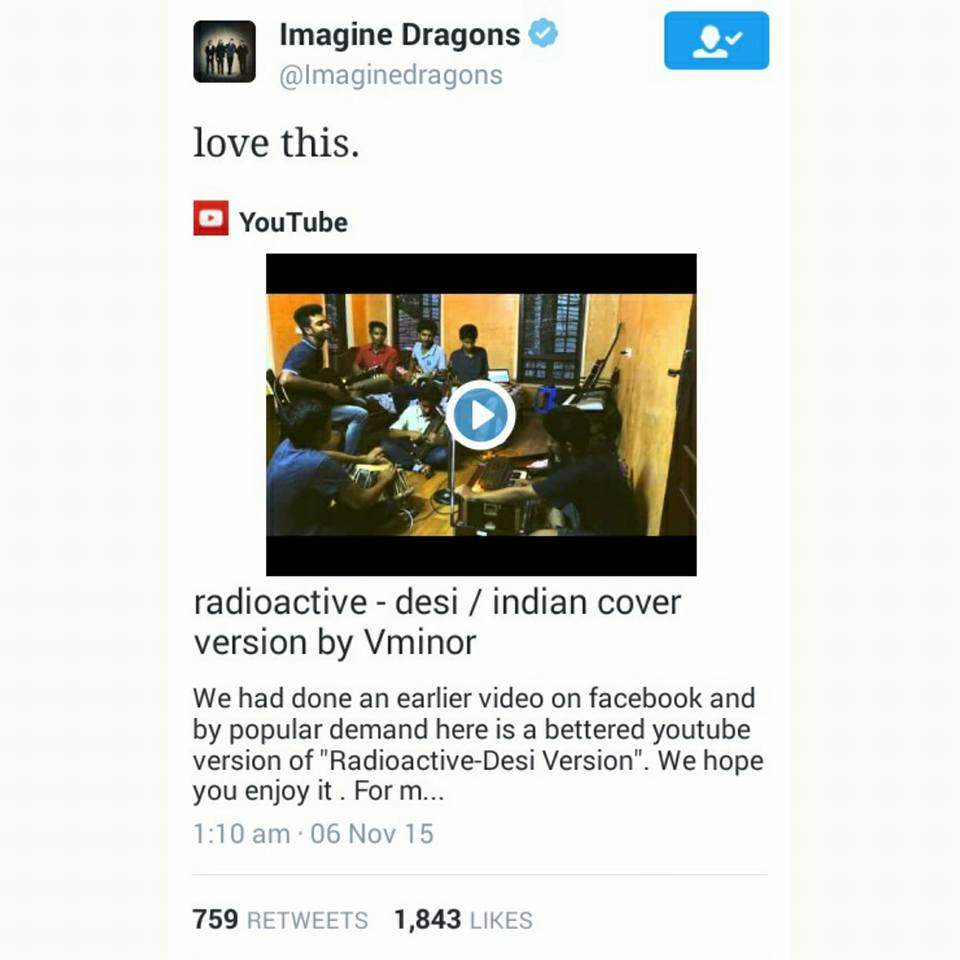 The band has remixed many popular titles, including Shakira’s Waka Waka, Coldplay’s Hymn for the Weekend, Major Lazer’s Lean On and The Chainsmokers’ Closer. Since they are an independent group who are not endorsed by any commercial firms, they rely on the funding provided by the organisers of the events where they have been invited to perform. With their closing remark, the band states, “We would like to keep innovating, experimenting and spreading joy through our music. Selecting music as a career option has never been on our bucket list but you never know when things might happen!”