It is common to see women speak up about menstrual hygiene and spread awareness in the Indian society, but quite uncommon to see men do the same. But here's someone who is changing things around and getting men more involved. Urmila Chanam, a Manipur-born, Bengaluru-based healthcare activist is out to teach men that they too have a role to play when it comes to spreading awareness about and changing policies regarding menstrual hygiene. 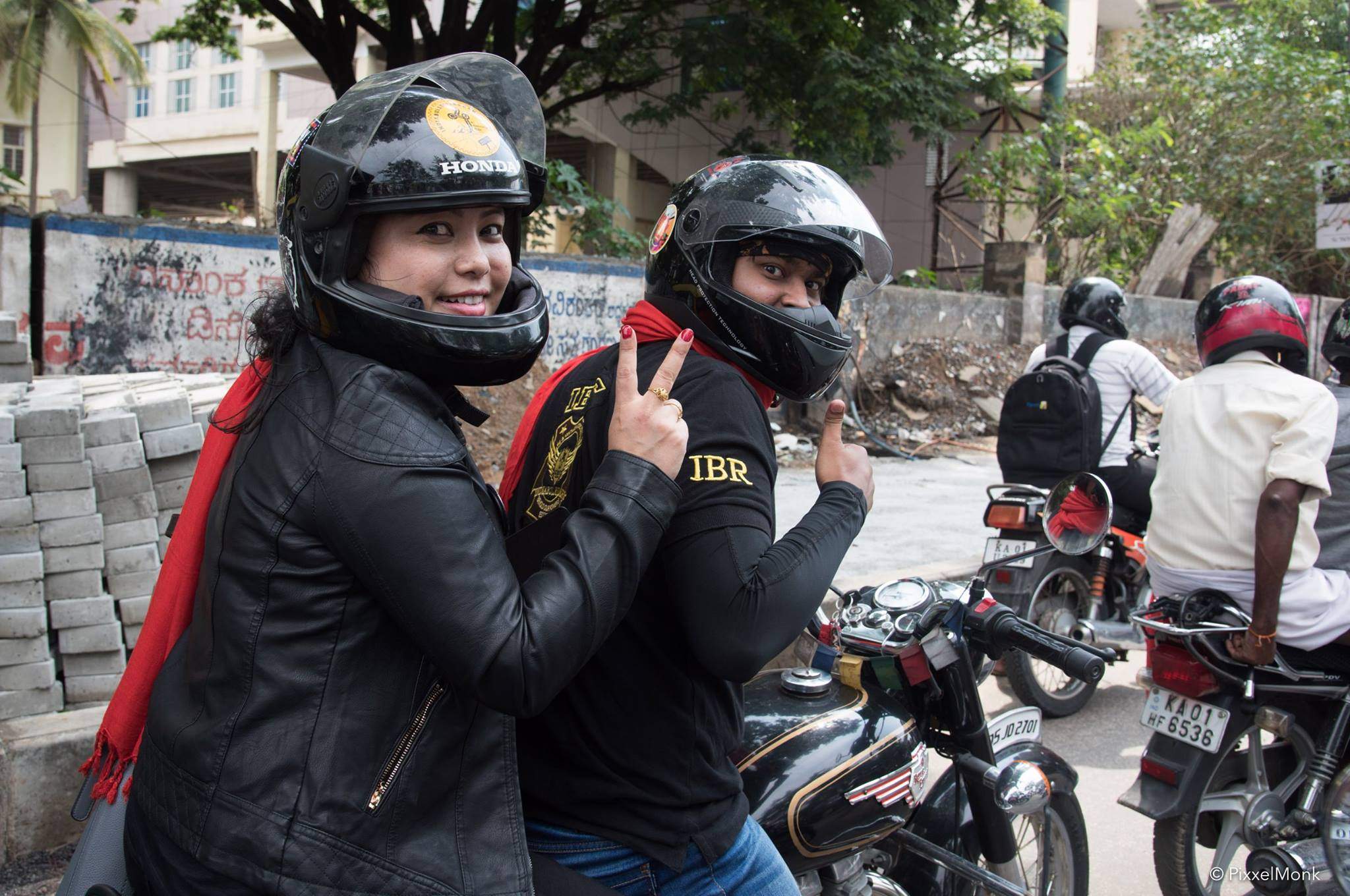 Menstrual hygiene: Urmila Chanam with a member of the India Bull Riders at Bengaluru 'Men Take Lead Ride' campaign in 2017

In 2017, as part of the Breaking the Silence campaign, around 100 men participated in a bike rally which was held in Bengaluru. Hoping to the continue the trend this year with a similar kind of bike rally at India Gate, Urmila said, "The upcoming bike rally is not only to spread awareness but to bring changes in the policy for rural India when it comes to menstrual hygiene. The Central Government should form a policy and make it mandatory for all FMCG companies, who sell napkins in urban areas for ₹34, to sell the same product for ₹20 in villages and remote areas."

To fight for this change, Urmila wants Prime Minister Narendra Modi and all the Members of Parliament to be a part of the bike rally which is likely to be held in November or December 2018.

Opining that men should not be sidelined when it comes to women empowerment, Urmila shared an incident that happened recently, "I have trained 9,400 people from 2014 to 2018, including women, men, and children. A male employee, who works in an MNC company in Bengaluru, conducted a session on the issue and trained 4,000 people in his company. I consider men like him as ambassadors. It was just two weeks ago when a group of men from the motorcycle club rode all the way from Bengaluru to Ladakh to distribute sanitary napkins. They purchased around 100 packs of sanitary napkins from Kaza and delivered them to female monks and other women in Pangmo, a small village in Ladakh."

When asked how well the men were able to communicate with the women in Pangmo, she said, "Men talking to women about menstrual hygiene is considered a taboo and if they do not do the groundwork properly, they might get beaten up by people. During my training, I also educated them about building a rapport with rural women. They spoke to a local about their initiative and she helped them reach out to the other women in the village. This way, they were not only able to distribute pads but spread awareness on the same issue." Ride for a cause: Renniesh Philip, Mahesh Kemkar, Sudhir Nanjappa, Koppira Darshan Ayanna were some of the people who went on the ride to Ladakh to distribute sanitary napkins

Explaining the important role men play in families, Urmila said, "It is mostly the men who are breadwinners in rural areas. When I went to different villages in Uttar Pradesh, Manipur and so on, I suggested that they have a budget especially for their wives, sisters or mothers. It can be used to build clean functional toilets, running water and napkins. Later, many come forward to practise the same and be a part of the change."

Urmila has worked with people in ten states through the Breaking the Silence campaign, while Rajasthan and Kashmir are next on the list. "I have tied up with NGOs in many states who have already worked for various causes. In some places, it is harder to enter and work, like in Jammu and Kashmir, as there are law and order issues. During such times, women's health and hygiene takes a back seat. But I am planning better for such situations as religion and sentiment also matter. Despite the 40 militant groups in Manipur, I was able to work peacefully with women there and create awareness." 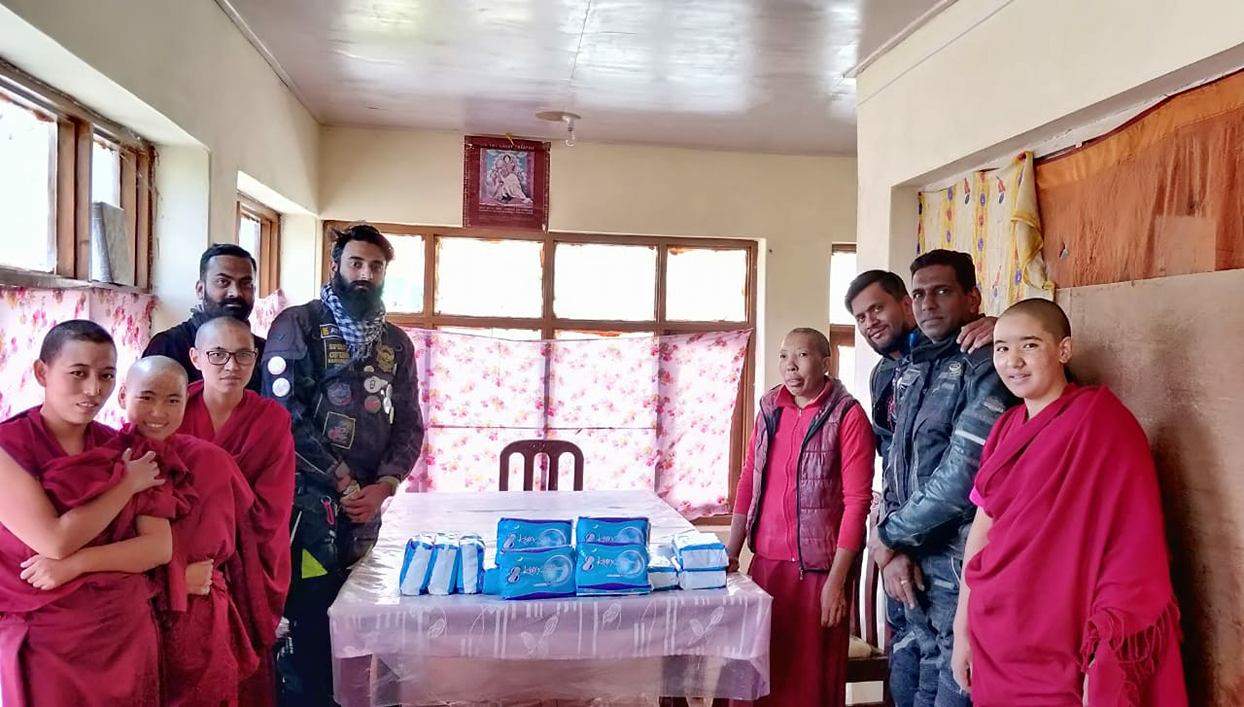 Spreading awareness: The four people who rode all the way to Pangmo ditributed sanitary napkins to the lady monks

Aside from creating awareness through campaigns, Urmila has also planned to set up a museum at her residence. "I have collected all kinds of pads, from the ones that were initially introduced to the ones that are used till date. I have also collected she-cups produced in different countries. I am hoping to open the museum soon," she said.