Can you imagine tales like Alice in Wonderland and The Little Prince retold as dastans? If you can't, then it might be time for you to watch Ankit Chadha perform

There was a time when people would gather around Sufis to listen to their dastans (Persian for ‘stories’) — ones of emperors, legends and the sands of time. But today, the ancient art of Urdu storytelling, Dastangoi, is long forgotten. And then we met Ankit Chadha, a young dastango. He is no Sufi, but he has reinvented the art and given it a complete revamp. Can you imagine tales like Alice in Wonderland and The Little Prince retold as dastans? If you can't, then it might be time for you to watch Ankit perform. And also, thanks to him, you can now listen to these dastans on your phone too. With so many questions about the art, we caught up with Ankit, and he didn’t fail to surprise us. Excerpts:

How were you introduced to Dastangoi?

After graduating from Hindu College, University of Delhi, I worked in marketing communications at a couple of start-ups. It was one of those days at work in 2010 that I stumbled upon an event page on Facebook. This was the first Dastangoi workshop ever conducted in Delhi by Mahmood Farooqui. That weekend, I was introduced to the art form. 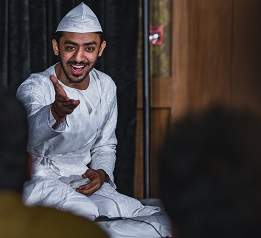 Global tale: He has spoken on Dastangoi globally, including at Harvard, Yale and the University of Toronto

Which was the first story you performed?

After acquainting and orienting myself to Dastangoi, I teamed up with Yojit Singh, a lawyer and a co-participant at the same workshop to prepare an episode from Dastan-e-Amir Hamza, under the direction of Mahmood Farooqui. We debuted with our performance of Dastan-e-Bachpan, a tale about the childhood of Amir Hamza and Amar Ayyaar, their experiences in a madrasa, where they were sent for education at the tender age of five.

Did you face any kind of difficulties?

For the first one and a half years of practising the form, I continued my day job in the corporate world. One of the initial problems I faced was staying motivated. I think the duo format came handy there. Whenever I would lose steam, Yojit would push me and vice versa. The other challenge was the language. I had, till then, never performed in chaste Urdu. We were learning an art form, the traditional text of which was published in the 19th century. I also found it difficult to get my qaaf right. Ustaad's instruction finally helped me sail through it.

For the kids: Ankit recently performed at the Neev Children’s literature fest in Bengaluru

When did you start blending modern tales with old art?

It all began with writing a spoof on Dastangoi and then performing it in the style of a dastan narrative on the occasion of the launch of the Dastangoi book. Then, in 2012, I quit my job. Around the same time, Digital Empowerment Foundation, a client for whom I was blogging for as a freelancer, proposed that I could work on a dastan meant to be heard on a phone. The novelty of the idea got me hooked. With whatever understanding I had of the mobile ecosystem as a consumer, I spoke to a few acquaintances in the industry and presented a Dastangoi performance to an audience that varied from CxOs of telecom companies to workers at the grass-roots level using the technology. The overwhelming response that this received made it clear that I wanted to dedicate my time to this form. My more contemporary tales, such as the ones on corporate culture and nomadic pastoralism, were also a novel take on the form, using it as a medium to tell stories of today.