Dear Sreeram and Co, here's why your Young Achiever's Matrimonial ad made me want to hit my head

Because, what other job do the IIT/IIM hudugas and hudagis of Bengaluru have other than picking partners like cauliflowers at a marriage market meet on International Youth Day?

Mr and Mrs Sreeram are probably not your regular next door maama-maami couple in Bengaluru. They are the uncle-aunty class - potentially “highly rich” (we cannot confirm because while speaking to The News Minute all he communicates is his dismay at being criticized for that audacious event ad in The Hindu, but because of human error as such, we can have the audacity to assume) - who put in a lot of thought into who exactly they think should get married to whom.

Slight correction - I mean, they put in a lot of thought into who “beautiful girls” in specific should get married to.

This morning’s bisibele bath welcomed Mr and Mrs Sreeram’s efforts - the beautifully adorned and ideated concept of the “Grand National Young Achievers Matrimony Meet” on the front page of The Hindu none-the-less - International Youth Day Special, it seems. In one’s imagination, the aunties possibly rushed to their paper-reading husbands with their hot morning coffee to tell them the grand news! Their IIT-educated, IAS-aspiring son, could now finally have a good pondatti from a “ultra rich” family.

Unless you have boycotted yourself from social media, and the news in general (a very good step for your mental health, if you ask me), you have possibly seen this post lurking around the not-so-dark corners of your news feed. 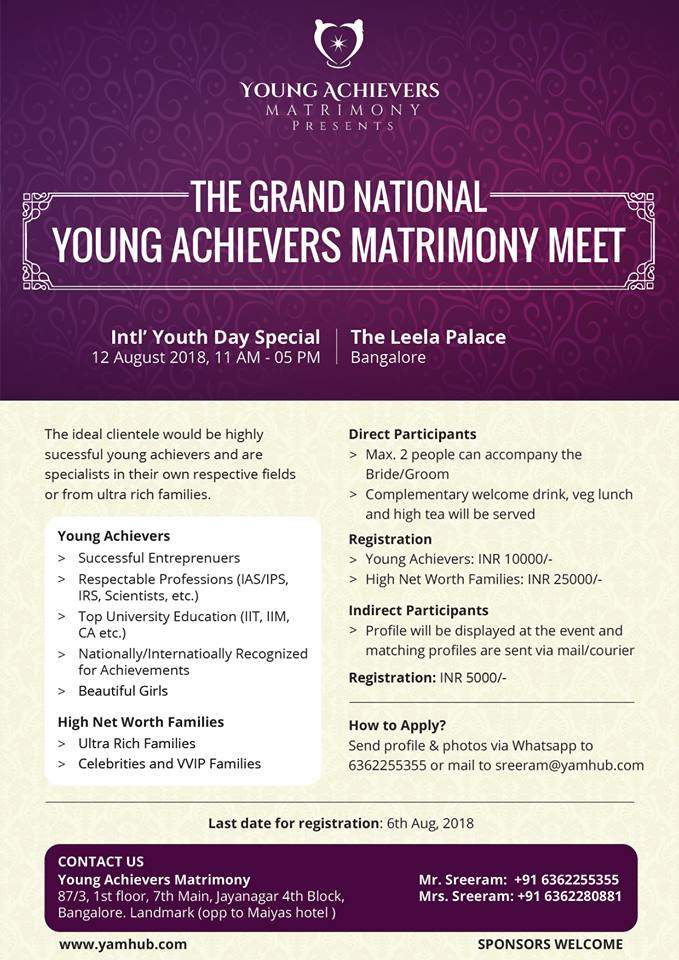 Just when you thought you didn’t really have much to say to a world moving towards certain doom, you come across these gems, as if just to remind you that you, fair, beautiful person, are unfortunately still a part of it. And as the generation gets more woke (or so we think), so do the wielding prowess of class based, sexist marriage markets, it appears.

But let’s break this down for those who are uninitiated, but probably know that there is something severely wrong about this post. During one of my brief classes in Sociology — by a horrible teacher, mind you — I read in the textbook that marriage was a socio-legal union for the purposes of procreation and protecting one’s economics (or something along those lines). As we grew older, we realised and accepted, that really, marriage was no benchmark for either.

It's 2018, and you would imagine that more and more people, at least within our own generation, would know that marriage, as a construct, is a patriarchal concept, one of ownership, of propagating the male lineage (while erasing the female one), highly driven by texts, possibly written and perceived by men. Okay, let’s assume you didn’t spend as much time thinking over all of this, whilst busy correcting the grammar of people and watching Chaai Peelo videos. But at the least, on a very base level, you’d imagine that marriages are a byproduct of affection.

We have been proven wrong, by the esteemed Mr and Mrs Sreeram though, despite their claims to TNM that their ad was purely market-driven. Marriages, really, are all about pomp and blitz, and the right mix of the “ultra rich”, “beautiful” and “respectable professions” so the progeny of nepotism can continue through the social veins of our country. And you must listen to them people, because varna log kya kahenge?

And no, please don’t be mistaken that they have ruled out caste here. I actually got in touch with Mr Sreeram, thanks to his number he has so leniently shared - Yaar, pyaar karvaya toh darna kya? Like the proud man I hoped he must be, he very clearly told me “This is not like one of those dating things you know - you have to come with parents.” My question - “So if I got shortlisted for this meet, do I actually get to talk to prospective people I may be interested in?” Clearly in the background of Mr Sreeram’s head a not-so-rare alarm bell probably rang. Certainly, beautiful girls from respectable backgrounds didn’t dare to ask such things.

I was curtly asked to send my profile, after which he would get in touch with “my parents” for “community and caste requirements, as they would possibly have (them).” Poor me. For all I know, I may have just been an IIM graduate making pot loads of money, but still wasn’t fit enough to actually have this conversation about MY marriage and MY interests and MY choices, without adult supervision in such matters. Chances are that even that Rs 25,000 for registration would have possibly gone from my pocket only, but choice is choice is choice, right?

But then again, the day besharam feminists like me spend Rs 25,000 on a man, would be the day when women actually found themselves breaking the glass ceilings of a capitalist work system — which is a situation as hallucinatory as me actually having Rs 25,000 to spend on anything.

Hey, but you know what, the fact that this post made me laugh, more than rile in anger, is what restores my faith in the success of nihilism. I even had the heart to investigate this a little more. The 'Young Achievers Matrimony' or YAM as its popularly known, is run by our beloved uncle-aunty, but this particular post directs us to Kalasivundham Matrimony - which is a, ummm, not a facebook page but a profile which seems to have things from ‘Swayamvara’ (season 5, mind you) to a ‘Doctor’s Matrimony Meet’. It’s like the Sreerams and their kin hate jazzing up the world. Keeping it simple and direct for generations to come, seems like their jam. (check ‘em out here : https://www.facebook.com/kalasivundham?hc_ref=ARS8S9lrliHDEHR1KEsah8tZyEi4HvW4aS7hDZCBbSJ2cv30pwHu0FpDDyqsgsyt24E&fref=nf)

And add them! How else will aunty find you the perfect huduga (keeping it real in Kannada for ‘boy’).

OR you can gatecrash this elite party with veg-only meals (or turn up during high tea, whatever fits) at Jayanagar, Bengaluru on August 12 - get the Youth Day in order, you know? But don’t forget your bank statements, your degrees, and of course, your parents. Mr and Mrs Sreeram are eager to meet them.


(The views expressed here are the author's own. She exerts the moral and inexplicable right to be identified as the author of this piece)