Gnani Sankaran was a multi-faceted personality and he traversed a vast public space that stretched from Tamil literature to electoral politics so easily and effortlessly. Most people know him only as a social and political commentator with incisive analysis, witty observations and accurate predictions. He had written in many leading Tamil and English publications and his ‘O’ Pages in the popular weekly magazine, Kumudam, was such a massive hit. Deep loss: SP Udayakumar said even in the toughest times, Gnani Sankaran had always stood up for the anti-nuclear struggle

Gnani published a Tamil magazine, “Theemtharikida” in the early 1980’s and it was known for his uncompromising stand  on issues and his steadfast and forthright views. Gnani also coordinated an informal literary gathering called “Manarkeni” and contributed immensely to literary criticism and debate.

The most important and personal connection between Gnani and me was his genuine and committed support to the anti-nuclear struggle that took place at Idinthakarai. When the anti-Koodankulam nuclear plant protestors were all holed up in this remote coastal village and were targeted by powerful political parties, prominent personalities and international lobbies and so forth, Gnani was there for us. Joining hands with the Chennai Solidarity Group, Gnani spoke about us and more importantly, for us and presented our views through the various debates and talk shows that he attended. Gnani being a credible and intelligent commentator, his support helped our campaign quite considerably. His choosing to stand with the ordinary people of this country demonstrated his personality and politics.

His short political stint with the Aam Admi Party must be mentioned. He joined the party and contested the 2014 by-election of Alanthur assembly constituency and soon after that left tha party claiming that the health condition of the party was not good. Some of us in the AAP were reluctant to wear the northern Indian Gandhi cap to demonstrate our party identity and found a creative native way out of that quandary by wearing a southern-style towel around his neck with the party’s name on it. Gnani preferred the Tamil name “Eliya Makkal Katchi” to the AAP and threw his weight behind us rather than the Delhi team.

Gnani wrote the screenplay for a documentary on Periyar but he was not a big sympathizer of Tamil nationalist politics. Gnani and I have had a few frictions in our political standpoints and have chided each other at times. But none of that has ever stood in the way of our loving and caring friendship. 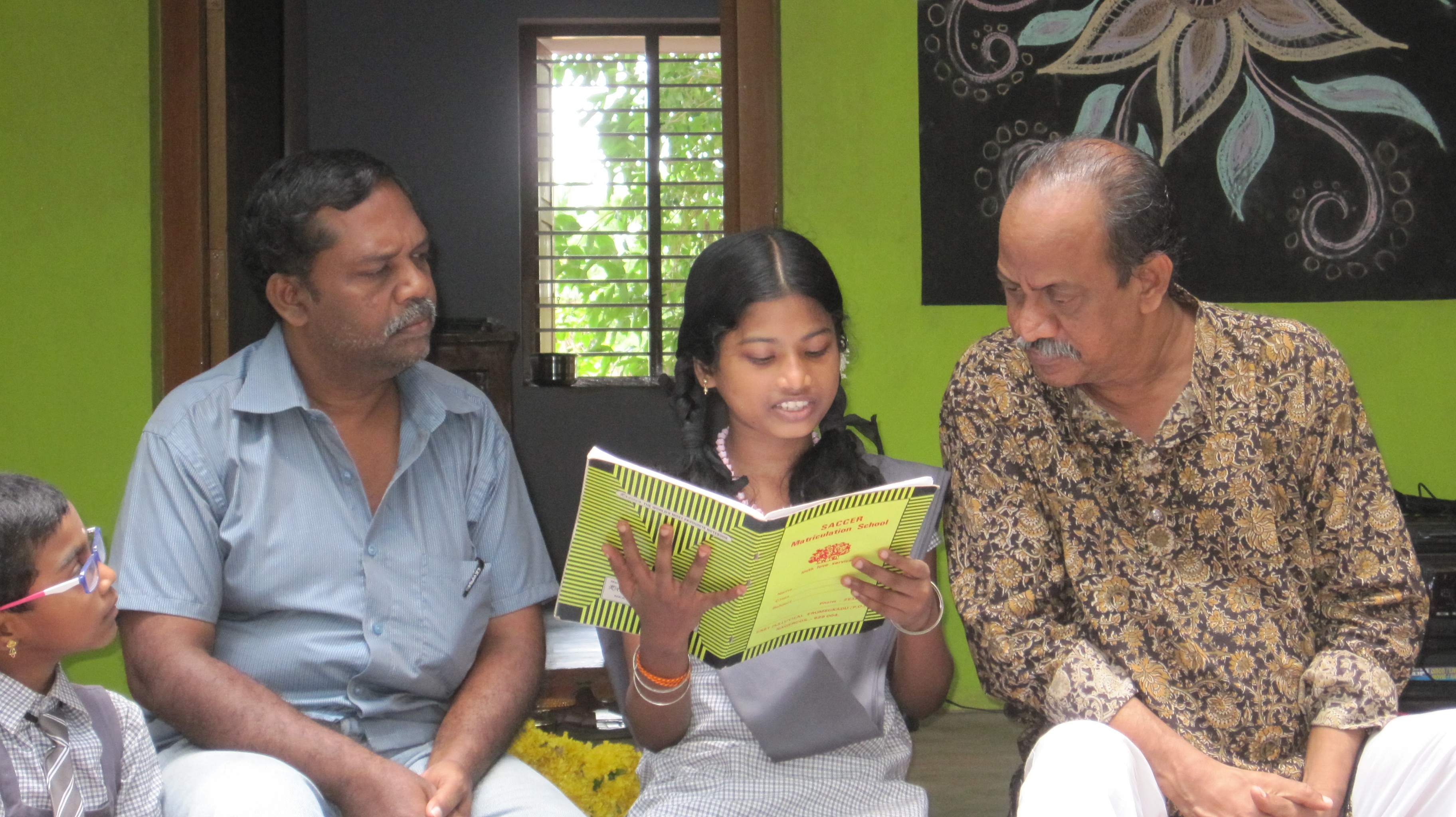 Engaging story-teller: Gnani Sankaran with a student at the SACCER school in Nagercoil recently

Last year, Gnani visited our SACCER School here at Nagercoil. That’s when we found out that Gnani was not just a thinker and writer but also a fine singer, captivating story teller and engaging teacher. Anyone can speak to any group of people but only a gifted, creative and caring human being can talk to a group of young children. Gnani was holding on to the attention of all our young children for quite a long time and showed that he was indeed an able communicator.

The tall man with a big heart and a sharp mind has been contributing enormously to the Tamil civil society for more than thirty years with such suavity and solemnity. I, for one, have lost a dear friend and a fecund fellow activist. I am sure this is how all his friends would feel about this man of letters and son of activism.

His last writing, a FB status posted hardly a few hours before his untimely death, was about Fascist personalities getting exposed and people identifying and understanding their destructive politics. He fought for freedom, liberty, independence and free thinking and decent and dignified life for all. Gnani Sankaran is survived by his partner Padma, son Manush Nandan and his wife. And lots and lots of friends, admirers and arduous critics, of course. Gnani, what a man!