Is there any truth to the posters about paying for professor posts in JNU?

The poster, named Nation First, depicts the so-called nexus quite sarcastically and comically. It tries to explain how it all works but fails to provide any evidence to support its claim. Is it true?

Even as the Jawaharlal Nehru University roars with students' unrest, allegations of discrepancies in appointments across departments and centres of the university continue. A two-page poster, allegedly exposing the nexus of administrators, teachers and politicians who accept 'donations' in exchange for jobs at the JNU, has been circulated on campus and have been doing the rounds on Whatsapp for quite some time. The poster, named Nation First, depicts the so-called nexus quite sarcastically and comically. It names Dr Atul Kumar Johri, who was accused of sexually harassing at least eight women on campus, as the kingpin of the nexus. It also names Dr Nagendra Sriniwas, who formed the JNU Teachers' Federation recently after moving away from the existing Teachers' Association. It named ABVP's Anand Srivastav as well along with Dr Tapan Vihari. Professors across departments have been accusing the administration of tampering with the recruitment system for months — that names are being inserted into the shortlist without the committee's knowledge. The presence of board members and external experts who have no connection with the subject has also cropped up.

In what appears to be a weak attempt at establishing the connection between the various players through a flow chart, the poster says that the 'Atul Johri Board' forwards the names of the candidates who fit the bill to Sriniwas, the current National Joint Secretary of ABVP who has been wrongly called the 'ABVP head' and also dubbed the 'Real JNU VC'. The poster claims that the names are then forwarded to VC Mamidala Jagadesh Kumar who then obliges. None of the above facts could be fact-checked. This is merely what the poster claims. 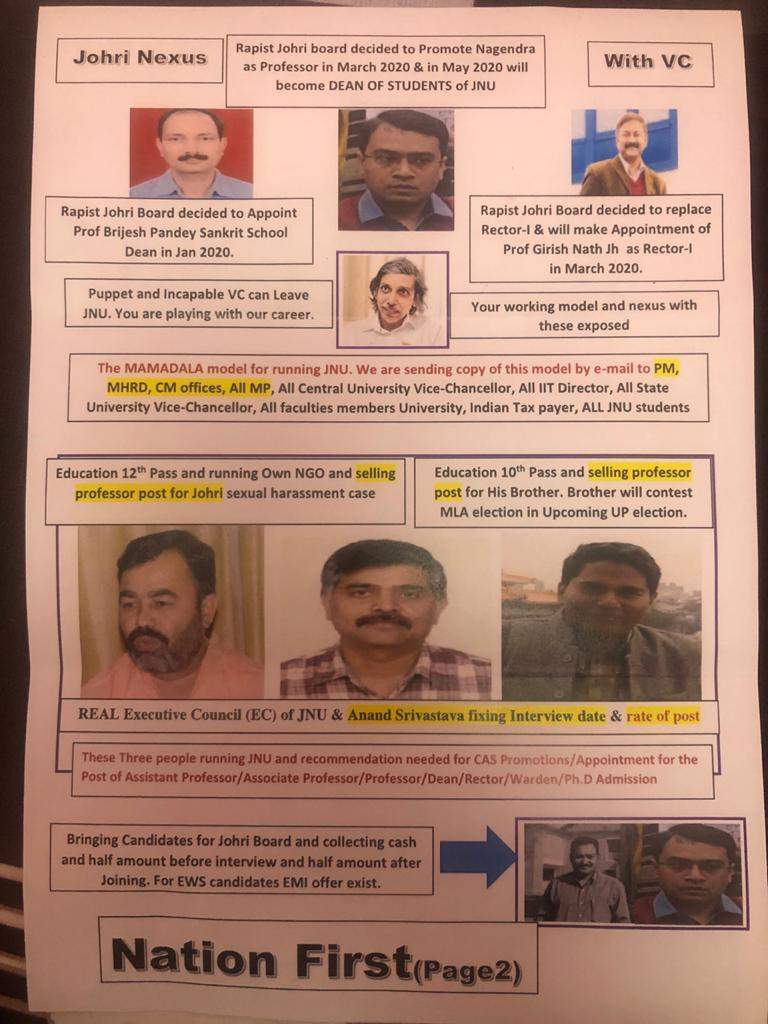 The second page also says that the same explanation will be forwarded to the PM, HRD Ministry, CM offices, all Central University VCs, IIT Directors and essentially everyone in the country but no one has reported receiving any such mail yet. The Rectors, Dean of Students, Additional Dean of Students, Proctor and the Registrar have also been named and have been called puppets of the 'Johri Board'.

Then why talk about something that has not been proven or can be termed baseless? Because of two names that appeared in the poster. Shruti Agnihotri and Mukesh Kumar. Two people named in the poster — Mukesh Kumar and Shruti Agnihotri — have been appointed as assistant professors on December 27 last year. Neither Mukesh nor Shruti responded to our calls or texts for comment on their appointments and the allegation that there were questions raised over them.

According to the Proforma for Screening/Shortlisting of Applications for the Post of Assistant Professor Based on UGC Regulations, 2018 that shows the initial shortlist of seven out of 30 people, Shruti was rejected as she did not have a PhD — which is not a requirement for the post in any case. Mukesh Kumar though has no such discrepancy. He was shortlisted by the committee, to begin with.

The question that academics are asking is this: How can the makers of a malicious poster know two months in advance that two junior professors will be selected for a job? In truth, how can anyone, really?

Whether what the poster tries to describe, quite inefficiently, is true has not been proven to any degree yet but Edex spoke to a scholar of Korean Studies who had applied to the Centre twice and claims that he had been asked to pay Rs 10 lakh in 2016 for the post of an assistant professor at the varsity. "I was a student of JNU and during my time here as a student, I had supported the ABVP, though I have not been an active member ever. I was known to be a right-wing sympathiser and thus knew a lot of the people associated with them," said the scholar in the condition of anonymity. "When I came to the campus for my interview I was told that I needed recommendations from certain people and was asked to meet a professor. I was introduced to him and later his associate asked me to pay Rs 10 lakh and said that would make sure that I will get the job. I had the highest API among those who applied. I told him I won't pay," he added. He did not get the job. No surprises there.

The scholar, who calls himself a true desh bhakt, said that this is nothing but destroying your own country. "These people do not love India. They are selling the Bharat Mata they claim to protect for a mere Rs 10 lakh. How is this justified for any form of nationalism? A teacher will influence generations to come. If they are not competent enough how will they provide the education which our youth needs?" he asked. "At a time when the higher leadership, including the PM, is talking about becoming a superpower, these people are making the local, on-ground bases weak. We can never prosper if our youth is not educated," he added.

He applied again three years later in 2019 and during his interview told the VC that he hopes this time his selection will be done impartially. "I hoped to appeal to his humanity but it did not help. Even though I was again one of the most qualified for the post," he said. We were unable to independently verify these claims as neither the professor nor the VC responded to our queries.

The JNU Teachers' Association Secretary said that the VC has compromised the integrity of the faculty selection process by establishing his control over it. "Once that happens, every selection tends to become suspicious. The only way of getting to the real truth is through an inquiry into all selections done by the VC and this is what we have requested from the MHRD," he added.