The International Indian School, Dammam had issued two separate circulars to students and their parents, asking them not to fret too much

Raise your hand if your parents told you that class X is the turning point of your life. Now raise your other hand if two years later, they told you that class XII is the real turning point of your life. Undoubtedly, class X and class XII were the most stressful years in the lives of everyone, with everyone from teachers, parents and even neighbours asking you to score well in every subject.

In the midst of all this, two circulars issued by an Indian school in Saudi Arabia stand apart and is rather refreshing. Issued on January 15 by the International Indian School, Dammam, the first circular tells the students to work smart and be stress-free during the exam season. Clearly, this is winning hearts on the internet. 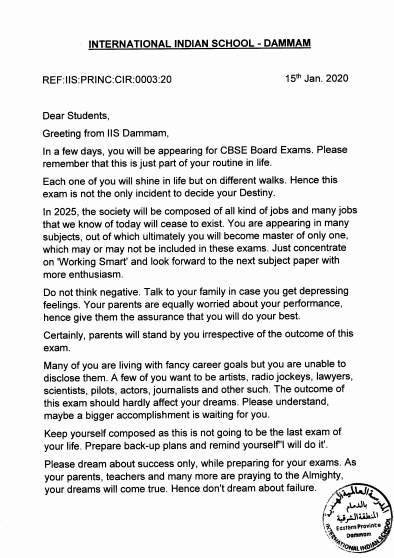 "Each one of you will shine in life, but on different walks. Hence, this exam is not the only incident to decide your destiny," it reads. (Are you secretly wishing that you teachers told you this?). "In 2025, society will be composed of all kind of jobs, and many jobs that we know today will cease to exist. You are appearing in many subjects, out of which you will ultimately master one, which may not be included in these exams," it reads.

Issued by the school's principal Zubair Ahmed Khan, the circular also asks students to stay positive and not think about failure. "Please dream only about success. As your parents, teachers and many more are praying to the Almighty, your dreams will come true. Hence, don't dream about failure," reads the circular.

On the same day, the school also issued another circular addressed to the parents, asking them to support their children and to not put too much pressure on them. "If your child gets top marks, that's great. But if they don't, please don't take away their self-confidence and dignity. Tell them it's OK, it's just an exam," says the circular. How I wish my parents and teachers thought this way! Sigh!