As India battles Coronavirus, the employees of Delhi University, after directions from the University Grants Commission (UGC) and the University, had donated their one day salary to help those in need. While the contributions were supposed to be made to the Prime Minister's National Relief fund (PMNRF), the Vice-Chancellor, Dr Yogesh K Tyagi declared that more than Rs 4 crore was donated to the PM's Citizen Assistance and Relief in Emergency Situations Fund (PMCARES). 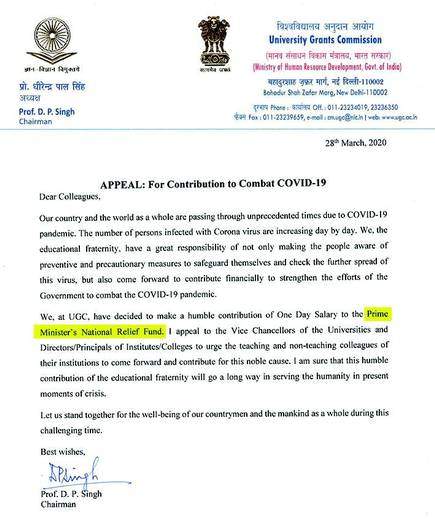 The DU Teachers' Association (DUTA) has written to the VC stating that such acts of "misdirection" shake their faith in the "professional working of the university". "Why were the employees not informed that their contributions would be sent to PMCARES? Why were contributions collected in the name of PMNRF? All employees have the right to know at the very least that their contributions will be made to that authority in whose name the contributions were solicited," the teachers asked. All official documents, from Dr DK Singh, Chairman, UGC, to the one from the acting Registrar of the varsity clearly mention that the funds raised will be donated to the PMNRF while Dr Tyagi, in his letter to the alumni has stated that more than Rs 4 crore was donated to the PMCARES fund.

This is not the first time the staff of the central university is donating for a cause and they have always donated to the PM or the CM's National Relief Fund, said DUTA President Dr Rajib Ray. "We have donated during the floods in Kerala, the Uttarakhand disaster and also for Bihar. Some of the donations were made in a decentralised manner and that has its own logistical problems but there was no problem with transparency. It has efficiently worked out most times because of trust and transparency between the employee, college and the university. It is extremely unfortunate to note that in the present case, this transparency has been violated. It is totally unacceptable that an appeal is made by the University for contributions under one head (PMNRF) and in reality the contribution is submitted to another head (PMCARES). Such acts of misdirection shake our faith in the professional working of the University," said Dr Ray. "Not just the teachers but the principals and head of departments, to whom the letter was addressed to, should also stand up to this. They should ask why this happened," he added.

Much before the March 29 directive from the Registrar's office, the DUTA had circulated a list of PM and CM National Relief Funds and urged the teachers to donate, said Dr Ray. The teachers have been working with and donating to various NGOs as well, said Dr Abha Dev Habib, who teaches Physics at Miranda House. "The letter also states that those who do not want to donate have to write back declaring their intent of non-payment. This again casts out the people. Generally, those who wish to pay are asked to write back," she said. "All this (diversion of funds to PMCARES) has created is a lack of trust," she added. The original appeal for contributions for the relief was from the UGC Chairman, Dr Singh on March 28 was sent out before the PMCARES Fund was established, “We, at UGC, have decided to make a humble contribution of one day salary to the Prime Minister’s National Relief Fund. I appeal to the Vice-Chancellors of the Universities and Directors/Principals of Institutes/Colleges to urge the teaching and non-teaching colleagues of their institutions to come forward and contribute for this noble cause."

But the UGC later sent emails to central universities asking that the donations be sent to the PMCARES Fund, reported The Telegraph.

A Press Information Bureau release had on March 28 announced the new fund’s creation, “Keeping in mind the need for having a dedicated national fund with primary objective of dealing with any kind of emergency or distress situation like COVID-19 pandemic, and to provide relief to the affected, a public charitable trust under the name of Prime Minister’s Citizen Assistance and Relief in Emergency Situation (PM-CARES) Fund has been set up.”

The PMCARES is an "entirely of voluntary contributions from individuals/organizations and does not get any budgetary support" according to its website. But the fund has run into allegations and controversies since its recent inception. The Congress objected to it saying that why do we need another fund when we have Rs 380 crores in the PMNRF that is yet to be utilised. The PMCARES fund is chaired by PM Narendra Modi and board members include the defence, finance, and home ministers. Corporations and individuals are allowed to contribute, and the government is encouraging small donations. What the PMCARES does not have is a member from the opposition.