UoH elections: Why SFI's Abhishek Nandan decided to stand for the President's post this year

Abhishek first came to UoH in 2014 to pursue a Masters in Hindi and then stayed on to pursue his PhD. It was here that he became associated with the SFI

The University of Hyderabad is the next campus to face its student elections this month and the campaigning is already in full swing. With only two days to go for the big day, it was not easy to get hold of Abhishek Nandan who is contesting for the President's post from the SFI-ASA-TSF-DSU alliance.

Abhishek first came to UoH in 2014 to pursue a Masters in Hindi and then stayed on to pursue his PhD. That is five years of being on campus and it was here that he joined the Students Federation of India though he has always been a left-wing ideologue. "I come from a small village called Parawan in the Jehanabad district of Bihar. I lost my father when I was very young and my mother worked and still works at a private nursing home there. It was during the 12th standard that I witnessed s street play," Abhishek said.

This street play pretty much changed the course of his life. Dramatically Right: A street play changed his perceptive on life and it continues to be a great part of his life

"The street play spoke about left-wing politics and I was very intrigued by it, so I began to learn more and more about it. But there was barely any presence of the SFI in Patna and so I was part of the student wing of the CPIM  for a while," Abhishek said. Then after his undergraduate course from Patna University, the 26-year-old made his way to the South and finally at UoH he met people who shared the same ideology as him.

So for the last four years, the scholar has been an active member of the SFI. So what have his five years been like at UoH? "With my fellow students, of course, I've has a great experience. However, I used to think that only things back in my village were backward and in a despicable state. The school I studied in didn't have English as a compulsory subject even in the 10th, I would get marks like 20 on 100 there but I've realised that things are messed up in the cities too," Abhishek said.

The scholar says that his imagination of what cities are like has been completely crushed, "I have realised that the government, the institutes and the administration are almost as bad as things were at my village," he laughs. So when his name was proposed as a candidate for the President's post, Abhishek felt it was upto him to do something about the state of affairs on campus. "Initially I was a little apprehensive, but then I spoke to other members of my party who really encouraged me and said this was the time for me to stand up for what I believed in. People were raising all the right questions, questions about the academic council, MHRD, UGC and higher education in general," he says.

Like a lot of young people, he has had a growing discontent with the system at large. "Indian corporate companies are looking to privatise higher education and this was a time where we all needed to stand up to stop this from happening," Abhishek felt. And so, he took the plunge. 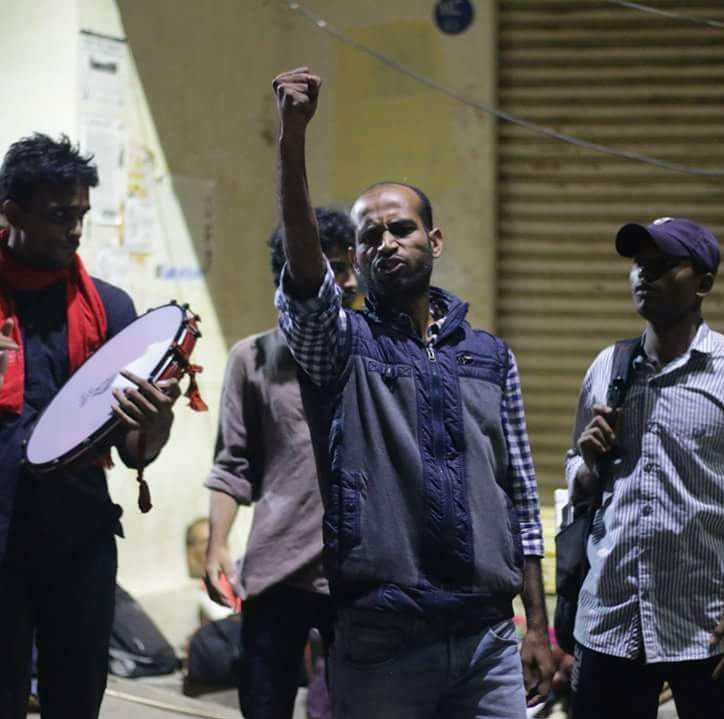 Getting political: Abhishek has been an active member of the SFI during his five-year stint at UoH

So if he does win the elections, we asked Abhishek what would the first things on his agenda be? "My immediate concern is the self-financing courses and the fee hike. Almost 70 percent of the students who study here cannot afford education which is why they come to public-funded universities. Now we see that with these new policies, the government is appeasing private companies by helping to increase uneducated labour," he said.

The student leader also said that the campus is increasingly becoming a space that is not open to dialogue and debate because of right-wing dominance. "They want to destroy the culture of debate on campus, a space that is supposed to be intellectual. Which is why as progressive forces, we have to try to fight for the freedom of debate on campus," Abhishek said. Lastly, the candidate said he would want to focus on developing infrastructure on campus, "As I mentioned before, students who come to public-funded universities are usually who are from economically weak and marginalised sections. We deserve infrastructure that is as good as in a private university, so that is also a major priority for me," Abhishek explained, before running off to his next campaign. Here's wishing him all the best!