MHRD committee to go to campus to meet JNUSU, students to put up human chain

All the office bearers and councillors of the JNUSU received an email from PK Singh, the Under Secretary of MHRD notifying us about the meeting

The 'high power' committee appointed by the Ministry of Human Resource Development (MHRD) is set to meet the Jawaharlal Nehru University's student representatives for the second time this week and this time they are coming to campus. The committee is set to meet the students at the administrative block at 4 pm on November 22. The protestors have been 'blockading' the ad block for the past two weeks and the authorities have not said whether there will be restrictions on the number of students present there while the committee visits. "All the office bearers and councillors of the JNUSU received an email from PK Singh, the Under Secretary of MHRD notifying us about the meeting," said JNUSU Vice-President Saket Moon. The JNUSU has called for the formation of a human chain from the North Gate to Freedom Square on campus at 2 pm which will then be followed by a mass deposition to the MHRD-appointed committee. The students had last met the committee at Shastri Bhavan on November 20. The teachers' representative met with the committee as well on November 21 and told the committee that they thought the VC is at the root of every problem.

The JNUTA President, Dr DK Lobiyal, said that the teachers discussed the issues at the university with the committee in detail. "We spoke about the issues that are there at present and also discussed how it can be resolved. We have made our point very clearly to the committee — we feel that all the issues can be traced back to one root cause, the VC. He doesn't listen to anybody and if he is there then we can never attain normalcy at JNU no matter what else the committee suggests," said Dr Lobiyal. "The committee promised to come to a decision as soon as possible," he added. 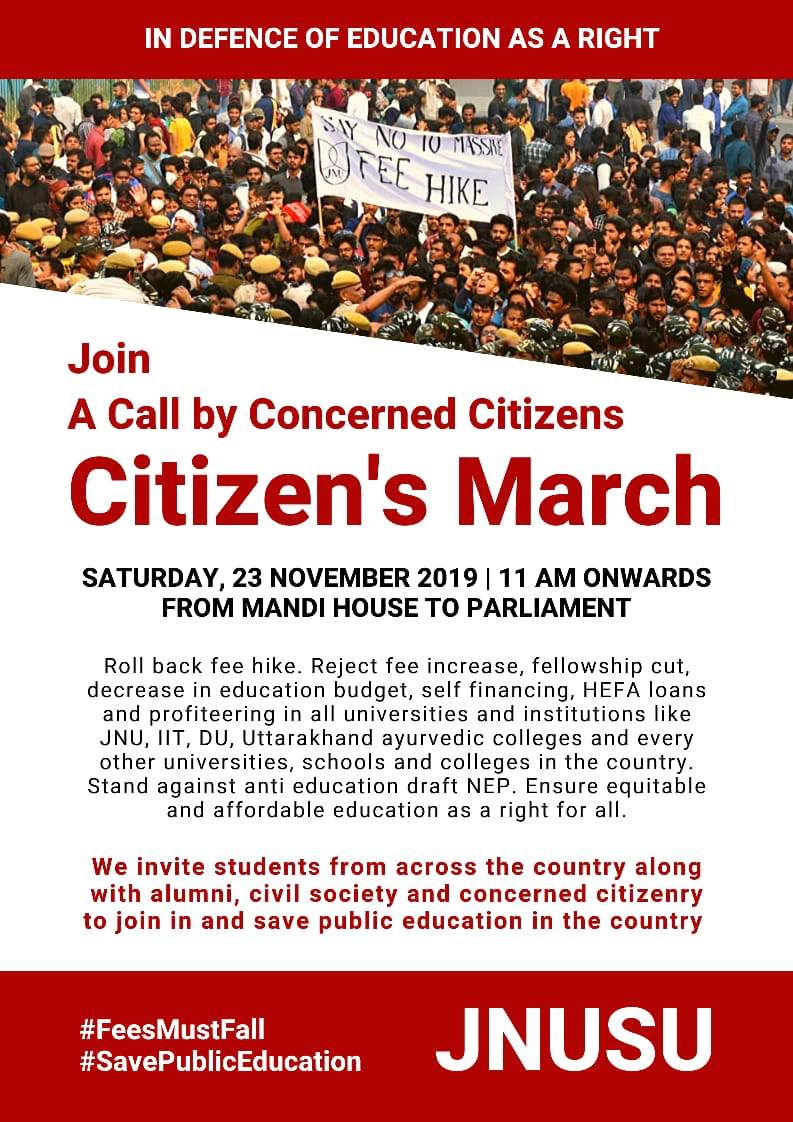 Meanwhile, the JNUSU called for the Citizens' March from Mandi House which is set to start at 11 am on Saturday. Their demands remain the same. They want the fees to be rolled back to what it was. They are also protesting against the fellowship cut, decrease in education budget etc in institutes like JNU IIT and DU among other universities and even schools in India. They are also protesting against the New Education Policy and wants affordable and equitable education for all. This, the students said was a call to save public education.