The video posted on Facebook garnered over 601K views, more than 14,000 shares and netizens praised the young women for standing up against the toxic mentality exuded by the woman

If you woke up to find social media flooded with the hashtag #apologizeaunty or #SaySorryAuntyJi, this is what it's all about. In the latest airing of blatant patriarchy and a cavalier attitude towards sexual abuse a video, which has now gone viral, shared by a girl in Delhi shows a group of four to five young women at a mall in the city confronting an older woman who purportedly shamed one of the girls for wearing a short dress and allegedly told them they would be raped for it. "Hello guys, this lady wants to wear short dresses to encourage all to see them. All the ladies wear (these) short dresses, or are naked... to (get) rape(d)," the older woman is heard saying while facing the camera, offended by the length of the girl’s dress.

The incident was recorded and then shared on Facebook and Instagram by Shivani Gupta, who was the girl being shamed. This was her post, "Hey, guys. Today my friends and I were harassed by a woman at a restaurant for me wearing a short dress. This middle-aged woman you’ll see in the video addressed seven men at the restaurant to rape us because she felt we deserved it for wearing short clothes. Our instinct was to turn away from the drama but supported by our colleagues, we took her on at a shopping centre nearby. We gave her the chance to apologise, to no avail, of course. Nothing moved the needle for her, not even another woman who learned the story on the spot and implored the ghastly woman to apologise. See for yourself. And share," Shivani wrote on her Facebook post along with the video on Tuesday night.

The incident was said to have taken place at Nukkadwala Restaurant, on Sohna Road in Gurgaon where Shivani and her friends had gone to get some snacks. That's where the elderly woman, identified as Soma Chakrabarty, allegedly came up to the girls and expressed her concern about one of them wearing a short dress. According to Shivani's post, she addressed some men present at the restaurant and casually told them to rape the girls because she felt the girls deserved it for having the nerve to wear short dresses.

Shivani had also posted the video of the altercation on Instagram which was taken down soon after. 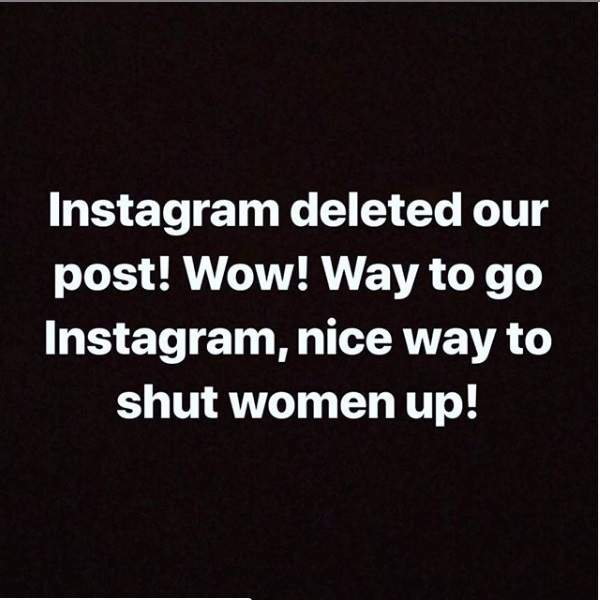 After the elderly woman's comments, these girls followed her to a shopping centre where they decided to confront her and asked her to apologise for her actions, as can be seen in the recorded video. The woman is seen asking the staff at the shopping centre to call the police, to which Shivani is heard responding that she has proof from the CCTV footage at the restaurant and that she could use it to complain against her. The elderly woman doesn't seem to bother. "Why do women in burkas get raped, then? Why do two-year-olds get raped then? How do you explain that?" we can hear another girl asking.

At some point, another older woman (a mother of two) is also seen stepping in to defend the girls from the barrage of misogyny. "You have no right to tell her what to wear," she is heard asserting furiously. 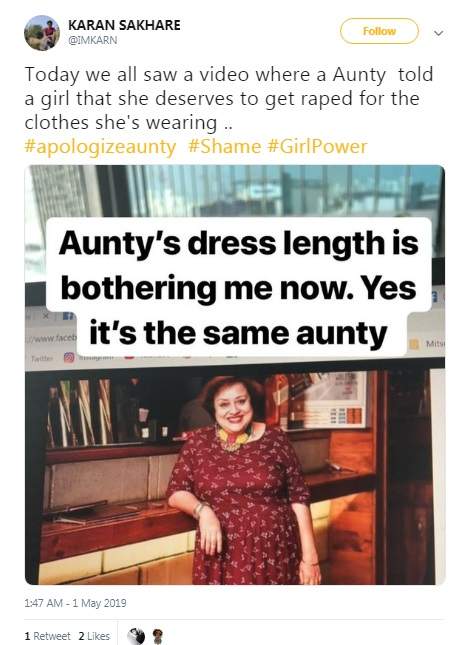 Numerous reactions poured in after the video was posted on social media. There are thousands of comments on Shivani’s Facebook post, supporting her and her friends for having the courage to stand up to regressive forces. 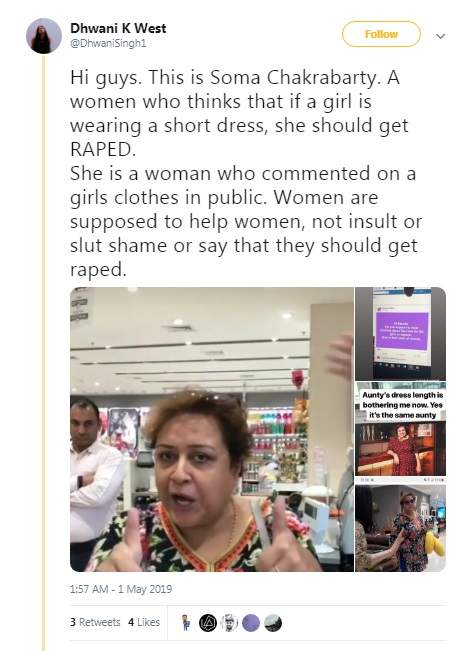