After the social media outrage on the post, the professor Kanak Sarkar deleted it. He wrote a post defending his claims later

Kanak Sarkar, A Jadavpur University Professor of International Relations recently got into trouble for posting a Facebook status where he stooped down to likening a virgin woman to a 'sealed bottle'. He goes on to ask men if they will be ready to buy a packet of biscuits with a broken seal. Using the headline: Value Oriented Social Counselling for Educated Youth, he posted, "Many boys remain fool. They are not aware of a virgin girl as a wife. Virgin girl is like Sealed Bottle or sealed packet. Are you willing to buy a broken seal while purchasing a Bottle of Cold drinks or a packet of biscuit,"

After the understandable outrage by Twitterati and Facebook users, the professor has now deleted the status. 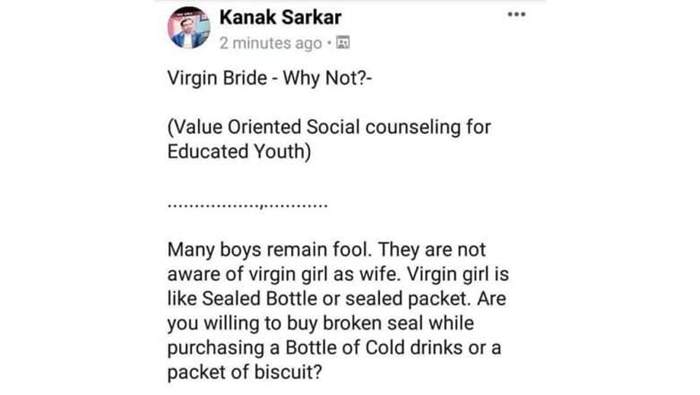 There was outrage even inside the university. A faculty from the same department who does not wish to be named tells us that action will be taken against Sarkar after a review by the grievance redressal cell. "I will take this up and will do everything possible to ensure that justice is served. The Teachers' Association at JU agrees to the fact that strict action needs to be taken," he says.

If you think this is Sarkar's first tryst with misogynistic Facebook posts, you're wrong. His colleague tells us why. "This is not the first time that Kanak has written something like this. In November 2018, the professor had written about the 'importance of virginity.' In one of his Facebook posts from November 9, he had said that millennials these days think that celibacy and virginity are not exactly a part of ethics and morality. And that is the reason that girls end up being "exploited by the cunning boys"," he said.

But after the outrage, Sarkar who declined to comment on this issue put up another status on Sunday, defending his views, saying that he has the freedom of expression in this country. "Supreme Court has repealed section 66 A of IT Act and given freedom of expression in Social Media. When Taslima Nasrin wrote against a particular religion we supported her Freedom of Expression. We are supporting Bengali Poet Srijato who writes about Hindu Gods. Feminists also abuse men and patriarchy in seminar and Media. I have not written anything against any person, individual or anybody without any evidence or proof or any reference," says Sarkar, who claims to be doing social research and writing for the good and wellbeing of the society.