Shayaan told his parents that the police kept hitting him on his legs till he could take no more. His friends took him to the Holy Family Hospital later

Shayaan Mujeeb just got out of a successful surgery at Jaypee Hospital in Noida on December 21 but his parents the horrors have not ended — it will take a minimum of three months for Shayaan to walk again. A final year student of BBA at Jamia Millia Islamia, Shayaan was studying at the library. He wants to pursue Economics and dreams of studying at the Delhi School of Economics. But his dreams were interrupted when Delhi Police barged into the library reading room.

Shayaan told his parents that the police kept hitting him on his legs till he could take no more. "Then they asked him to run but he couldn't. His legs were broken. He was just outside the library, on the lawns. One of the police officers suggested that he hides behind one of the bushes so that no one gets to him — I am thankful to him. But that did not help. Another group of policemen found him and they beat him again," said Mujeebur Rahaman, Shayaan's father, who was in Kolkata at that point. His brother has alerted him that Shayaan's university was under seize. "When he took my call I could not understand what had happened. He kept pleading me to save him from there and kept saying that he will die if not rescued soon. But I did not know where my son was — it is a vast campus," said the distraught father. Shayaan's surgery, almost a week after the incident, was successful and Mujeebur was waiting to see his son. The doctors had denied going for surgery as his bone was exposed and had been infected. Friday night's medical inspection showed that the infection has receded and his surgery was scheduled for Saturday morning. 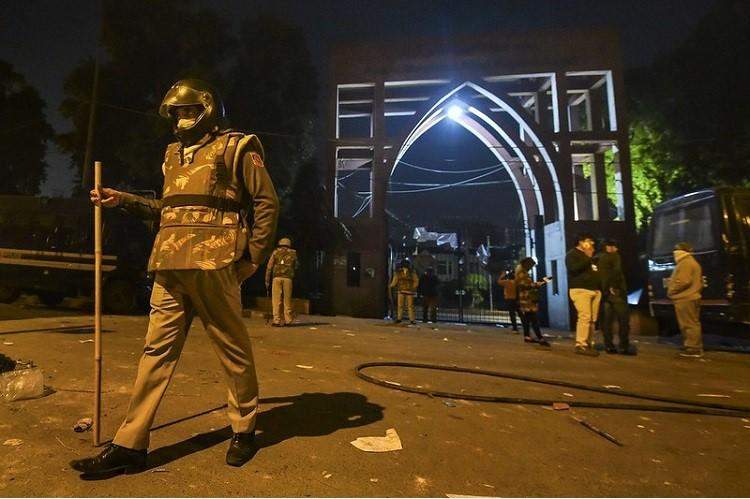 It is unclear how long Shayaan was lying in the bushes, helpless before his friends found him and took him to the Holy Family Hospital. "His friends, too, were being physically assaulted when they reached him. I am grateful to these students who chose to help my son when they had the option of running away and saving their own lives," added Mujeebur, a public sector employee and a resident of the national capital. He was on a business meeting at Kolkata and could return home only the next day. "My family could locate him (Shayaan) only after three hours when news came in that he had been taken to the Holy Family Hospital. We shifted him here (Jaypee Hospital) later when he was stable. Doctors said that both of his legs were broken and while they could fix one with a cast the other one was more serious and needed surgery. But at the same time, it was infected and until the infections in those open wounds were stopped they could not go for surgery," added Shayaan's father.

Mujeebur is one of those rare Indian parents who believe in freedom for his ward. He has no problem if Shayaan wants to join the protests once he stabilises and is cleared to regain a normal life. "If he thinks he needs to raise his voice he will. I don't want to stop him and I don't believe I can stop him. The students are more informed than most of us. If they feel the need to protest, they should," he added. "This is not a Hindu-Muslim issue. There are as many protestors from other religions as there are Muslims. Most of his friends and professors who came to visit at the hospital were Hindus," said Mujeebur.