MHRD says no more dharnas, calls for normalcy: Will JNUSU call off agitation after 50 days?

In what would look or seem like the end of the ongoing crisis at the Jawaharlal Nehru University regarding the draft hostel manual, the Ministry of Human Resources Development (MHRD) on Thursday said in a statement that the proposed service and utility charges mentioned in the document, would be paid by the Union Grants Commission (UGC). The students were always vehemently against the imposition of these charges that would have compelled them to shell out Rs 2,000 per month. However, the hike in the hostel room fee has been retained.

The MHRD in its statement said that the JNU administration and the JNU Students' Union will take immediate steps for restoration of the normal functioning of the university. It also added that the JNUSU will call off the current student agitation and facilitate the normal functioning of the university. "Further, students should hold no dharnas around the administrative, academic blocks and in the residential areas of the faculty and administration. and maintain discipline," it stated. This may have sounded like the almost two-month long struggle has come to an end and the students will call of their agitation, but that is not the case. The JNUSU in a statement in response to the MHRD proposal to resolve the crisis clearly states that the talks with the government body are still ongoing until the administration and the MHRD agree to the students' criteria for the restoration of normalcy — the feehike rolled back in its entirety. 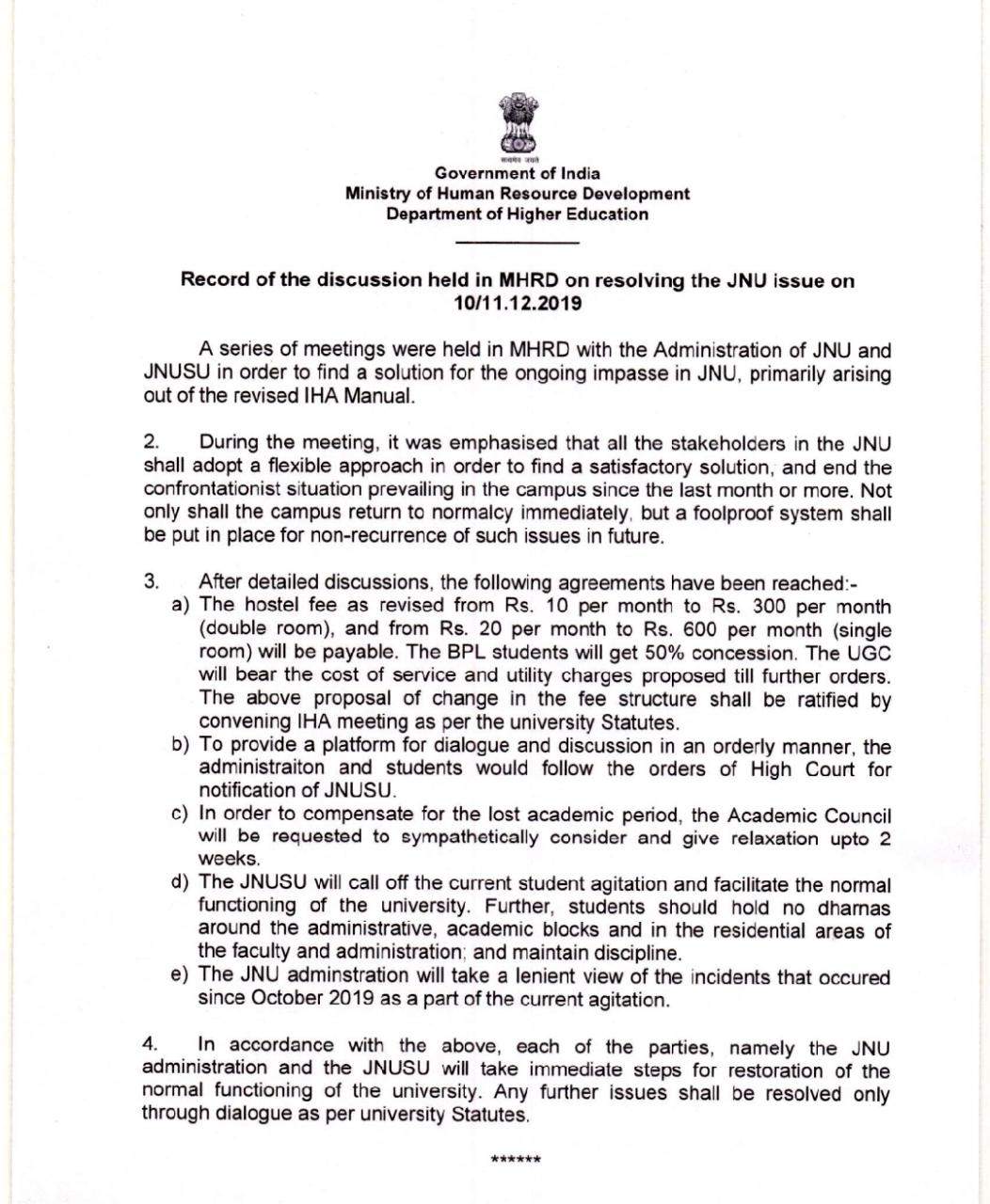 The statement by the MHRD comes after they held discussions with the varsity administration and representatives of JNUSU. "This has not been agreed to. Talks are still going on with the MHRD. This is not a consensus document in any way and we will continue our struggle until they agree to our demands completely," AISA National President and Former JNUSU President, N Sai Balaji said.

The MHRD statement, explaining the modifications to the charges, stated, "After detailed discussions, the following agreements have been reached — a) The hostel fee as revised from Rs. 10 per month to Rs 300 per month (double room), and from Rs 20 per month to Rs 600 per month (single room) will be payable. The BPL students will get 50 per cent concession. The UGC will bear the cost of service and utility charges proposed till further orders. The above proposal of change in the fee structure shall be ratified by convening IHA meeting as per the university Statutes."

The JNUSU said that despite the clear assurance from the MHRD regarding the service and utility costs, all other increases mentioned in the IHA manual must also be rolled back. "Until we have clarity on whether these will be withdrawn, the call of non cooperation shall continue. Similarly, we categorically stated that the room rent will remain as it was prior to the imposition of IHA manual on October 28, 2019," their statement added.