The tricolour story: Here's looking at the only place where all our national flags come from

As we celebrate India 73rd Independence Day, we find out the story of the only body in India which is authorised to manufacture flags

The tricolour forms a significant part of our lives right since our childhood, and its very sight is a proud moment for most of us. Ever wondered how and where Indian flags are made? The answer might surprise you a bit. Turns out, the tricolour can only be manufactured by one authorised federation in the entire country, the Karnataka Khadi Gramodyoga Samyukta Sangha (KKGSS) situated in the locality of Bengeri near the city of Hubbali in Karnataka. So next time you see a flag, you know the place where it should have been made.

The federation, founded on November 1, 1957, was originally started to produce products of khadi and other rural industries and to provide employment to the rural folk in the region.  KKGSS is not a government organisation, and it is a testimony to their standards of excellence that they have been tasked with this all-important responsibility. On the occasion of India's 73rd Independence Day, H Hanumanthappa, who has been the Chairman of the federation for four months now, talks to Edex about its functioning. 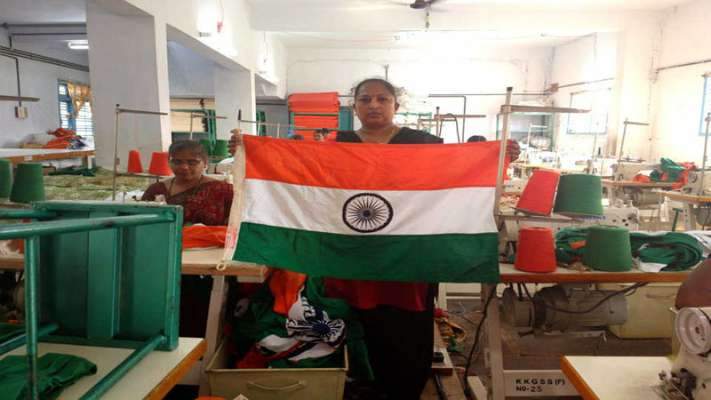 How did KKGSS end up being the only body that is authorised to manufacture flags?

A new Act was passed relating to the protection of national emblems like the flag, after which the govt turned its attention towards the flag. It should be of the proper dimensions and be respected. The Bureau of Indian Standards (BIS) has given a certificate and our organisation is the only one in India to have gotten it for the flag. We have been making flags since 2006.

Is the process of the flag's manufacture a secret?

No, it's not, it's all done in the open. It's a meticulous process, though. The thickness and evenness of the thread are important, and there are specifications for the cloth, the yarn and the dye. The dye shouldn't get washed away by rain. So all these things are tested for every flag.

You understandable experience a high demand before Independence Day?

Yes indeed. Since the past two months we have made 90 lakh flags. During the last year, we had a turnover of 1.5 crores just by selling flags.

Who are most of your customers?

They could be anybody. Many schools buy them. When H K Patil became the Rural Development Minister, a circular was issued to the grama panchayats that the flag was to be hoisted at the offices. So each grama panchayat was ordered by the government to buy three flags each. So government's initiatives also contribute to popularising the national flag.

Can you tell me about All India Khadi Gramodyog Vidyalaya, the college for textile chemistry?

The students are taught the very processes we use as part of a 15-month course. After the course, they can either join the same institute or join any other khadi industry.

Are other products manufactured too?

Apart from flags, about 1,000 artisans who produce all kinds of khadi products. The annual turnover is Rs 3 crore.

Flags of the following sizes are being manufactured at KKGSS

Steps in the manufacture of the flag: