The Visva-Bharati University authorities will not allow shooting of any film on its campus which may have a contrarian view about Rabindranath Tagore, said officiating vice-chancellor Prof Sabujkali Sen.  Sen, who took over as officiating VC earlier this month, said the Visva-Bharati would scan scripts to check whether that would go against the vision and ideals of Tagore, and hurt the sentiment of the people staying in the compound.

"During my tenure (as officiating VC), shooting permission will not be allowed on Visva-Bharati compound for any film project having a contrarian view about Gurudev Rabindranath Tagore," Sen said. Tagore had set up Visva-Bharati in 1921 and it later became a central university.

Sen has been associated with the Visva-Bharati for over four decades since she came to the university in 1971. The previous officiating VC had permitted a film and a part of its shooting has already taken place, she said, adding that she would ensure such things do not recur for future film projects till she is at the helm. Sen, however, did not name any film. 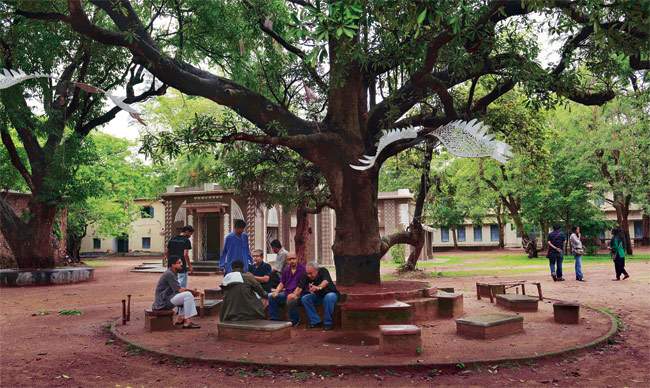 Under the scanner: Sen's predecessor Prof Swapan Kumar Dutta had okayed the script of 'Nalini', a bilingual movie, after an experts panel set up by him went through the original script and sought some changes which were carried out, the film's director Ujjwal Chatterjee said from Mumbai

'Nalini' is a Marathi-Bengali film on the relationship between teenaged Rabindranath Tagore and Annapurna Turkhud. She was the daughter of a family friend, based in Maharashtra, who had taught him Western manners before his trip to the UK.

"I have the consent letter of the Visva-Bharati and we don't foresee any problem during future shoots. We are currently shooting in Maharashtra," Chatterjee said. He said, "I am also a follower of Tagore's writings and ideas and we are aware about the sentiments involving Tagore and the sanctity of Visva-Bharati. We have also deleted one scene following the wishes of Visva-Bharati authorities."

A part of the shooting in the campus was done only after getting the go-ahead from the Visva-Bharati authorities after waiting for over eight months, Chatterjee said. The producers have also given an undertaking that there will be no deviation from the script that has been okayed by the authorities, the director said.