Forget Parrikar and #GirlsDrinkBeer, what do you make of Beer Yoga?

While young girls drinking beer and alcohol-linked concerns have been rife, we found that an international fad that fuses beer and yoga has slowly been making inroads. Who'd have thunk?

#GirlsDrinkBeer is a hashtag that you've seen and heard plenty of after Goa Chief Minister Manohar Parrikar's recent seemingly archaic statement over the fairer sex embracing barley. While the ruling party may back Parrikar on this anti-alcohol stance, they may be in a tight spot when they realise that beer has formed a rather uncommon union with one of their pet projects — Yoga! In a rising new national trend, Yoga — which the ruling party has sought to promote since it came to power — has now joined hands, or bottles rather, with beer to create Beer Yoga. No, seriously.

Beer Yoga, which involves doing yoga while drinking beer in moderation, recently entered the national capital and has since caught the fancy of yoga addicts. According to a member of Hobbmob Studio, the art studio in Delhi which was one of the organisers of one of the first Beer Yoga events in India, the response has been immense. "The response in Delhi has been great and other cities like Indore, Hyderabad, and Bangalore have adopted it. The response has been positive for the most part," she says.

The slurp pose:  Beginners can use a plank while Yoga experts can do a crow pose and slurp some beer from a can/ cup or bottle placed before them. Not only do you get your booze, but it also helps you strengthen your core and your arms. Hmm, handsy.

Hold my drink: This pose requires a sitting position and is famed for its effects of cleansing and refreshing. It also helps you calm your nervous system. This makes use of the seated spinal twist pose and is one of the easiest. Beer and chill, in simple words.

Downward Face drinking pose: This basic pose is that of a dog facing downwards. It's known for calming effects on the brain and also relieves you of stress and "mild" depression 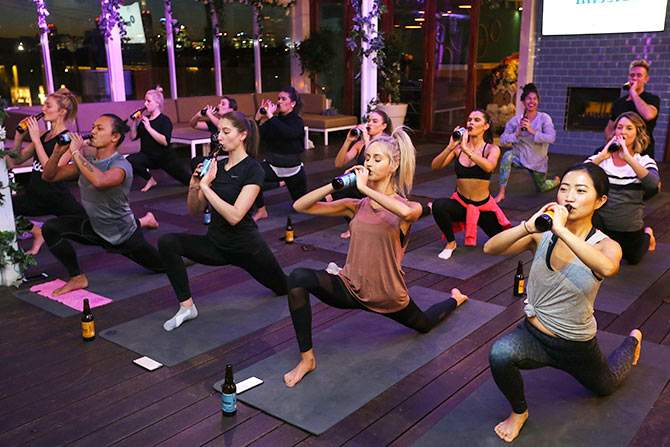 To beer or not to beer: While underage drinking is a cause for rising concern, innovating on the basis of Yoga seems to be an in thing

But is there a health benefit attached? Stability, flexibility and some Bira - at least that's what Hobbmob used. It also aims at bringing a fizzy twist to the one exercise most of us were forced to practice and even give exams for, when in school.

According to her, Beer Yoga also gives people a slightly different area and platform to socialise. And surprisingly, most of the participants have been women, contrary to the belief that men are amongst the majority beer consumers, "Women have been the most common participants. They seem to like it and are very involved," says the member of Hobbmob Studio.

When you're mixing beer with yoga, it stands to reason that there would have been opposition. She adds,"There has been some opposition from people who don’t quite understand the reason behind why we do this. Some people feel this might be against their Indian culture or society."  To the traditionalists, this bizarre fad may seem completely against Indian culture. As unsanskaari as it can get. But as far as Beer Yoga fans are concerned, at this point, it's all beer, no fear.