Students from St Peter's Engineering College, Avadi, are getting down and dirty as they clear trash and tree waste from the sewer tunnel that runs along the Ambattur Estate bus terminus

The white wall near Chennai's Ambattur Estate bus depot no longer stands plain and tall. It's a colourful deterrent to the thousands who urinate, smoke and pollute the area on a daily basis. How? Fifteen second-year students from St Peter's University, Avadi, set out on a personal social awareness campaign targetting social ills like smoking and drugs and extending to environmental protection. What is heart-warming is that these students discussed, planned and arranged the project themselves after getting permission from their HoD.

They didn't just stop there. The students singlehandedly cleaned the dry sewer of plastic and other toxic substances — some of which has been lying there since Cyclone Vardah hit. A pilot project that is still under work, if successful, it will spread to more places and include more people."This was a plan our group made and we limited it to that. If this is successful we will open this up to the public," said the vibrant students. They were a little concerned about how to tell their parents they were going to paint walls and haul garbage, but they needn't have worried, "We were initially a little sceptical of telling our parents because we were worried about how they would react but they were happy for our cause," gushes Jessy. 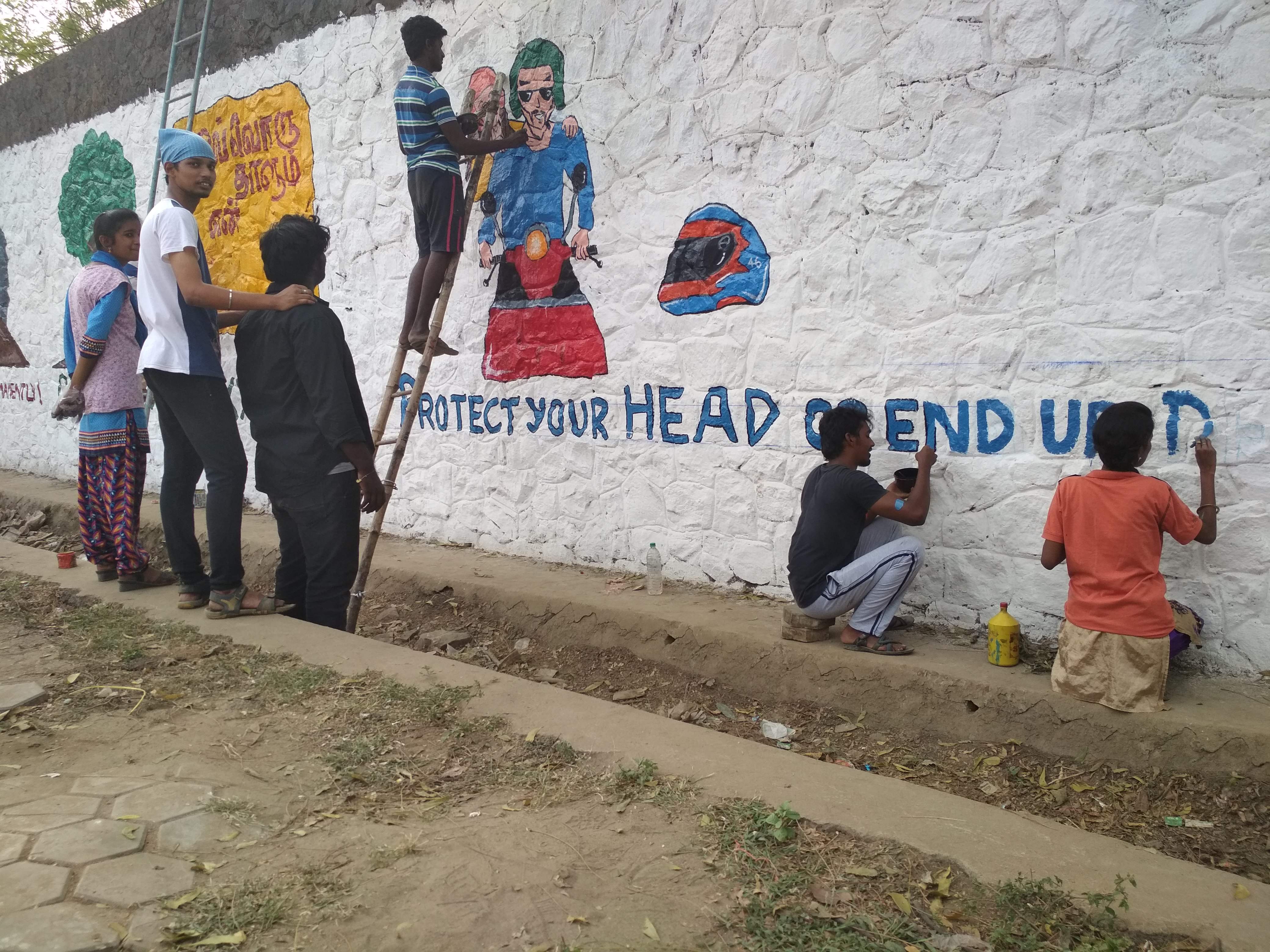 Dual use: The messages are in both Tamil and English to connect better with the folk passing by the bustling industrial hub | Maria Kuruvilla

The wall now has slogans like 'Protect your head or end up dead' and 'Grow a tree, you get oxygen free'. The messages are in both Tamil and English to connect better with the folk passing by the bustling industrial hub. But why are they painting walls when they should be cramming for final exams which start soon. "We know a lot of people who drink," says Sripriya, one of the students. "When we were cleaning here itself we found so many alcohol bottles," says Reegan B, with disdain. Busy bee: The idea was sowed by S Kavitha, a second-year student who with her co-campaigner Jessy Martina is busy colouring the white walls | Maria Kuruvilla

Her aim was simple, "We want people to realise what they are doing. We want to raise awareness and do our bit for society," she adds. The group had already drawn up plans to take this further and are set to paint the town red, among other colours. A first-time attempt, the students began on Thursday after getting permission from the Ambattur Estate Bus Depot manager. Once they started, to their surprise, they were asked if they could spread some colour at the bus stand on Friday."We never expected this. The manager asked us to paint the ticket booth at the bus stand and the wall will be inaugurated by the Regional Manager on Saturday, " says V Kannan, a group member. The best and most inspiring part is that this isn't a publicity stunt. Some of the reactions they got from passersby were truly amazing, "We were so surprised because we never expected feedback or positive response. People stopping at the bank actually came and brought us juice and snacks. We really never even imagined this," says a beaming Jessy Martina.