EXCLUSIVE: There were arrest warrants against Kanhaiya Kumar, I'm sure it'll be the same for me: Geeta Kumari, JNU's newly elected Student Union President

An Army child, JNUSU prez-elect Geeta Kumari is not wasting any time celebrating her victory. She is already working out ways to handle both issues plaguing the university as well as the country

After the general elections, probably the second most exciting election in the country is the JNU Students Union poll and this year was no different. This time though, because the general atmosphere in the country — a constant swinging tussle between the Right and the Left — is more tumultuous than ever before and in a campus known for its strong political ideologies, there was obviously going to be a tough fight.

Eventually, the United Left Alliance proved to be too good to beat and JNU will now go on to have its first female president in the last five years — Geeta Kumari. The president-elect has spent six years at JNU, she has done her Bachelors in French, her Masters in Modern History and is currently doing her MPhil- PhD integrated course in Modern History as well and she has been an activist with the All India Student Association since day one at the University.

She sits down with EdexLive for an interview a few hours after the results were announced.

Congratulations. Did you think you would sweep the elections this way?

Well, you hope that something like this would happen but you never really know for sure until the end. But AISA and the other parties have been working very hard and I've also been an activist with AISA for six years and I've worked very hard so I was quite hopeful.

What was the reason behind the Left parties deciding to unite this time?

Till recently, no government has ever attacked a University, but over the last two years, the State is policing the students. Even big leaders in the country are demanding that JNU should be shut down. The Left has nurtured the JNU campus, it is what makes us unique, so why take a chance? That's why all the Left parties decided to put their differences aside and come together. This was also a demand the students themselves made after the February 9 protests, they wanted the Left to unite so that we become a stronger front. 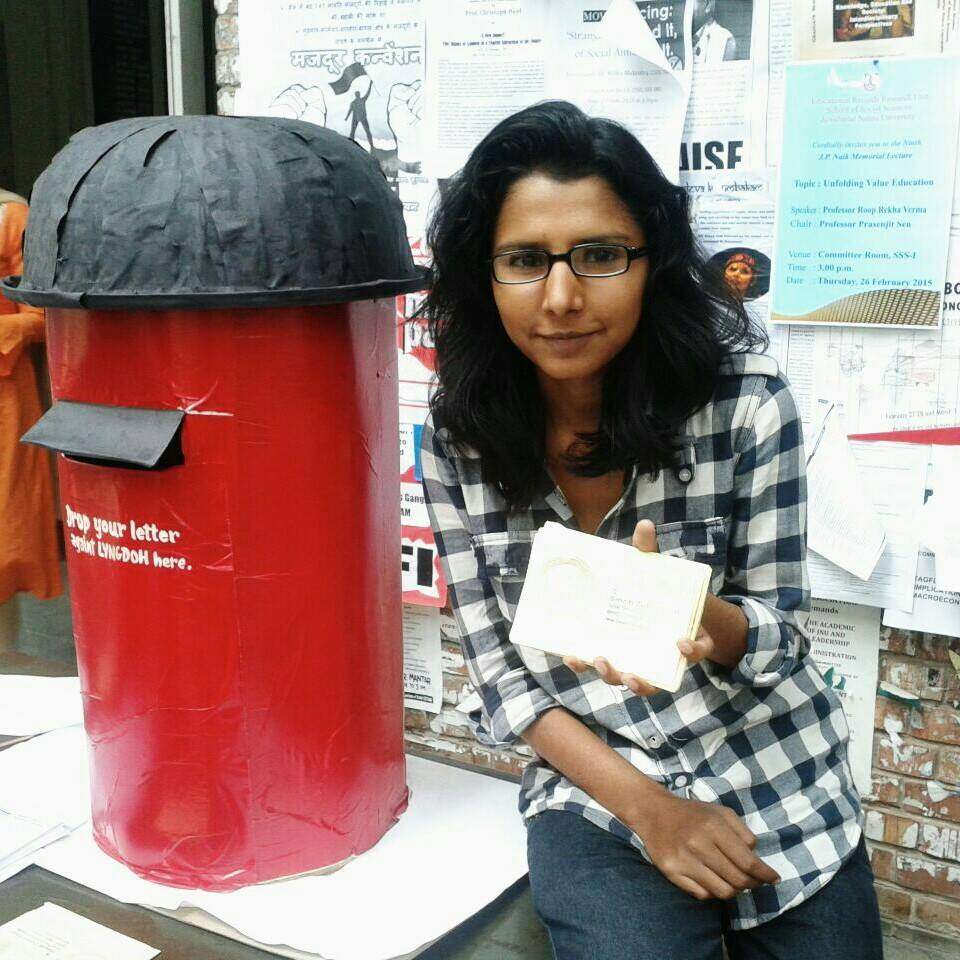 The administration is out to destroy the University and all our students have to come together to save it. Mohit not getting admission this year is an indication that the administration can go to any lengths to stop us but the basic ethos of this country is democracy and freedom to say and do what we want to say and do

What is your agenda for the new academic year?

The first thing is to build a political movement for Najeeb. We will also focus on the seat cut issue and will work to bring back the deprivation points. The deprivation points not only benefit people from less privileged backgrounds, it has also benefitted many women on this campus. Even the reservation system was not implemented properly this year. We have to bring autonomy and democracy back to this campus.

Besides this, this year we will ensure that student representatives for the Gender Sensitivity Committee Against Sexual Harassment (GSCASH) will be appointed. Also for the last two years, despite having the funds, no hostels have been built. There are boards that say that the hostels are going to come up in certain locations but there is no sign of any work, so we will ensure that it happens soon.

How do you plan on working on the Najeeb issue, so far there seems to be no lead?

We want to create a political movement to ensure that his family is given answers. Even the court has said that the Delhi Police should have done better. We want to hold people accountable for what has happened and we will continue to remind everyone that we have not forgotten Najeeb and we will never forget him. One of our students is missing, it is our responsibility to find answers.

The last two Student Unions have had a lot of trouble with the administration. Both Kanhaiyya Kumar and Mohit Pandey had arrest warrants and FIRs filed against them. Do you think that coming from a Left alliance, the pressure will be transferred to you as well?

Yes, I'm sure it'll be the same for me. The administration is out to destroy the University and all our students have to come together to save it. Mohit not getting admission this year is an indication that the administration can go to any lengths to stop us but the basic ethos of this country is democracy and freedom to say and do what we want to say and do. JNU is one of the most inclusive universities in the country and it allows people from all sorts of backgrounds to pursue higher education, especially women. We wouldn't have the same opportunities if JNU didn't exist so we can't let anything happen to it. 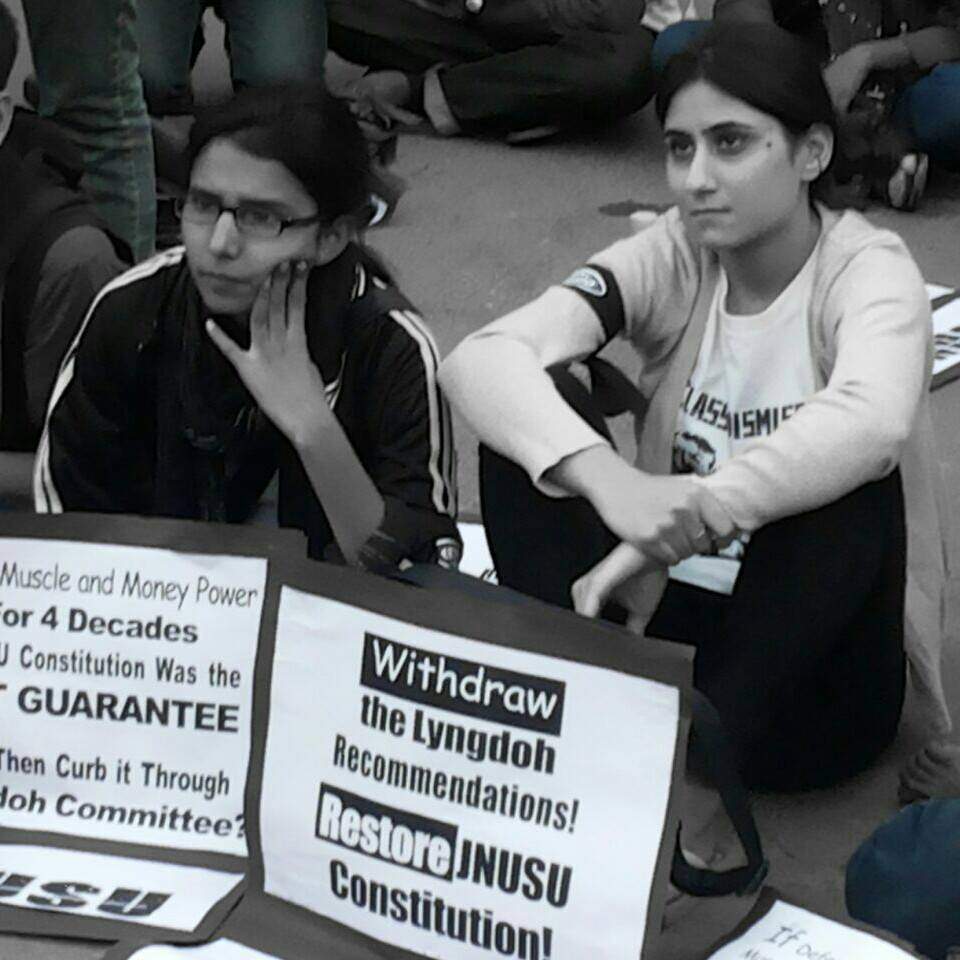 How are you going to handle the fact that the administration continues to be against you? Will you try to have a dialogue with the VC?

Of course, we will try to have a dialogue with the VC, we have tried in the past as well but the way he behaved with the previous student union shows that he isn't ready for a dialogue. Our ideology is to debate issues, so that is what we'll do. We just hope he'll meet with us and listen to what we have to say.

Over the last few years, protests have been quite aggressive or they have been made to seem that way. Do you think your Union will choose to take a more passive approach this year?

Depends on what the VC wants. He seems hell bent on getting the police into the campus. Advocate Monica Arora has also said that there should be a police station on campus. Why would any student want the police on campus? Also, this is not the first time that JNU is protesting, we have been protesting for years. The protests have never been aggressive or violent, there has never been the need for police on the campus all those years. I'll give you an example of how things worked in JNU, once a student sat on a hunger strike against the VC and in response, the VC did the same thing, he also sat on a hunger strike. This is JNU culture. We give respect to our leaders and we don't misbehave with anyone but if something is wrong we should be allowed to hold them accountable. And here, the VC is accountable.

The word anti-national was coined after the JNU incident and citizens are having to prove their patriotism every day. You come from an army background, probably can't get more patriotic than that. How has that shaped you?

Having an army background has made me very disciplined. I grew up with the best facilities, army school campuses are just like the JNU campus. So I have already lived in the same atmosphere all my life. So because I come such a background I have a sense of doing something for society. I have cultivated the attitude to give back to society and help it improve. My father comes from a very poor background but the army gave us a home. There are lots of others from very poor backgrounds so I was always socially aware. So being socially aware pushed me towards the Left movement. I realised that is where the real issues are spoken about and that is where change can happen. 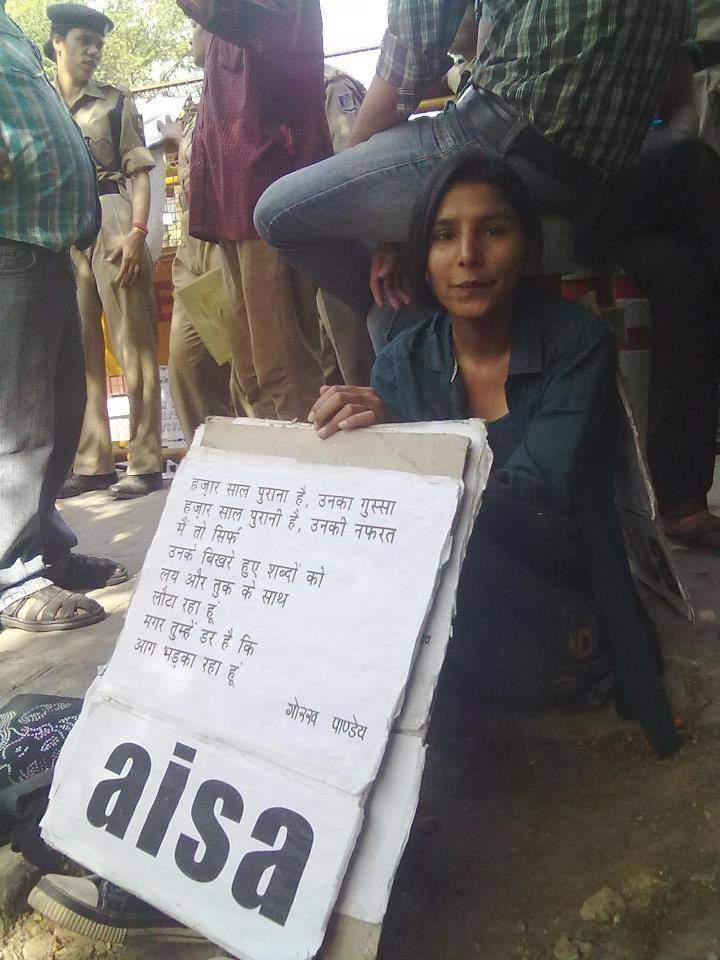 JNU is a place that represents the student movement across the country and we are the opposition to the government, we are a ray of hope to the country. JNU has never been an island, we have always related to movements across the country, so yes, what happens here matters

Was it difficult to take the decision to stand for the election? It's definitely not an easy job. Are you relieved by the results or are you stressed about what is to come?

It was a party decision. I've served as an activist for six years, so they decided I should stand. No, I'm not relieved at all, there is so much responsibility on my shoulders now and things are only just starting now. The atmosphere in the campus and the country is pretty sad so we have to get down to work soon.

Why do you think the JNU elections are important with regard to the country politics? Do you think it influences the country's politics as well?