Does your cafe offer freshly brewed stories or a date with your thoughts? Well, Backyard is your space

In a bid to make a comfortable 'space' for Chennai, the two young founders have succeeded in setting up an anti cafe that inspires, engages and just lets you be, well you

There’s something in the air at Backyard. As you enter this world plastered with post-it notes and colourful speech bubbles, a waft of fresh coffee and notes of a violin being played by a lone gentleman in a corner welcome you. But the air is filled with a vibe even stronger and you don’t know what it is until you meet Akshaya and Nithya, the two girls who decided to make their dream space a reality.

Nithya Fernandez, whose thesis was on co-ideation and Akshaya Chittybabu, who had worked on storytelling, decided to put the two together and create a space where ideas and stories could flow. “In college, we were given a lot of freedom to experiment with different designs that we wanted to create. A lot of people associate architecture with just buildings, but you can actually do anything with space,” explains Nithya.

At Backyard, located in Adyar, you pay by the hour and any food you get is prepared by homemakers from the area.

Freshly out of college, they merged their ideas and found the perfect space. A year after their graduation, the duo had designed and decorated Backyard just as they had imagined. Their research, where they calculated their budget and studied the requirement of the city, spanned over a few months. “We had planned it carefully and knew that it would work. This is exactly what we had imagined!” says 23-year-old Nithya, excitedly. 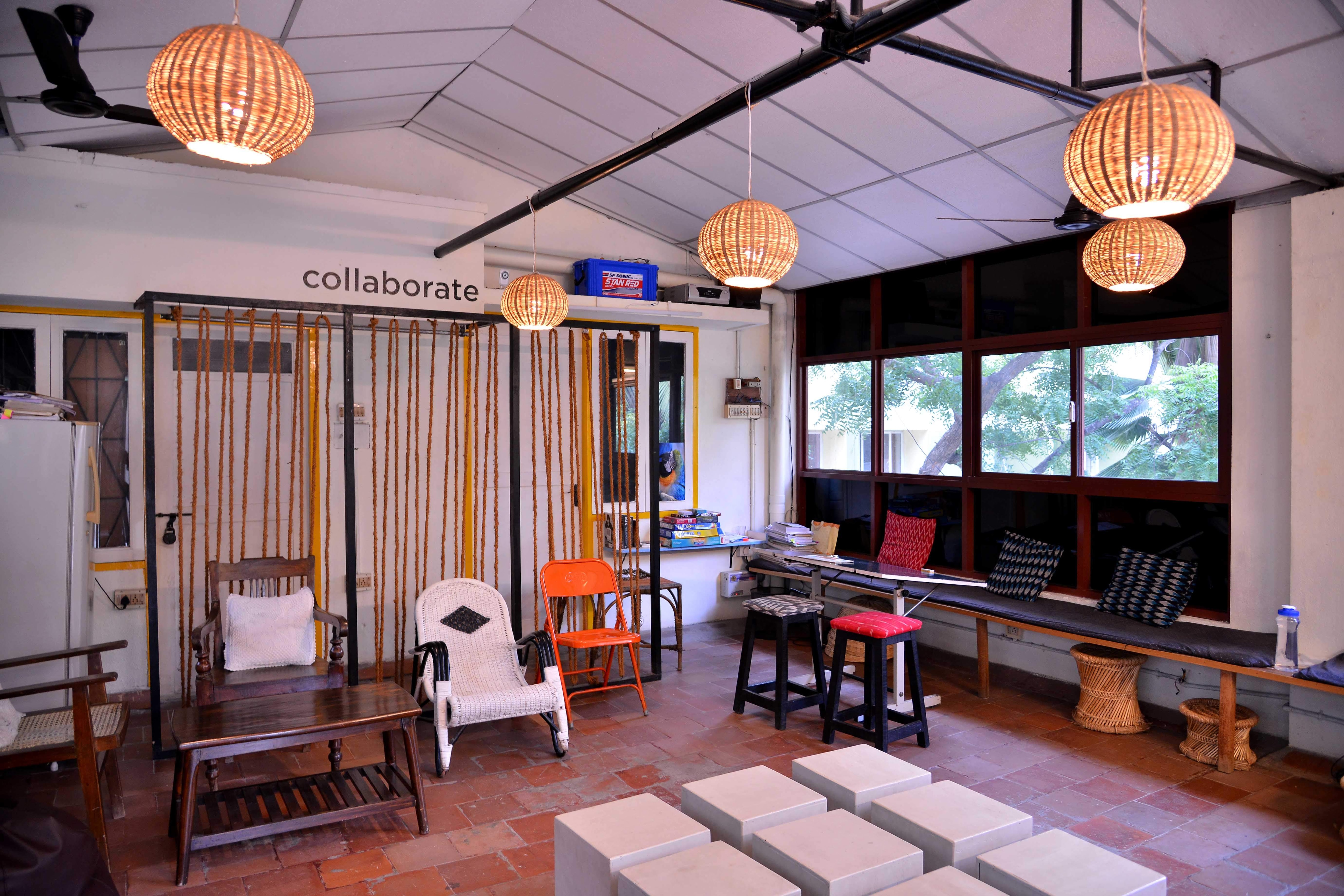 Spaced Out: Storytelling is an integral part of Backyard, whether it be in conversations or the doodle art in the last page of that book

“We wanted to restore what coffee shops represented in the past when people would discuss their ideas and share stories,” says 22-year-old Akshaya, “That idea of conversations across tables is what we wanted to restore. So we created an open level where anyone can come to ideate. It can be anyone working on their laptop, dancing or painting. Why can’t it all happen within the same space?”

Every space is different. Right now, the café relates entirely to Chennai and the sort of space people here would want and deserve

But do the stories ever collide? “If you think it will, it will,” Akshaya says with a smile, “You can have your solitude and you can have your discussions. It happens here every day.” Look around the room whose walls are painted in large bold letters with words like ‘express’, ‘brainstorm’, ‘collide’, ‘interact’ and ‘converse’, and it’s true. Strangers sit on cushions and mattresses, giggling at each other’s jokes.

Akshaya points to a girl who studies in a corner every day and hasn’t spoken to anyone yet. The communal table is dotted with glasses of half-finished tea and notepads filled with ideas. These people have made themselves at home.

“This is not a café because it’s not about the food. It’s about the people and their conversations,” adds Nithya. At Backyard, you pay by the hour and any food you get is prepared by homemakers from the area. “We’ve always been forced to work in these confined spaces. It’s either work from home or work from office. We are trying to break that. This is a space that you can have in between and you can use it to meet new people or create ideas,” explains Nithya.

“No, we are not storytellers ourselves!” the duo say in unison before we could finish the question. But take one look at the picture-covered walls, the colourful pins on the giant map of Chennai or the people sitting in their corners drinking their tea with beaming smiles on their faces, and one would argue that these two youngsters have told one long beautiful story.