As a student, she helped her friends prepare for exams. Now KP Sindhu started a peer-assisted learning initiative that made life easier for her students

Sindhu K P has many tricks up her sleeve to get the basics across to students, because she believes that getting them right is the key to everything

Remember that one student who would be surrounded by classmates one hour before the exam answering questions like, ‘What should I study to pass?’ and ‘Which question will definitely come’? The same student, when presenting projects to the class, was told that they should become a teacher because they explain concepts well. Sindhu K P, Assistant Professor in the Department of Polymer Engineering at B S Abdur Rahman University, Chennai, was that student. In fact, her professors at IIT Delhi, where she pursued her MTech, would often say, “Please don’t go into the corporate world. Become a teacher.” And so she did.

People ask me why did I reject offers from TCS and Aditya Birla to become a teacher. What can I say? I am simply passionate about teaching

We caught up with the lighter side of the academically profound (216 rank in GATE 2011, among many other achievements) Sindhu who tells us that teaching is her passion, and also concedes in good humour that she simply loves to talk! “I love explaining concepts. In fact, when I was studying I used to call friends over and explain the concepts to them, patiently,” says the Kanyakumari-born teacher, adding that it also prevented her from falling asleep while studying alone.

Talking about patience, or rather the lack of it, Sindhu, the daughter of an ex-Indian Air Force officer, says that nowadays students just want everything served on the table and ready to eat. “They must have the patience to learn the basics,” implores the Ph.D. research scholar. And for those who don’t have this virtue, she has some tricks up her sleeve. For those students who directly jump to learning the application rather than the theory, the assistant professor has flipped classrooms, where she exposes the students to a theory first and after a few days, gives them questions which help them apply the theory in real-time. “This way I discuss the problem at the application level, not the theoretical level — which makes it interesting,” says the 27-year-old. How theoretical: For students who skip to application rather than theory, Sindhu gives them the theory and then the questions

Another method she follows is peer-assisted learning, which allows students who are articulate and know the subject, to teach their own classmates. She has also provided guidance to students for the Innovation Contest conducted by the Abdul Kalam Innovation Centre at their university. The idea of a portable water purifier — a water bottle which purifies water within 10-15 minutes of it being poured through it — was suggested by Sindhu, whose father would often complain about the poor quality of water at the borders when she was younger. This concept bagged both the prize and funds. 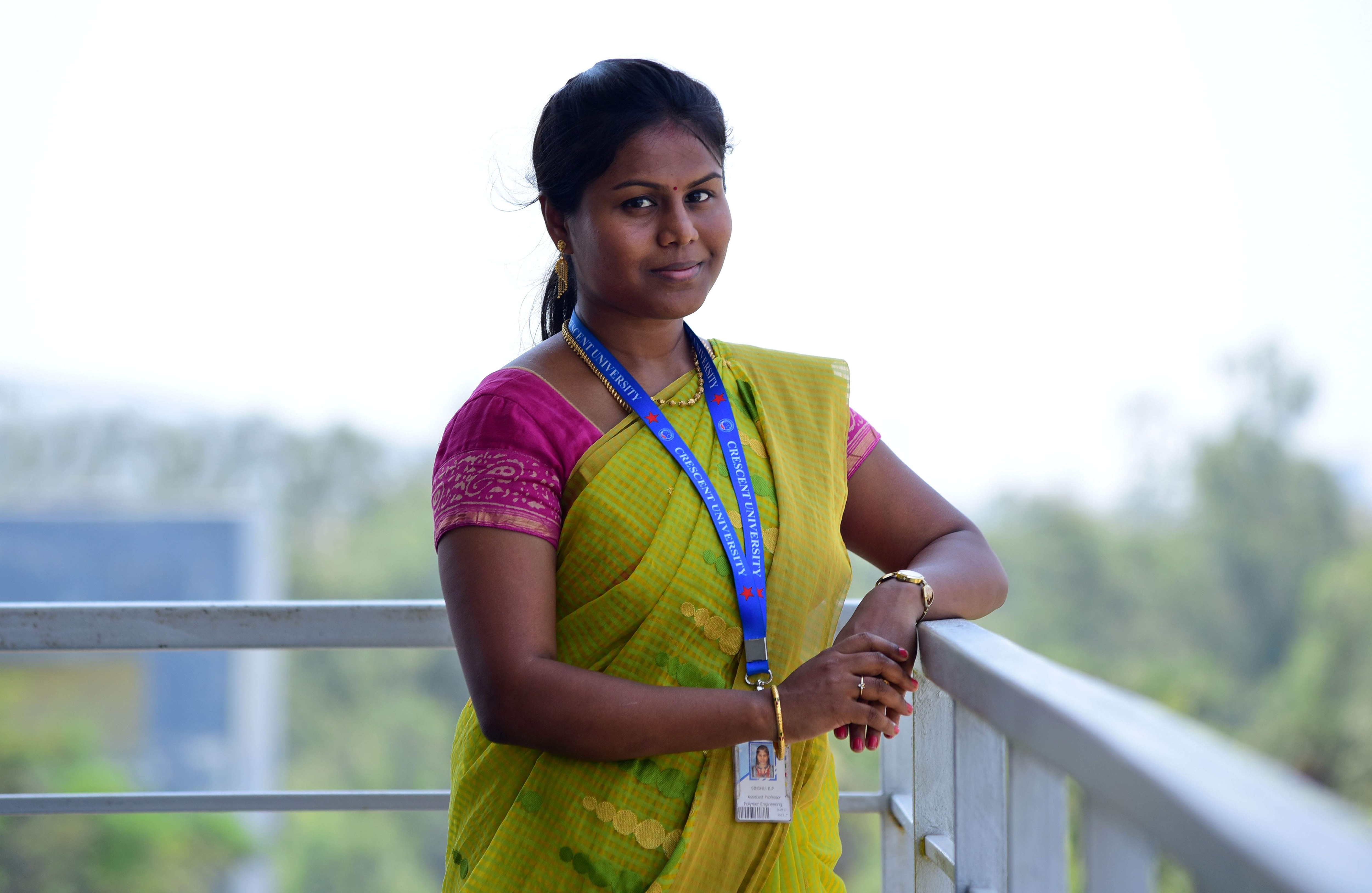 A guide: She has  provided guidance to students for the Innovation Contest conducted by the Abdul Kalam Innovation Centre at their university

Sindhu does all this in an attempt to make students understand that, “You can learn the technical parts of its anywhere but applying them to make society a better place is what you should focus on,” she says. Sindhu, who feels that the responsibility to inculcate this feeling falls on the teachers. She expresses her passion for polymer as she recalls how she urged a few friends to travel to her hometown, the land of rubber trees — Kiriparai in Kanyakumari — for their compulsory industry training.

She asserts that this field has scope for everyone, especially in these aspects of research and development. Sindhu, when presented with job offers from Aditya Birla and TCS, rejected them to pursue this noble profession. She is still asked why she became a teacher after completing her M Tech from an IIT. Her answer? “I like this profession,” she says.