Remember the Sikh boy who went viral for doing the Bhangra before an oratorical competition in the US? This is the story of J J Singh Kapur, uncut and unabashed!

The High schooler who went viral for doing the Bhangra before a speech competition in the US, talks about Seinfield and MASH and how he wants to become a civil rights lawyer

A couple of weeks ago, J J Singh Kapur was all over the internet. You remember him, right? He was the boy with the red turban who started off an oratory competition in the US by rocking a mean bhangra! Insane right? Well, the high schooler won the competiton and became a celeb overnight. His speech then went viral, but it wasn't just because he had such a distinct way of delivering his speech but also because he also raised a few eyebrows with some of his controversial statements. Some of these statements were about Gandhi's alleged controversial sexual history that ruffled a few feathers. He talks to EdexLive about growing up in the USA, how he started elocution, his plans for the future and the Gandhi controversy.

These are testing times, especially in a country like America. As a turban wearing Indian-origin high schooler, how do you get on in your day to day life. What keeps you going? Do you have anybody that you particularly look up to?

Divisive rhetoric has plagued the US presidential election as well as our media. Now more than ever, it is crucial that minorities living in the United States stand up for their beliefs. In these challenging times, I have always looked up to my father. He has instilled in me the importance of tying my turban each morning and, layer by layer, remembering the sacrifices made by our Sikh gurus to keep our religion alive.

Was this the first time you started off your speech with a dance or have you done that before? Do you actually like to dance, or was it just for the speech? What are the other unusual things you've chosen to do during other competitions?

I always like to grab the audience's attention whenever I begin a speech. This year I performed a Bollywood dance from the movie Bride and Prejudice. I love dancing — especially Bhangra — so this was a chance to showcase my dance moves (and terrible singing voice). Last year, I began a speech with the New Zealand National Rugby team's warrior dance known as the Haka. If you don't know the fierce Haka, look it up on YouTube.

You did receive quite a bit of criticism over your statements. Did that affect you at all? How did you handle it? How did your relatives react to it?

Overall, I received many warm messages and compliments about my speech. Many individuals, especially young Sikh boys across the country, were empowered to wear their turban with pride after listening to my message. While others were not so receptive to my content, it is important to remember that each and every human being is entitled to their own opinion. For many years, I have been my own biggest critic. Now I have learned to take criticism with a grain of salt and move forward.

How did you choose the subject for this competition? Before the speech, were you by any chance worried about the backlash you would have to face when youcriticised Gandhi on stage?

This speech was written to highlight the dangerous single stories and stereotypes Americans developed after the attacks on September 11, 2001. This speech was never designed to be a criticism of Gandhiji. I am not "out to get" anyone — so I was disappointed to read the backlash on social media. I made it clear that Mahatma Gandhi should be revered and respected, but I also wanted to point out the other less desirable aspects of Gandhi's story to highlight that not everyone is perfect. I used humour to get this message across. I sincerely hope the primary message of the speech — to deconstruct simplistic narratives — is not overshadowed by a single anecdote.

I felt very blessed to have been able to compete at this level. I know that not a lot of people get to speak on the final stage like I did. Before every round, I would remind myself that I’m giving this speech for Waheguru, I didn’t think about anything else. I listened to Deh Shiva before I walked out onto that final stage. I wanted to embrace every round like it was my last — winning never once crossed my mind

How was it to grow up in the USA? You seem to share close ties with your family and community. Can you tell us a little bit about that?

Yes, I was born and raised in the United States in a state called Iowa. Iowa is a primarily agricultural based state; it provides much of the corn and soy beans that run our country. Both of my parents immigrated here. My father is from Singapore and my mother is from New Dehli, India. Family and tradition is very important to me. Every day I try to keep alive my Indian cultural roots on American soil. 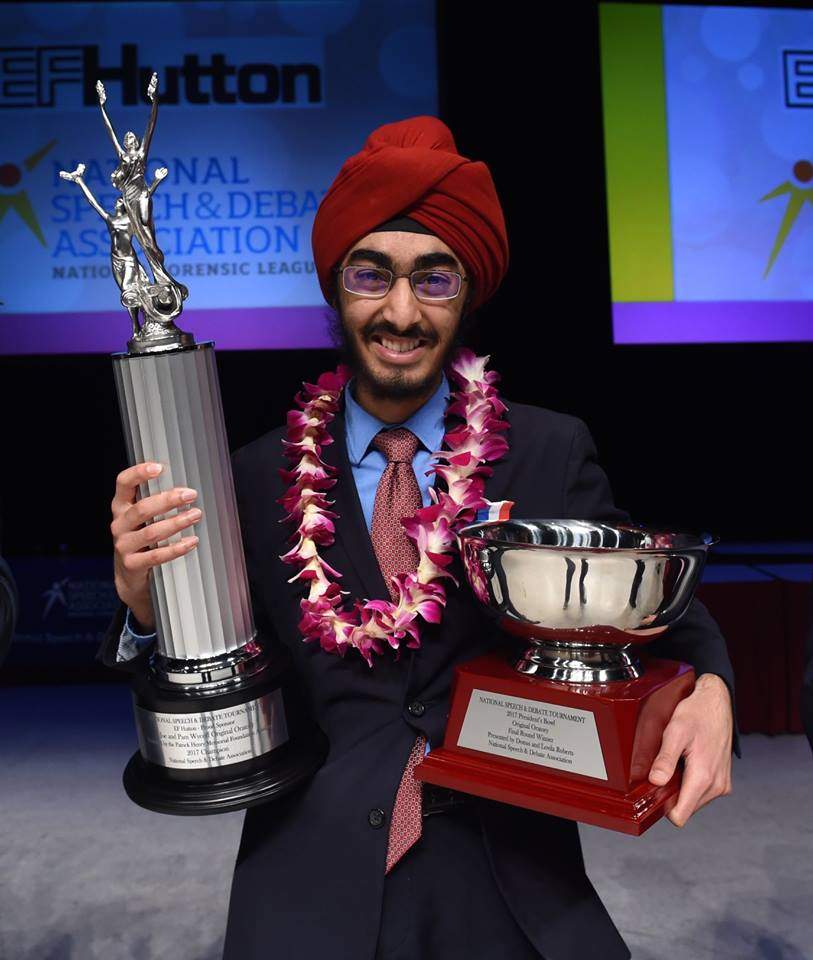 The Orator :  JJ Singh Kapur after winning the 2017 National Championship of Original Oratory

How did you get into oration? Which has been your most memorable speech till date? Is there someone you particularly admire or aspire to be like?

Actually, it was my father that really enriched me with a love for elocution. When I was growing up, my father would play with me a game called "Table Topics". Objective: to speak continuously, for one minute, about a randomly assigned topic. Every time I froze during my speech or used filler words — um, oh, like, so — my father slammed a hammer against the table. As a young child, I grew strangely addicted to this game. I recall standing poised in front of my family members at the dinner table, my father’s hammer in hand, speaking effortlessly about gulab jamun.

Are you going to continue participating in oratory competitions in the future?

I do plan on participating in future oratory competitions during my senior year of high school this coming semester.

Besides public speaking, what are the other things that interest you?

I enjoy spending time with my family in my free time. We have recently become addicted to American television shows like MASH and Seinfeld, which we usually watch during tea time. I also enjoy strumming my classical guitar or playing soccer with friends.

What are your plans for the future? What do you plan to study further and where do you see yourself in five years?

I plan on studying Political Science in college and hope to one day become a Civil Rights lawyer. That plan is certainly not set in stone. Whatever career I do end up in, I hope to amplify the voice of marginalised groups across the United States and around the globe.