Are you an admirer of Warli art? Then, check out the walls of various govt schools in and around Chikkaballapur. Santosh Kumar, one of the art teachers and his team is responsible for this change

Our government schools should be no less than any private school when it comes to infrastructure, says Santosh Kumar, an art teacher in a government high school near Chikkaballapur located in the outskirts of Bengaluru. This is the reason Santosh and a team of other art teachers of government schools in and around Bengaluru have been painting the school walls beautifully for more than four years. Though Santosh's work has been recognised earlier by bureaucrats in the education department, recently, one of the pictures posted by Uma Mahadevan, Principal Secretary, Rural Development and Panchayat Raj went viral on Twitter.

You might be wondering what's unique about Santosh's artwork that it went viral. This picture features science motifs drawn in the form of Warli art, painted on the recently renovated government high school in Muddenahalli village — the birthplace of Sir M Visvesvaraya. Santosh explains, "We have formed an association called Drawing Teachers Association and have been painting school walls for more than four years now. While we do different forms of drawings, Warli has won both teachers and students' hearts. In fact, a lot of students who drop out from schools or those from private schools shift to government schools. The walls that we painted at the Government High School took us 20 days to finish." 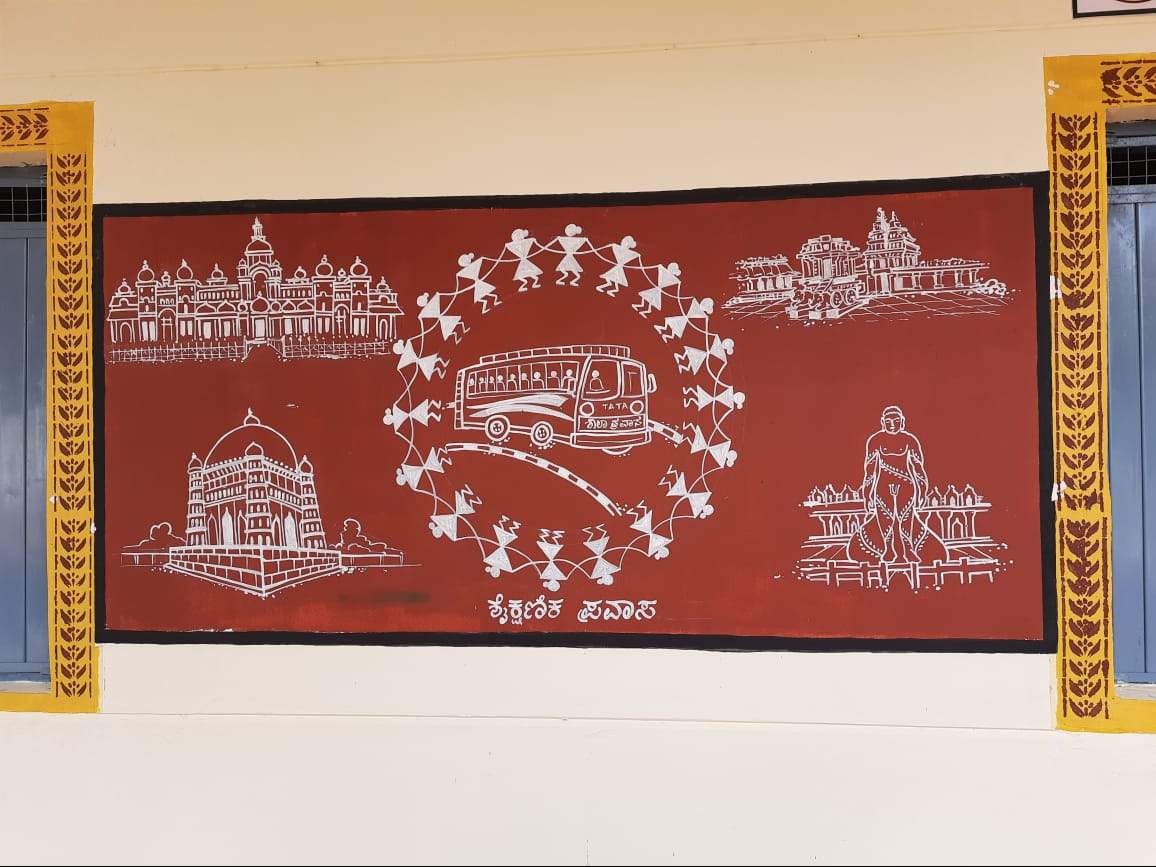 Santosh feels that he has never seen such a beautiful atmosphere and environment like the one at Muddenahalli Government High School. Situated almost at the top of the hill, the school is huge. Apart from classrooms, it has a science lab, a sports room, a meditation room and a library. "The Warli art done on these walls bear a connection to the tasks that are done in these rooms. For example, we have painted figures of people doing experiments and working with various equipment in the science lab. In the sports room, there are figures playing different games and sports, some in different postures of yoga etc. Aside from this, we have painted different festivals of India on the school walls. Recently, the Government of Karnataka introduced the Vidyagama programme for government schools. We have painted the same pictures on the school walls so that children remember how education was in the times of Corona," he explains.

Santosh believes that art teachers must not restrict themselves to teaching art only during their classes. He says, "There are many kids in the school who struggle to draw maps in Social Science class, diagrams related to Science and Maths. Hence, what we do is we help them draw these by teaching them easy steps and methods. A lot of students have even thanked us personally for doing so. As a result, it has expanded opportunities and the horizon of teaching for art teachers." 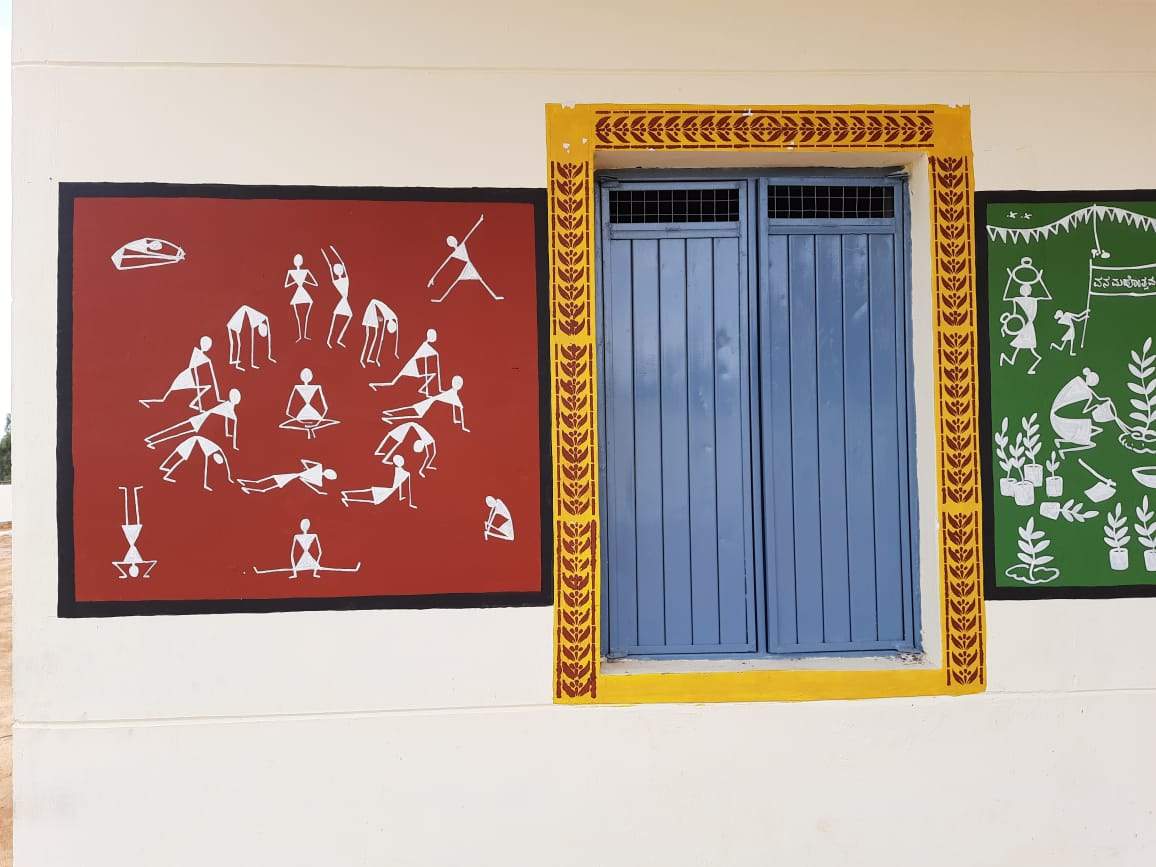 Hearing the contributions they have been making as art teachers, we ask him how many school walls the Drawing Teachers Association has painted so far. Santosh replies, "We have painted the walls of more than 20 schools and some walls in the parks. Since we are government teachers and have our own classes to tend to, we can't go to every school by ourselves to paint the walls. A particular school headmaster or a Block Education Officer calls us and assigns us the schools. They provide us with paint and other materials and we paint the schools for them without charging a single penny. After all, these government schools belong to all of us."

Here are some more paintings that we found unique: 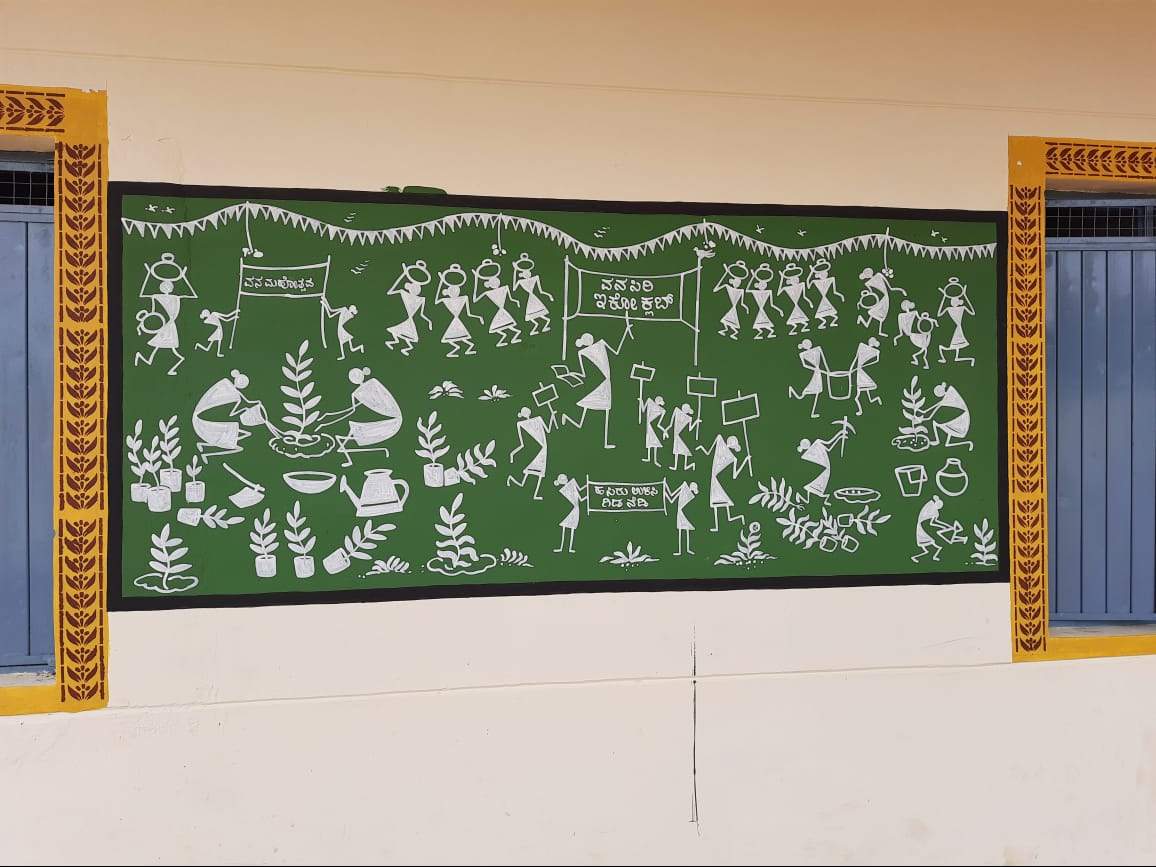 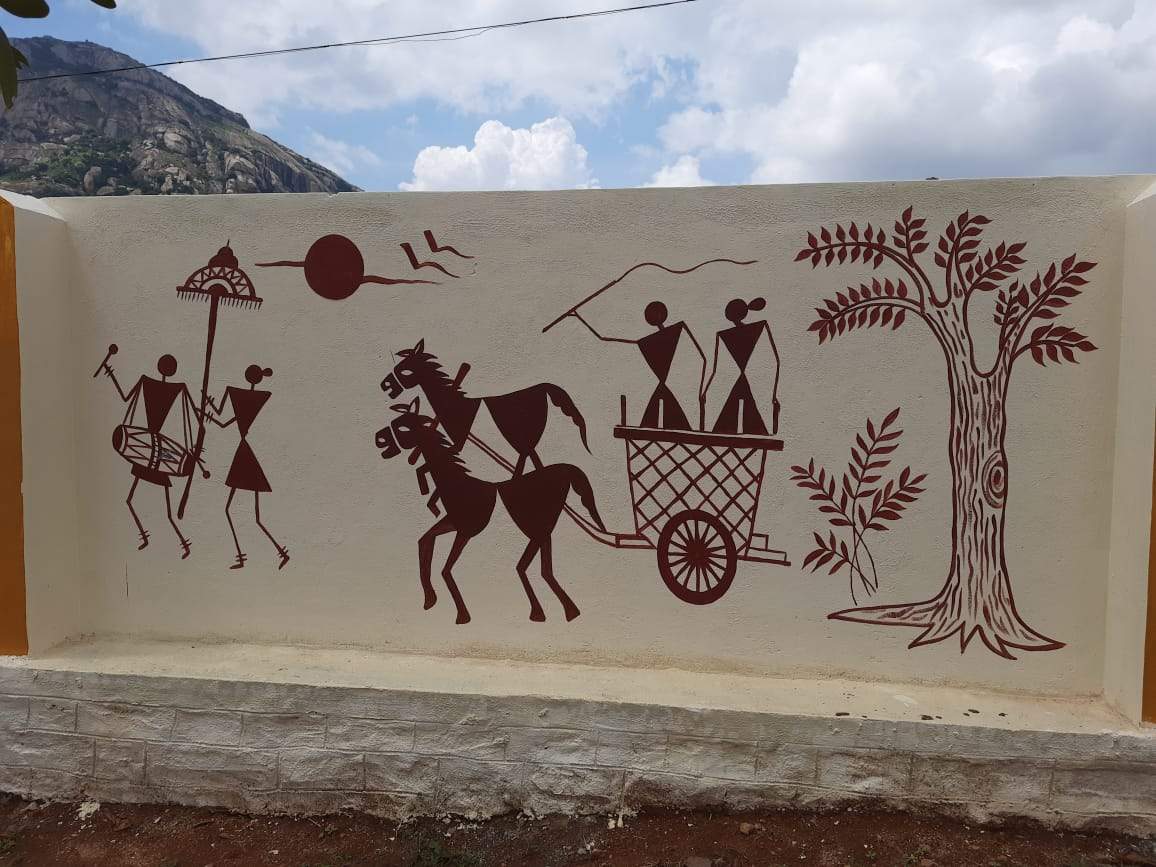 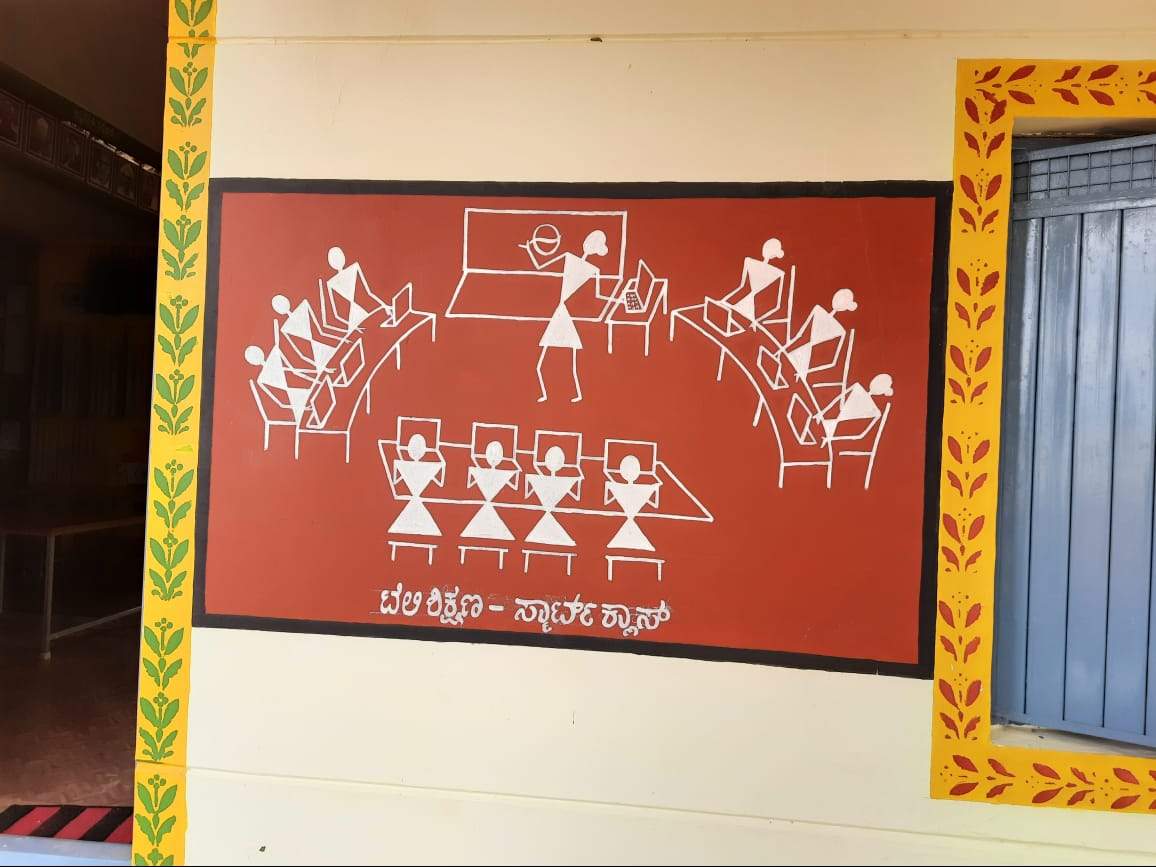 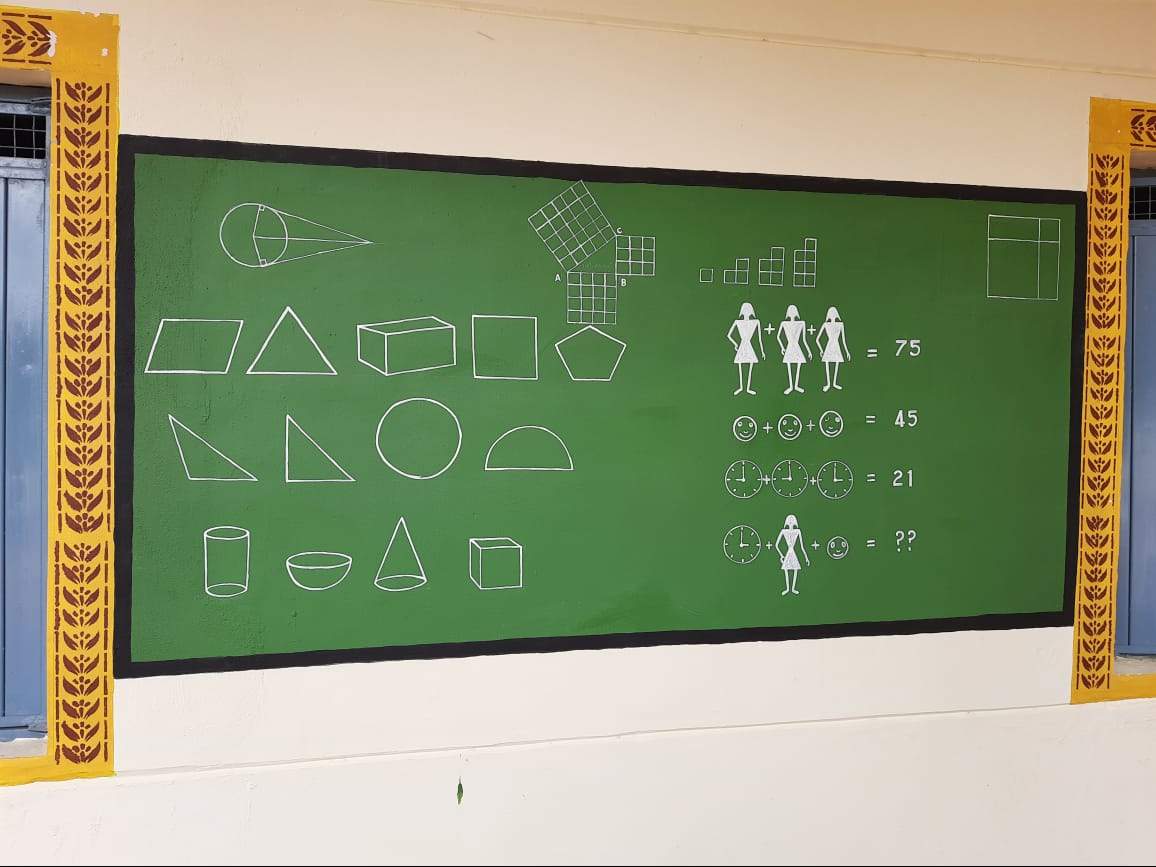