VIT-incubated start-up Punar Healthcare's IoT-enabled, robotic rehabilitation solutions are 'moving'. This is why

Assistive, robotic and smart — Punar Healthcare, a start-up incubated at VIT, is working on devices that will allow doctors to remotely monitor the exercise patients do. This is indeed the future

Necessity is the mother of invention is a statement that rings true for Charmi Pabari. And it came about when her maternal grandfather suffered from a heart attack while residing in Talala, a taluk in Gujarat, from where the nearest hospital was 20 km away. As a consequence of suffering from the attack, one side of his body was completely paralysed. After that, a doctor had to visit him every day for physiotherapy sessions which Charmi felt weren't as beneficial as they could be. "At that time, I was pursuing my BTech in Biomedical Engineering and was learning about rehabilitation," says the 25-year-old. And that's how she came to build a bilateral rehabilitation device for the upper body which could be used after the patient has recovered at least 40 per cent. But what about before they hit the required percentage? A quest for finding an answer to this question led to the launch of Punar Healthcare in April 2018. Getting the team together
Confident enough in her abilities, Charmi decided to take a pass on placements, to opt for an MTech in Biomedical Engineering and with the help of Sharmila N, one of the faculty members at Vellore Institute of Technology (VIT), where Charmi was pursuing her education, she started to take her innovation forward. "You could say I found in ma'am, who has a doctorate in rehabilitation, both a kindred spirit and a mentor," explains Charmi about Sharmila, who is now the Advisor for the start-up. After that, Charmi participated in various competitions, including Startup India in Bengaluru where she bagged the first position and Rs 50,000 as cash prize. After increasing her team to include Rahul Tripathy as COO and Soumyajyoti Mukherjee as CTO, she began her quest to refine the solutions.

Punar Healthcare was incubated at VIT in 2019 where they have their own office. They even received initial funding of Rs 5 lakh from VIT and another Rs 10 lakh grant from NIDHI-PRAYAS, an initiative by the Department of Science and Technology, Government of India. Thus, the entrepreneurs went on to make data-driven, robotic, assistive and innovative rehabilitation solutions. "Initially, I used to use wooden boards for our prototypes. Then I shifted to working on proper prototypes at VIT's Creation Labs," explains Charmi. 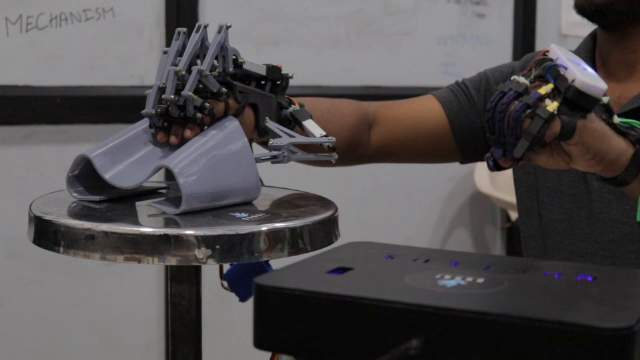 Meet the devices
The first device that Charmi, who was born in Veraval, a city in Gujarat, introduces us to is Nucleus. After wearing the device, which is just like a glove, on both hands and clenching and unclenching the fist of the unaffected hand, the motion is automatically replicated by the affected hand. "During our research, when we visited many hospitals, we met doctors who performed various stretching exercises on their patients and the latter had to keep various parameters in mind including the degree of stretch and the intensity. With our device, the doctor need not perform the action on the patient. The patient can just wear the device and do it correctly," explains Charmi. All the doctors have to do is monitor them, making patients feel less dependent, less embarrassed and more motivated. Plus, these devices are IoT-enabled, and hence, they deliver all the reports to doctors. "Even for home visits, the doctor just needs to carry this device and monitor the patient. This way, the doctor's energy is also conserved," explains the CEO. While the Nucleus is especially for fingers and wrist, their other devices take it up a notch. Q-Trainer is their device in the making which will potentially assist during active, passive and active-assisted exercises. "Since all our devices are IoT-enabled, the doctor is able to supervise all movements even remotely and suggests the patient to increase or decrease their frequency," asserts Charmi. Because of this, the number of house visits can also be reduced for the doctor. "Just imagine, a patient with a minor stroke requires eight months of physiotherapy. These devices can help both the doctors and patients to a great extent," she says and concludes.

For more on them, check out punar.in