The Institute of Electrical and Electronics Engineers or IEEE’s Kochi chapter has been lending a hand through the series of monumental struggles that the state has been facing. Noted for their technological contributions during the Kerala floods of 2018 and 2019, this year, they have decided to use their platform to support the Chief Minister’s Distress Relief Fund (CMDRF) to fight the threat of COVID-19.

IEEE’s Kerala Young Professionals in association with UST Global conducted their first virtual summit towards this end, on May 2. Titled Emerge 2020, the discussion featured key players from major sectors engaging in a discussion on the subject of ‘Rising from Uncertainties’. Held between 3:15 to 9 pm, the event was streamed on the website www.emerge-2020.com with over 818 people participating.

Sahil Sameer, a Founding Volunteer of the organisation says, “Emerge 2020 was a first step in our attempt to come together virtually. It was open to audiences worldwide and required prior registration at a fee of Rs 150 per delegate. The response was immense! People from over 20 countries and 283 organisations participated.” 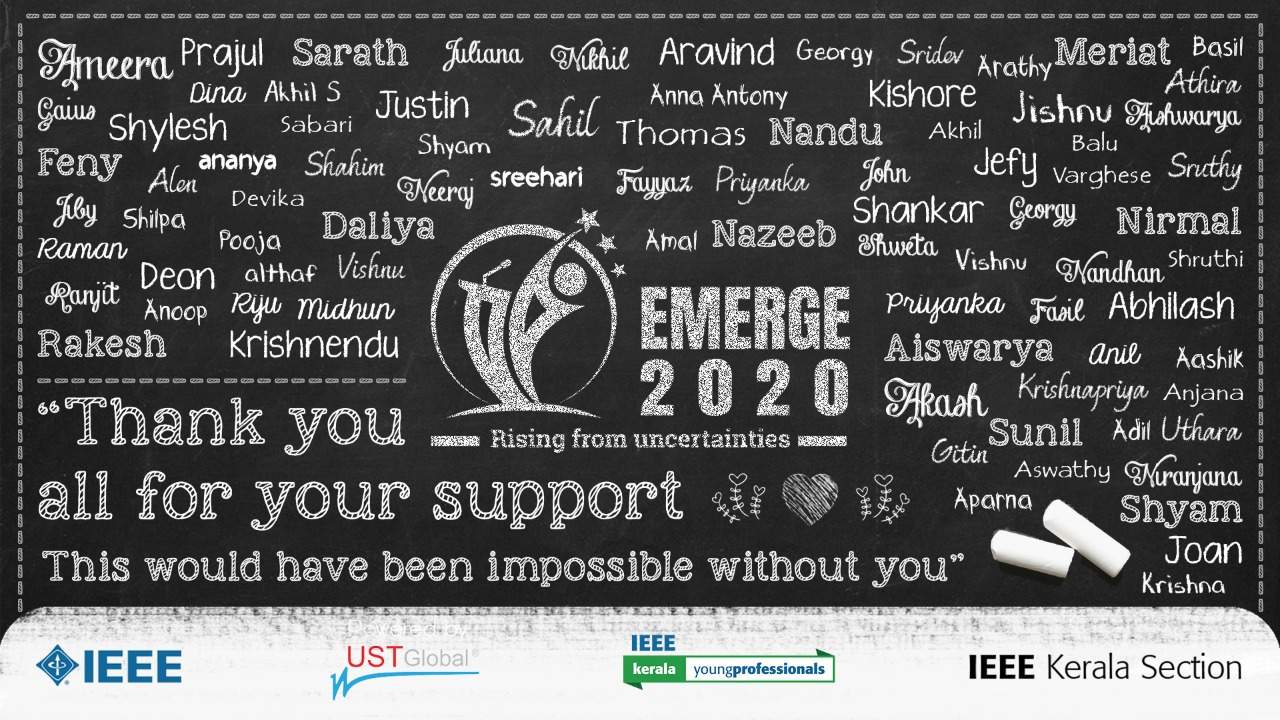 After they set out at 3.15 pm with a keynote address by IEEE Kerala’s Chairperson Sarada Jayakrishnan, Sharique Samsudheen, CEO of Fundfolio, spoke to the audience on ‘Why the economic crash of 2020 is the best time to start your journey towards financial freedom’. This was followed by Priya Kumar, Founder of Piah Dance Academy and an engineering graduate who shared tips on health and wellness during the pandemic.

A little bit of entertainment was added to the mix thanks to Nikhil Prasad, Founder of Karikku Media, one of the state’s most popular social media channels where he spoke about how creating content could be the future. He was followed by Harish Sivaramakrishnan, lead singer of the band Agam, who weighed in with his five cents on keeping career and passion tightly wound together.

Prasanth Nair IAS, Managing Director of Kerala Shipping and Inland Navigation Corporation, also joined in with a session on managing stress during work. Emerge was concluded with a session delivered by Vinod Narayan, a coach and renowned YouTuber who spoke about the idea of career growth in the post COVID-19 world.

In total, Emerge was able to collect an amount of INR 1,22,700 towards the CMDRF. And the amount has already been handed over before the time of writing. Sahil says, “The programme focused on individuals who want to make use of market opportunities at a time like this. If those who participated are able to deciphering the insights given, it can make a real difference to their lives. The sessions were all aimed at decluttering people’s thoughts and realigning their realities to not only survive this time but to emerge stronger.”

As though this isn’t enough to prove the strength of virtual platforms in these testing times, Chief Minister Pinarayi Vijayan gave special mention to the initiative and its contribution during his daily evening press conference. Sahil expresses that IEEE hopes to convene a series of such summits to support the people of the state emotionally and intellectually.