Since the Corona helmet went viral, it was also used by Bengaluru police and Gowtham has been getting numerous calls, he tells us

Almost immediately after the first lockdown was imposed on March 24, several photos of police officers wearing a crown-like, red and black-coloured helmet shaped like the Coronavirus went viral. The first few pictures were said to have come from areas in Chennai, following which Bengaluru cops began wearing similar helmets and subsequently it spread across the country. The helmet was being used to enforce the lockdown and create awareness among the public about COVID-19. The artist, B Gowtham, hailing from Chennai, has become a local celebrity since then, finding it difficult to make time in between interview calls.

Gowtham had visited the Villivakkam Police Station on the first day of the lockdown to ask for permission as he was involved in some social work providing masks, sanitisers and food to the homeless in their area. "I travel by bike and after the lockdown was imposed I went to seek permission to travel in my area for the work I was doing. Meanwhile, I saw how hard the policemen were working to get people to not step out of their houses for silly reasons. I asked one of the officers named Rajesh Babu if I could be of any help," says Gowtham. Gowtham initially created a coronavirus-themed placard with plywood, waste cardboard at his home studio and gave it to Rajesh Babu. The banner had the Coronavirus on it saying "if you come out, I will come in". It wasn't quite effective so the artist decided to take a step further and designed the helmet. "I told Rajesh Babu that I could make a helmet but they didn't visualise what it would be, they asked me to go ahead and create it anyway. I had an old broken helmet. Because, as an artist, I believe in sustainability, I don't easily throw away old and discarded things," adds Gowtham. 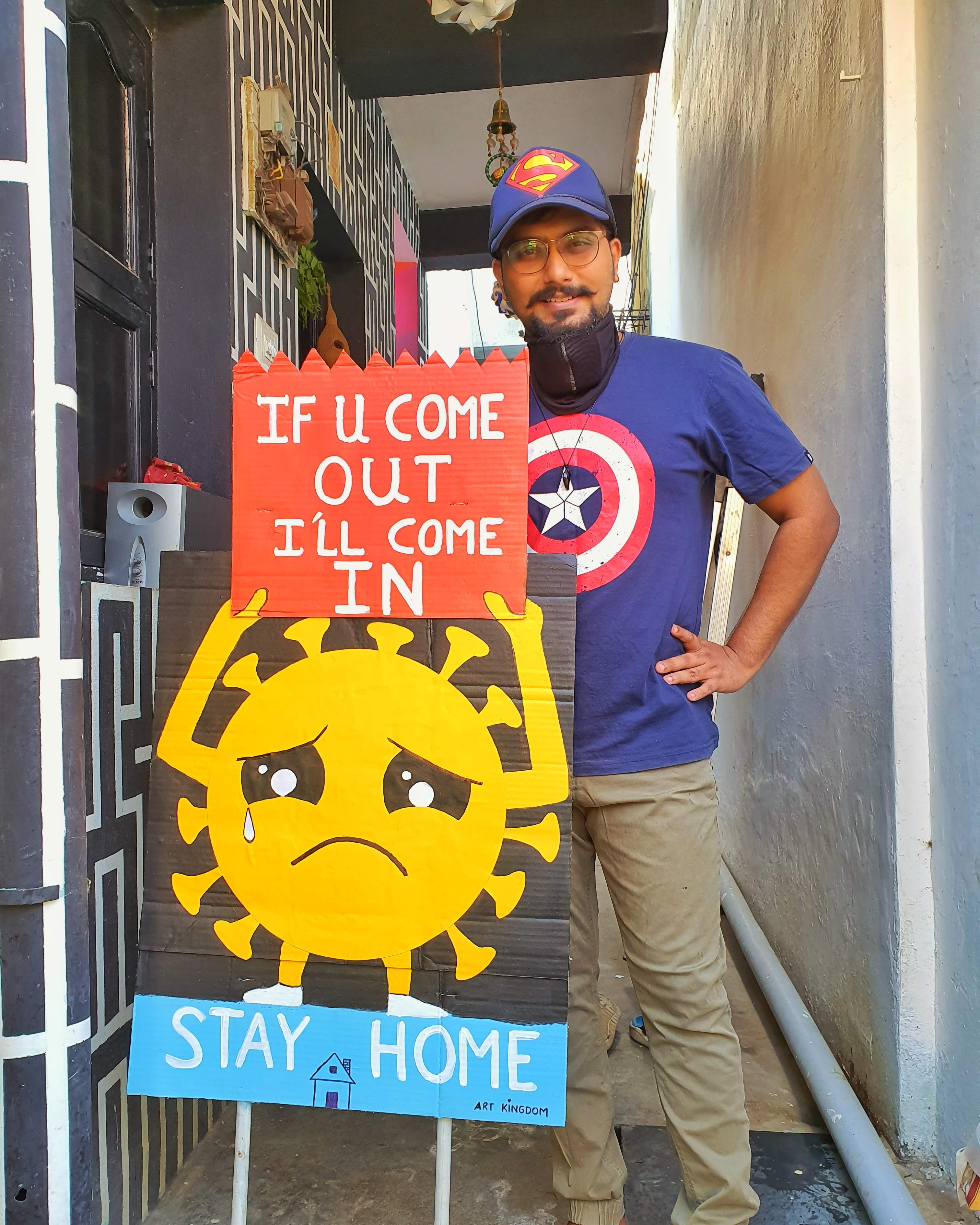 The helmet was modified into the shape of a Coronavirus with the help of discarded plastic and waste newspaper. "Recycle units were shut down so I had a lot of discarded material. I used those to create the helmet and painted it with acrylic colours. I didn't at all expect it to go viral," says the 27-year-old artist.

Along with the helmet, Gowtham also created what he calls a Corona warrior package that includes a mace and a shield. "The mace is to maintain one-metre distance and the shield is to protect oneself. The mace is made out of a waste volleyball, the handle is a wooden reaper found at the police station and the shield is made of plywood and cardboard boxes," explains Gowtham.

Since the Corona helmet went viral, it was also used by Bengaluru police and Gowtham has been getting, numerous calls he says. Speaking about how his local police station appreciated him, he adds, "The locals and the police are happy in the Villivakkam zone. The aim was to create awareness and the response has been quite overwhelming." 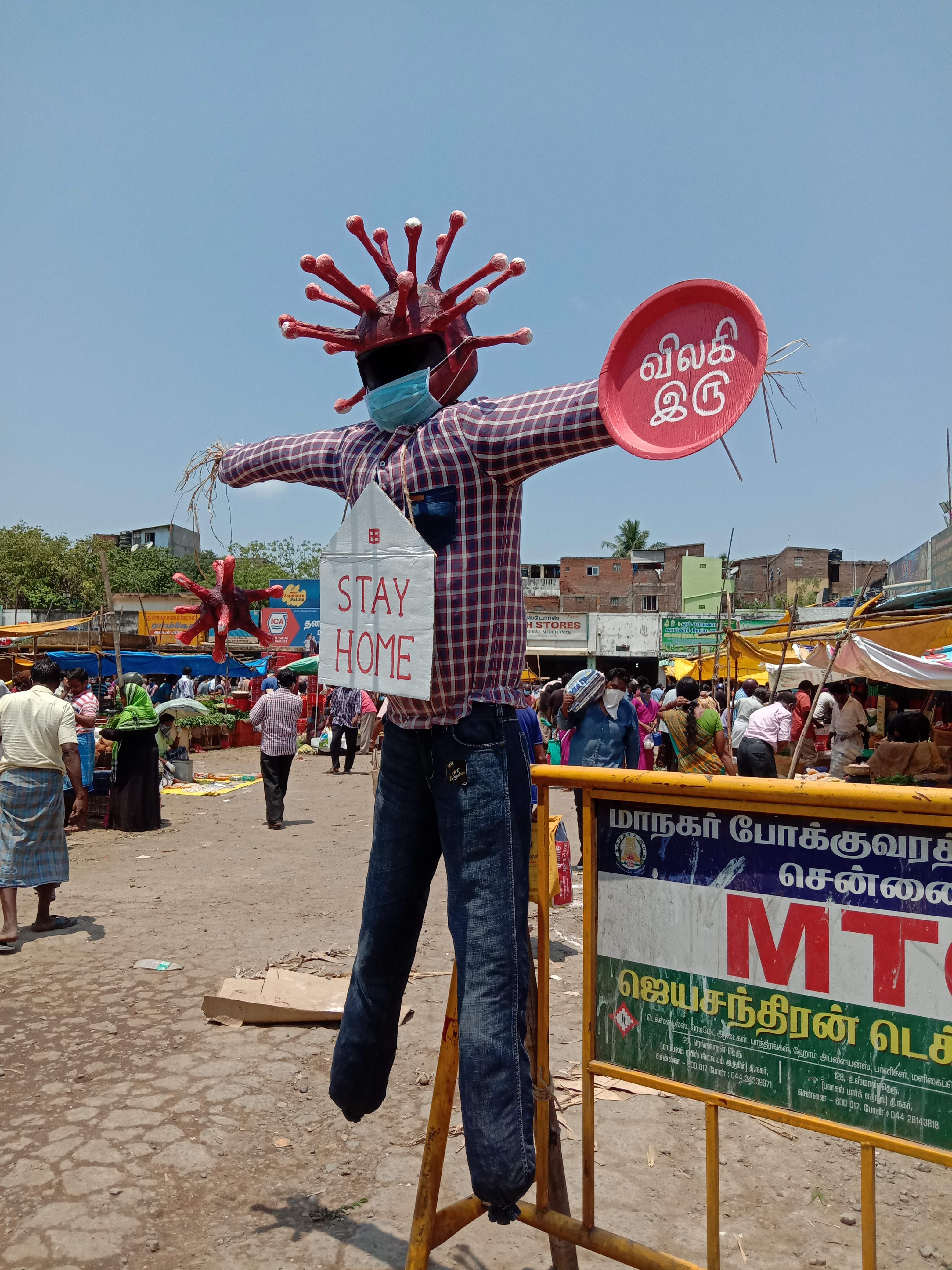 If you would have noticed while crossing signals in Chennai, there are certain figures attached to them which look like a scarecrow but the head would resemble the Coronavirus. Gowtham has also created those. "Across Chennai, they are placed at the signals in the city. Around 20 of them, I had designed and they are being used. The work was done after I spoke with the traffic deputy commissioner," the artist tells us. One of Gowtham's other creations also includes the Corona auto, which was made with more than 160 discarded plastic bottles. "The Corporation provided me with an old auto to create awareness. The auto goes around the city and tells people about the virus. It was done in three colours red, green, blue and mixed medium paints," he explains.

Gowtham, who is a trained mechanical engineer, had decided to work in commercial arts. He mainly does art installations and wall art. He is also working on another creative related to the Coronavirus, which he did not reveal. If you visit his Instagram page 'Artkingdom', you will also notice that he has also been using his artistic skills to raise awareness about threats to the environment. "I mainly focus on social artwork to bring out the need of the hour, bring hope and create awareness. The helmet, scarecrow all of It made people understand more about the virus. Art made the police force choose paintbrushes instead of lathis," he says. 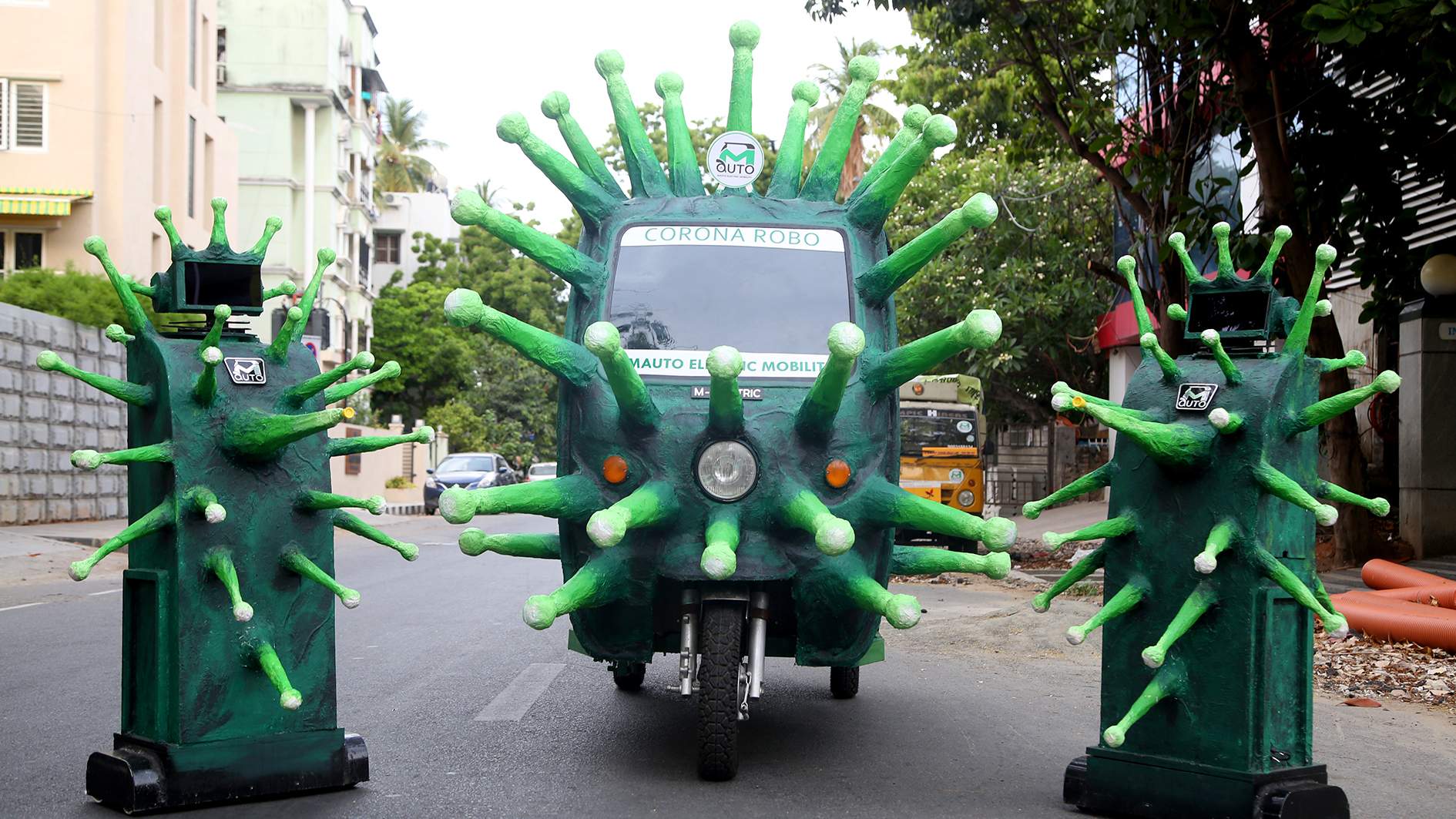 The artist strongly believes that "the future is about creativity and artists have the superpower of creating something meaningful."