With Herbeu, customise your cuppa tea and get it served hands-free, COVID-free. Here's how

Here's how Herbeu can brew your favourite cup of tea, just the way you like it. But what is Herbeu? It is a device developed by KIIT-TBI incubated start-up Udiyate Technologies. Here's all about it

Post the pandemic, will we still be able to step out to savour a piping hot cup of tea without worrying about how many people have touched the cup and saucer? With Herbeu, it might just be possible. A no-contact, lean, mean, tea brewing machine, Herbeu is a product of Udiyate Technologies, a company set up in December 2014. Imagine a one square metre device which might not look like much on the outside, but inside, six kettles are hard at work brewing customised teas. That's right. If you have the app, you can select which ingredients you would like to add, for how long you would like it to steep and so on, to create that perfect cuppa. "That's why our tagline is, 'Wherever you go, our taste follows'," says Chinmayananda Padhy, co-founder and CEO of Udiyate, who says that the kettles clean themselves too.

Rashmi Rani Panda is the other co-founder of Udiyate. The duo filed a patent for Herbeu in 2016

Udiyate and Chinmayananda have come a long way in the past six years. Focused on solving problems arising in the food and beverage industry and other generic problems, they do so by using Robotics, IoT, ML and mobile technologies. A `10 lakh seed funding from IIT Bombay, supported by MSME Odisha, offering IIT Bombay and KIIT-TBI (KIIT's incubation centre) a two per cent stake in the company, sweating it out at Central Tool Room and Training Centre (CTTC) in Bhubaneswar — Udiyate has seen a lot of ups and downs, but with Herbeu, they feel they have arrived. The device in all it's glory | (Pic: Udiyate Technologies)

With Herbeu, there is no human contact required to make the teas, this is their commitment to taste standardisation. "Think of what a cartridge is to a printer. Similarly, we personally load all the ingredients — we have about 16 of them including cardamom, turmeric and the usual suspects — into the machine," says the 46-year-old. The pricing is also dynamic, so if you wish to brew your tea for seven minutes, it might cost a little more than tea brewed for three minutes. But the price never goes beyond `70 or under `7. In this way, the device is equipped to send out 700 to 1,000 orders per day. Sounds superb, right? All this is the result of three years of hard work.

Harish Mohanty is also part of their team. They have been supported by Bhagabati Prasad Pattnaik (CIIE-CTTC) and Startup Odisha too

"Coming up with a hardware start-up is difficult in the first place, but we have had a lot of help," says Chinmayananda who was slated to pursue his PhD from Utkal University, but dropped out. Plugin, an incubation programme by Intel India, Department of Science and Technology (DST), Government of India and IIT Bombay have been two of their many supporters. They were selected for this programme in 2016 and were one of the 14 start-ups that applied. 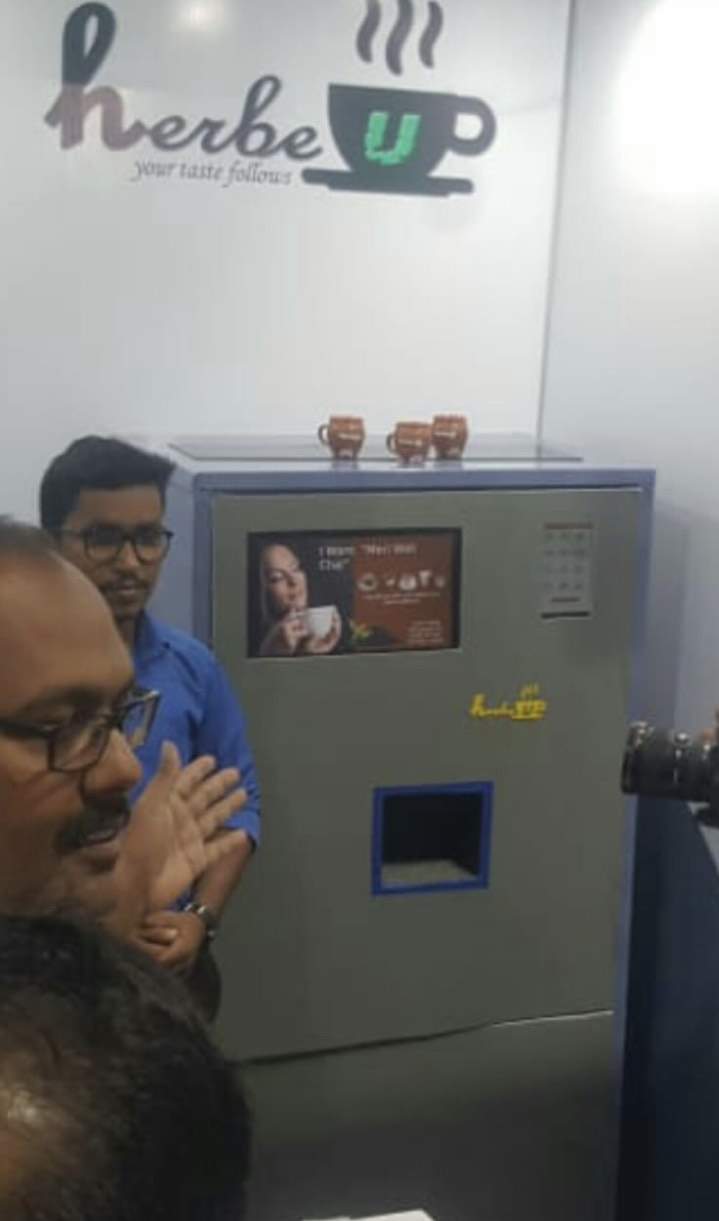 Now that the device is ready, they want to dedicate their time to ensuring that restaurants, tea stalls and vendors are made aware of the power of Herbeu, especially in a post-COVID world.

For COVID:
- They developed a dual Ambu bag ventilator which is more efficient and cost-effective than other ventilators
- They developed an IoT-based santisier. You can chose the number of drops you wish it to dispense, anything between two to eight drops

For more on them, check out udiyate.com