From being a group of SRM students, how NGO Thuvakkam is now taking Politics and Eco Policy to Govt school kids

Started as a student initiative, Tamil Nadu-based NGO Thuvakkam is now creating impactful citizens out of school children with their classes and intuitive programmes

People often complain about how polluted the air is or about the pitiable state of the environment and very often, the complaint that takes the cake is: Why isn't anybody doing anything about any of this? In 2014, a group of students studying at SRM Institute of Science and Technology, Kattankulathur, decided that they had complained enough about the aforementioned things and that it was time to finally take action. “One day, my friends and I were discussing the problems that plagued society and we were blaming it on negligence and apathy of the establishment. But just a few minutes into the discussion, we realised that the society comprised of each and every one of us and that we too were responsible for the sad state of affairs, and that the blame fell on us automatically too,” says 25-year-old Krishna Kumar Suresh, adding, “We decided that it was time to 'wake up' finally and do something. This sowed the seeds of Thuvakkam (which translates to Beginning in Tamil), an NGO that I founded along with my friends.”

Thuvakkam began as a pet project, with the group taking on a tree-planting drive in their very own college campus as the very first step towards bringing about a change. “We involved the Chancellor of the university and other students as well. We were able to plant hundreds of saplings and the activity was a resounding success. This gave us the confidence to take up other projects,” Krishna Kumar explains. And within a few days, they 'adopted' the Tirusulam Railway Station, one of the railway stations on the Chennai Beach–Chengalpattu section of the Chennai Suburban Railway Network, with support from Southern Railway and conducted a mass painting activity — where the dull, grey and dilapidated walls and other areas of the station were given a colourful makeover. “For this activity, we were able to get volunteers from outside and the railway officials also got involved, which we consider an achievement in itself,” he says. 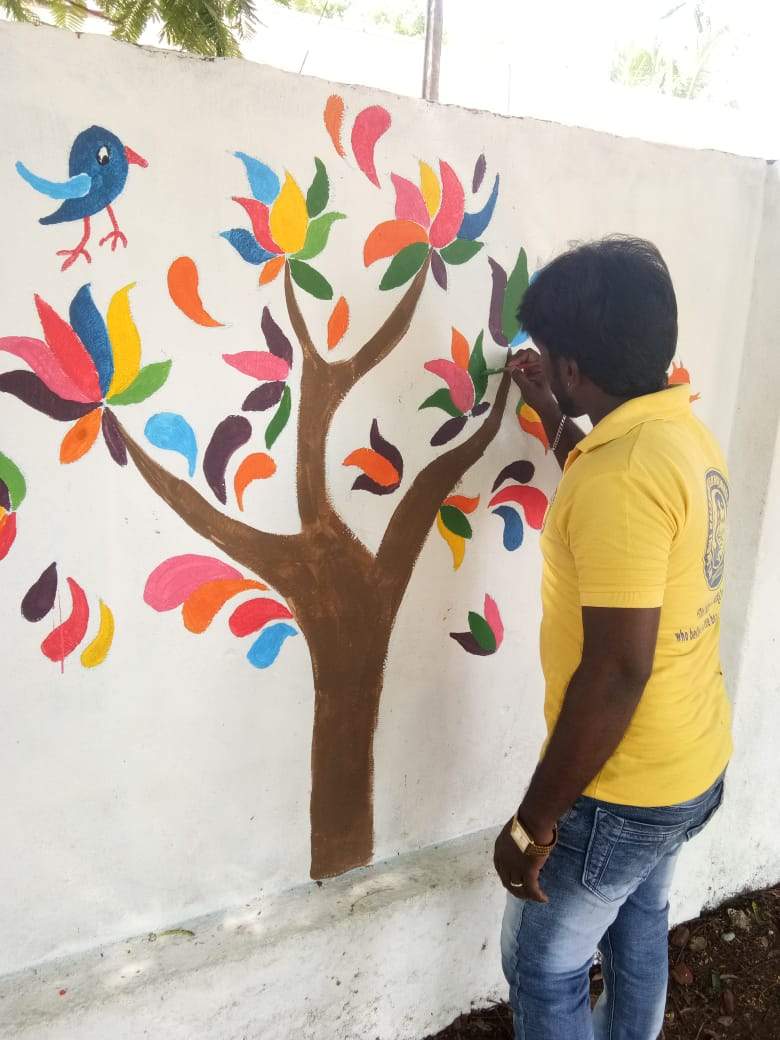 Slowly but steadily, tree-planting drives and clean-up drives and visits to orphanages (where they would distribute essential items for the children) became a regular part of Thuvakkam's agenda. In 2015, Krishna Kumar and his team gave a twist to the clean-up programme by deciding to clean, paint and renovate public spaces such as government schools, public libraries, government hospitals, etc (which were in dire need of a makeover) at night. The new initiative was hence called Clean-up After Dark or CAD. “There were two reasons behind coming up with CAD. Firstly, we did not want naysayers to think that we were doing all this for publicity or fame - doing it at night would not attract attention in any way. Secondly, we also believed that when people visit a completely clean and lovely place that was previously dirty and unkempt, they would feel motivated to keep it that way,” explains Krishna Kumar, who, after completing his Bachelor's degree in Computer Science from SRM University went on to pursue a Master's degree in Social Work from the Madras School of Social Work. Thuvakkam was still a fledgeling organisation at that point, and so, he decided to focus all his efforts into this organisation as he believed it was his life's calling to bring about a change and create an impact, however small it was.

Krishna Kumar and other founding members also strongly believed that education and environment conservation always go hand-in-hand and that real education does not revolve around mindless, rote learning of topics. it is keeping these ideas in mind that they formulated the Karka Kasadara programme in 2016. “As part of Karka Kasadara, our volunteers teach children of government schools and low-income corporation schools at a scheduled time in the week. We teach them subjects like basic computer skills, Arasiyal Pazhagu - a basic understanding of politics in the country; from the role of PM to the local councillor, Ariviyal Aayiram - Science through experiments and Nan Yaar - an understanding of their own selves and potential by following a well-rounded syllabus that is completely framed by us. During these classes, students are free to ask questions and clarify their doubts. We want children to understand the practical aspects of what they are learning so that they can apply the same in their lives,” he asserts. Mime as part of their Modern Thandora programme

In addition to classes, the children are also schooled on how to create and maintain a kitchen garden. “The Mid-day Meal Scheme is one of the incentives for children to come to school daily. So in helping them have their own kitchen garden and growing vegetables like tomatoes, brinjal and spinach that are used in making these meals, we are essentially teaching them how to grow their own food,” Krishna Kumar says. Thuvakkam has carried out the Karka Kasadara programme in more than 20 schools in three areas of Tamil Nadu — Chennai, Tiruvallur and Kancheepuram —  till date.

Putting the spotlight on social issues, Thuvakkam also conducts street plays and mimes on relevant social issues via their Modern Thandora initiative. “We decided to use the same format as the old street plays and use them to our advantage. The team is always on the lookout for young talent who can effectively relay our message to the public, help in raising awareness about these issues and also involve them in making a change. For example, Thuvakkam had teamed up with the Income Tax Commission to create awareness on the harmful effects of bribery as a part of the Income Tax Awareness Week recently,” says Krishna Kumar.

Getting kids to go green

Today, Thuvakkam has evolved into an organisation that boasts of 16 permanent members who work full-time and more than 2,000 floating volunteers who assist the permanent members on an activity-to-activity basis. From coming up with a newsletter, Kural, that is designed, developed and marketed by members and seeks 'to understand the pulse of the nation' to conducting awareness programmes on rainwater harvesting and initiating an 'urban reforestation'  programme, the NGO has certainly come a long way. “The urban reforestation programme or Miyawaki programme is our latest offering that we introduced in 2018. Urbanisation is one of the reasons why we are losing green cover and we want to solve this problem. Miyawaki is a technique pioneered by Japanese botanist Akira Miyawaki, that helps build dense, native forests. The approach is supposed to ensure that plant growth is 10 times faster and the resulting plantation is 30 times denser than usual. We have created 12 urban forests in places like Chennai, Tiruvallur, Kancheepuram and Thoothukudi,” Krishna Kumar adds.

When asked if he thinks that the present generation is more concerned about their environment, he answered “Of course! We are facing a lot of issues right now – from climate change to water crisis – it is all visible now. More than earning money and spending on things, I feel youngsters also worry about their future generations – whether they will have any resources left at all! It is definitely not right to say that we are a materialistic society that does not care. In a day, nearly 30-40 activities conducted by many organisations like ours, are happening in Chennai itself. Isn't this proof that we want to change things?” asks Krishna Kumar.