Dream Run: How this Kerala NGO is putting art by diff-abled kids on the big stage

At one of Kozhikode's most thriving NGOs, everything began with a dream. Working with differently-abled children, they never dreamt that they could sell some of their kids' works of art. And yet, that's exactly what they managed to achieve when they set up the Swapnachitra programme. Sukhadev, Chairman and one of the founding members of Kozhikode-based NGO Dream of Us says, "There is a world outside of education and all children deserve to experience that. We, unfortunately, put our students within categories. This state-level programme was set up to shower these children with attention for the right reasons." Its first edition was held in 2018 at the Lalit Kala Akademi in Kozhikode. This featured 21 young artists who displayed 50 paintings. And in their very first attempt, 80 per cent of the work was sold.

Dream of Us was set up in 2017 when 8 social workers and academicians decided to collectively work towards a shared vision. Although they had all worked together before, it was the first time that they were able to bring to life an organisation that worked on building the intelligence and abilities of differently-abled children. 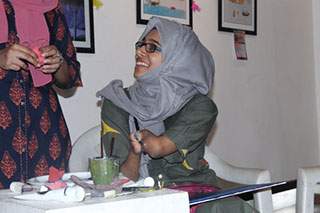 COLOUR IN: The programme supports students in promoting their work

"We work with schools and their students to help these students adapt to the classroom environment and teach educators how to deal with the students without alienating them," explains Sukhadev KS, adding, Explaining how they got started, he says, "I was a teacher myself. I used to deal with students who came from a variety of places and backgrounds. One symptom of our flawed education system that has always touched me was the inferiority with which differently-abled children are treated in our schools."

Once they begin working with a child, the organisation embarks on a long-term relationship with them and their teachers to help support them. The idea is to extend support beyond schooling. "School is actually the easy part!" says Sukhadev, "At least there is a semblance of respect with which teachers deal with differently-abled students, even if it is just to keep their jobs. It gets so much worse when the students leave the safety of school. Companies that provide skill development to the youth always view students through a lens of pity and superiority. No matter how far they get, they are looked down upon." As a solution to this, Dream of Us offers Skill Development and Leadership courses for the students. 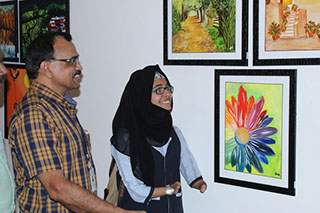 At the art of it all
In their experience, the Dream of Us team has always found that there aren't enough avenues outside of school where differently-abled children can exhibit their talents. In the case of students who display great talent in art, their motivation burns out the minute they step out of their comfort zone. This is when they set up the pathbreaking Swapnachitra (which translated to Dream picture) programme. It collects the work of differently-abled children who have never exhibited their work before and offers them a platform.

The organisation collected, mounted and framed each painting professionally. Brilliant paintings scribbled on chart paper found a place on the Akademi's wall. Word about the endeavour was spread among their circles and on social media. He continues, "As many as 21 of them had never done something of the sort before. And throughout the process they had doubts about whether they could do it because they had never been recognised for their talent for a day in their life. Paintings for which they expected people to pay 50 rupees were sold for Rs 2500. They were in disbelief!" 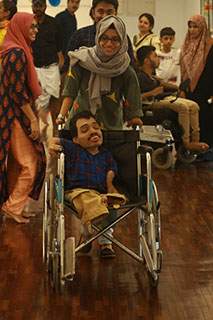 HELP OUT: The volunteers are also students who the organisation works with

Giving back to their juniors
At the organisation's events, their main volunteers are children who have grown with them. In the first edition of Swapnachitra, these were a group of hearing-impaired children. At a time when the Lalit Kala Akademi did not even have a ramp for a wheelchair to be pushed through, these children helped their friends reach the second floor where the event was taking place.

This year, Swapnachitra will take place from March 4-8. And the idea is to go bigger than they ever have before. In the run up to the event, Dream of Us is on the lookout for differently-abled from all corners of the state who have a knack for art. They are in talks with organisations working with such children in each district to nominate students who will fit into the requirements of the exhibition. There is only one rule: The nominated students should be given their first platform ever on Swapnachitra. Currently, they have 950 nominations.

Here's hoping that they reach for the stars.