Getting hold of violin prodigy Gayatri Sivani Vishnubhotla can be quite tough. We would know! We'd been trying to talk to the 14-year-old for over four months now. But now that we've got in touch, we realise exactly why she is so busy. Firstly, she just shifted to Hyderabad from her native town of Vijayawada two months ago. Secondly, not only is she pursuing her first year from Andhra Mahila Sabha Arts and Science College for Women, she also travels to Chennai every 15 days to train under violinist Sangeetha Kalanidhi Dr M Chandrasekaran. Apart from this, she practices on her own for two hours (more during holidays) and performs at events as well. When we ask her how many performances she has given, she replies innocently, "I don't even remember," and laughs. After putting some more thought into it, she confirms the number to be over 500, which is a lot for someone as old as her. 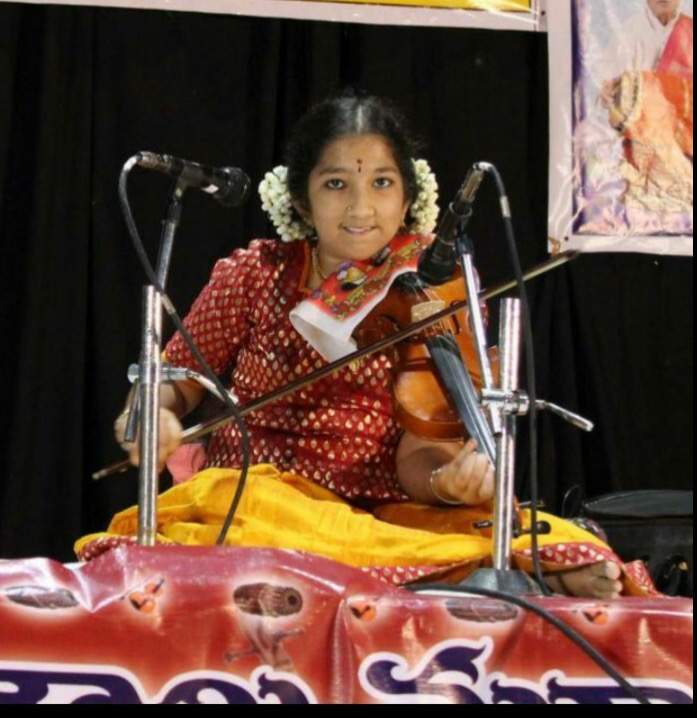 On stage: Sivani during a performance | (Pic: Gayatri Sivani Vishnubhotla)

Sivani's musical journey began right at home, when she started picking up vocals from her mother, who is a musician too, when she was three. Thanks to her father's brother, who is a violinist, she picked up a violin when she was seven. "My first guru, Ganduri Srinivasa Murthy taught me the basics and I learnt it in three months," says the fast learner." Violin is a tough instrument but, by God's grace, I took to it easily. I was genuinely interested in learning to play it and no one forced me into it, which is a major factor," says the musician. For her first performance, she displayed her prowess at Abhyudaya Foundation in Kakinada. "My first performance is the most beautiful memory I have," says Guntur-born Sivani with a smile. Was she scared, we wondered. "Not too much," comes the quick reply.

But Sivani's most memorable performance till date was last year, when as a part of the group who received scholarships from Centre for Cultural Resources and Training, she performed in front of PM Narendra Modi in New Delhi. Sivani continues to learn from G Srinivasa Murthy, who is based out of Vijayawada, over the phone. "It is quite hectic. I am currently at an advanced level," she says. Of course, there was no point in asking what she wants to be when she grows up, but we ask anyway. "I want to continue playing the violin," she says and her answer certainly doesn't disappoint.