It's time that Telangana embraces Cheriyal painting, the 400-year-old art form, more warmly. And especially those who are giving it their all to keep it alive. This is the tale of one such family

As a child growing up in Cheriyal, a village in the Warangal district of Telangana, Dhanalakota Sai Kiran would come back from school, freshen up and sit down to paint with his parents. Unusual? Well, hailing from the Nakashi community — the group that practices this 400-year-old art form till date — children are initiated early on into the tradition of Cheriyal painting. For the uninitiated, here is an aside on what this art form is. Cheriyal paintings are scrolls which were used by storytellers to tell tales of epics like the Ramayana and the Mahabharata. This practice was popular across the two Telugu-speaking states once upon a time, however today, it's safe to say that traditional storytelling is breathing its last. But thankfully, Cheriyal painting, due to the sustained efforts of families like Sai Kiran's, is still alive and kicking. 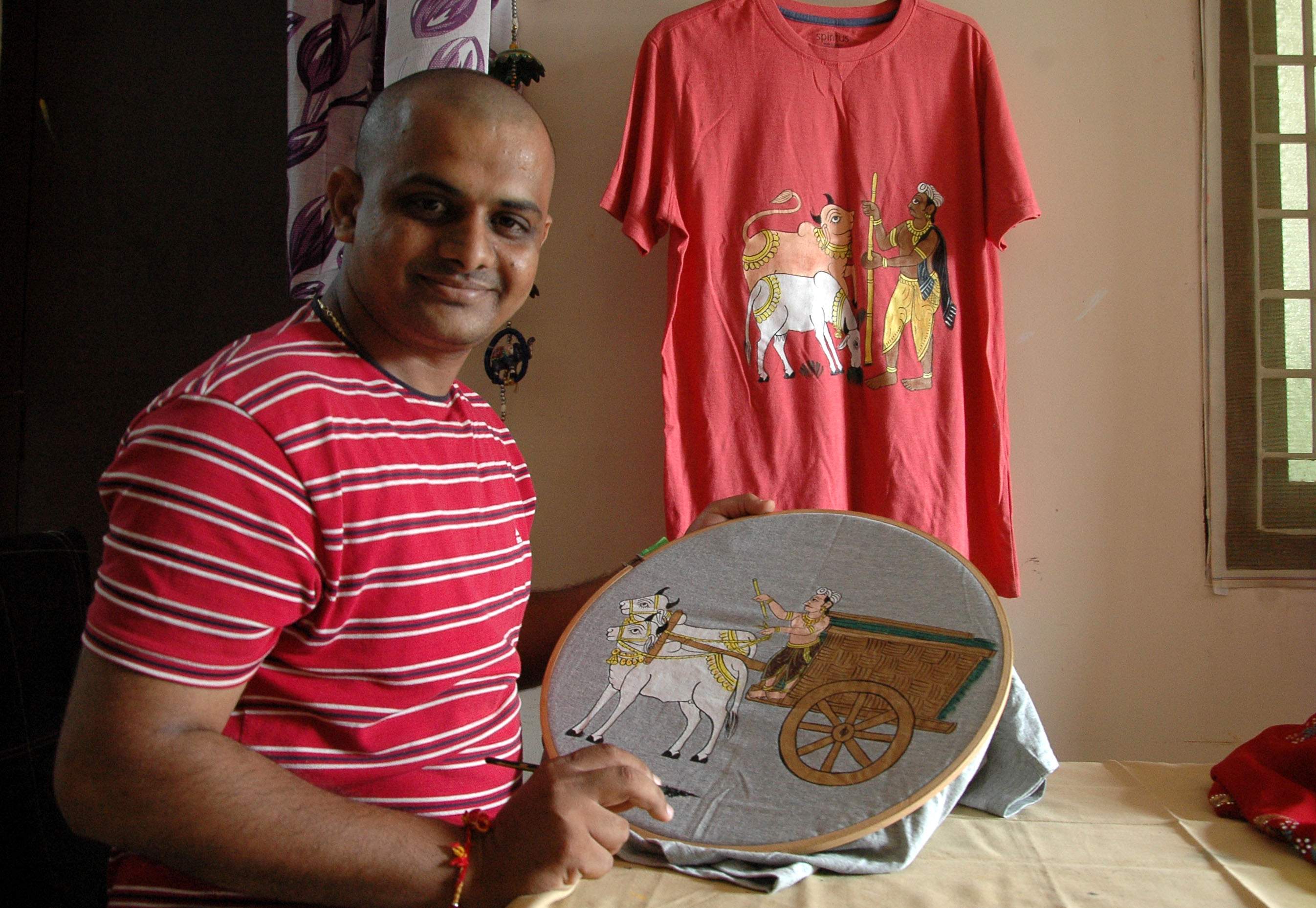 In the making: Sai Kiran working on a T-shirt | (Pic: S Senbagapandiyan)

So, how does one spot a Cheriyal painting? Today, they exist as masks and paintings of varying sizes. It's painted against a vivid red background, always telling a story. The characters are painted sideways and the design ornaments worn by women in the paintings are really like no other. Which is perhaps why there are only four families who are the custodians of this art form today including Sai Kiran's. Hence, the scene hasn't changed much since his school days, except that they have shifted base to Hyderabad now. The family of four, which includes D Nageshwar (50), D Padma (46), Sai Kiran (27) and his younger brother Sravan Kumar (22), continues to carry forward the legacy of Cheriyal painting as a family by painting together each and every day.

Sai Kiran has conducted workshops in New Delhi, Bengaluru, Pune, Goa and so on

Cheriyal in their soul

One cloudy afternoon, as I was ushered into their home in Alwal, Hyderabad by Sai Kiran, I was greeted by D Nageshwar, who had already started on his day's quota of Cheriyalpaintings. The family's work table, where Nageshwar was absorbed in his work, is actually the first thing I see, placed right beside the door, which speaks volumes about the importance art holds in the household. Pleasantries followed and I eventually made myself comfortable in their cosy home which is resplendent with art work — whether it was a Cheriyal wall plate or a pair of Cheriyal masks hanging on the wall. It is amongst this atmosphere that we sat down to talk about the art form which received recognition as a handicraft from the state government of United Andhra Pradesh in 1976. "I was deliberating taking up animation myself but a chance meeting with Vani Devi, the Principal of Sri Venkateswara College of Fine Arts, while taking a workshop at the Salar Jung Museum, changed things," says Sai Kiran. 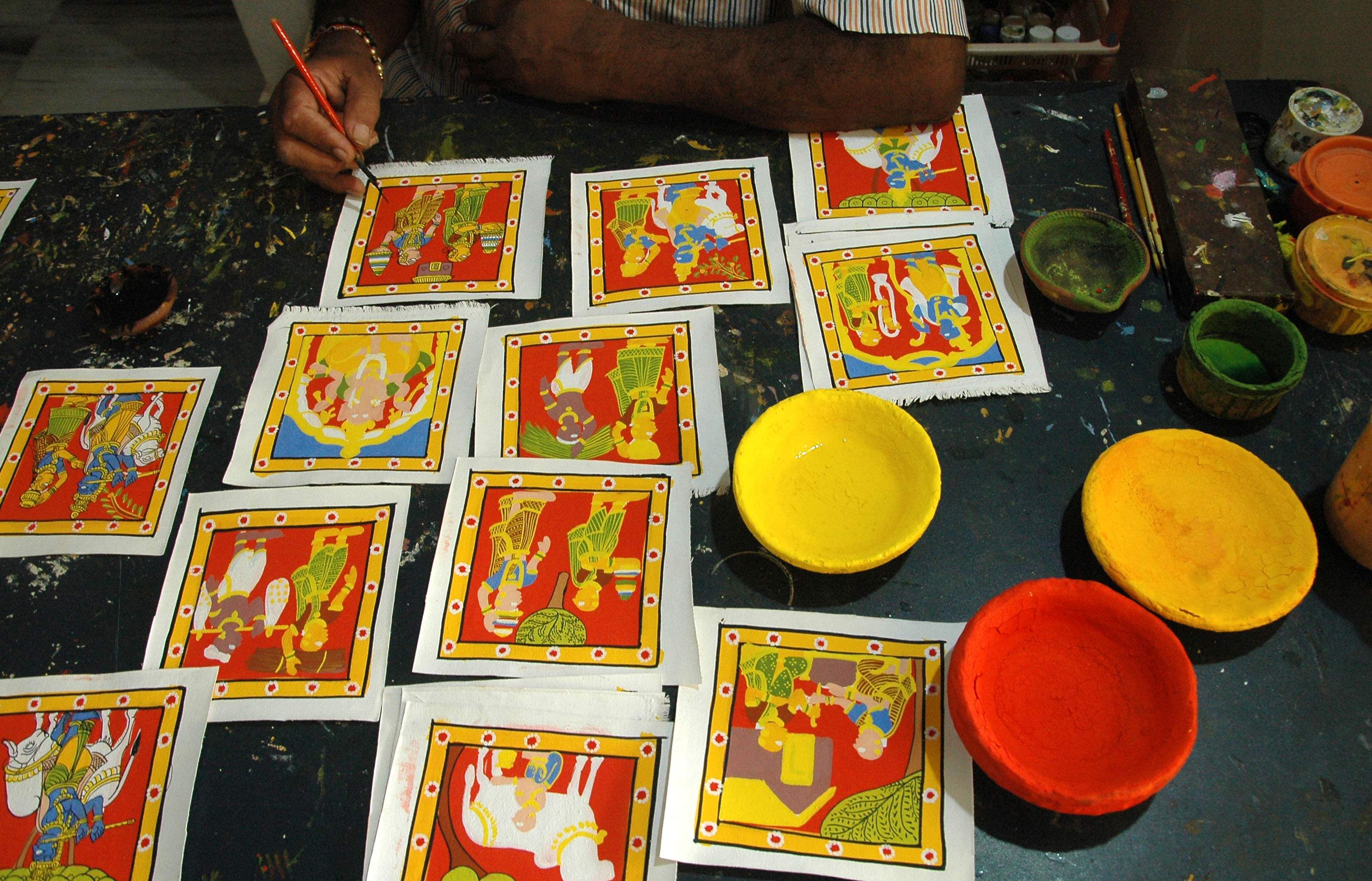 Vani Devi (who is the daughter of late Prime Minister PV Narasimha Rao) generously offered him a free-of-cost seat in the college where the youngster pursued a five-year Bachelor's course in Fine Arts, but he says that the college, and the city at large, taught him a lot more. "Many foreign tourists used to come to Cheriyal but due to language limitations, we could hardly explain the art form to them or anyone else we met during the various exhibitions we participated in. That's when I thought that we, the younger generation, needs to take this art form forward," says the 27-year-old. With communication skills and even a few business skills in order, Sai Kiran started taking workshops to spread the love of the art form alongside his studies and full-fledged after he completed his studies in 2015.

In Hyderabad, he has conducted workshops in Potti Sreeramulu Telugu University, Iconart Gallery, Our Sacred Space and more

"We soon understood that youngsters today won't buy scrolls or paintings, so we started innovating in terms of products," Sai Kiran says and shows us hand-made boxes, spectacle holders, pen stands, tissue paper boxes, key chains, T-shirts and so much more — all painted with motifs associated with Cheriyal art. Another point while gazing (read 'gaping with mouth wide open') at the paintings is that they no longer necessarily depict scenes from folk tales and mythology. We spot a few village and agriculture scenes in their paintings as well. This, we are told, is to ensure that everybody is able to relate to the painting. "We, that is my brother and I, have even started bringing in more detailing into our work," says Sai Kiran. Squinting at both his and his father's work, we can confirm his statement as individual leaves of every tree is more defined and so is the saree and the ornaments worn by most women in the painting. 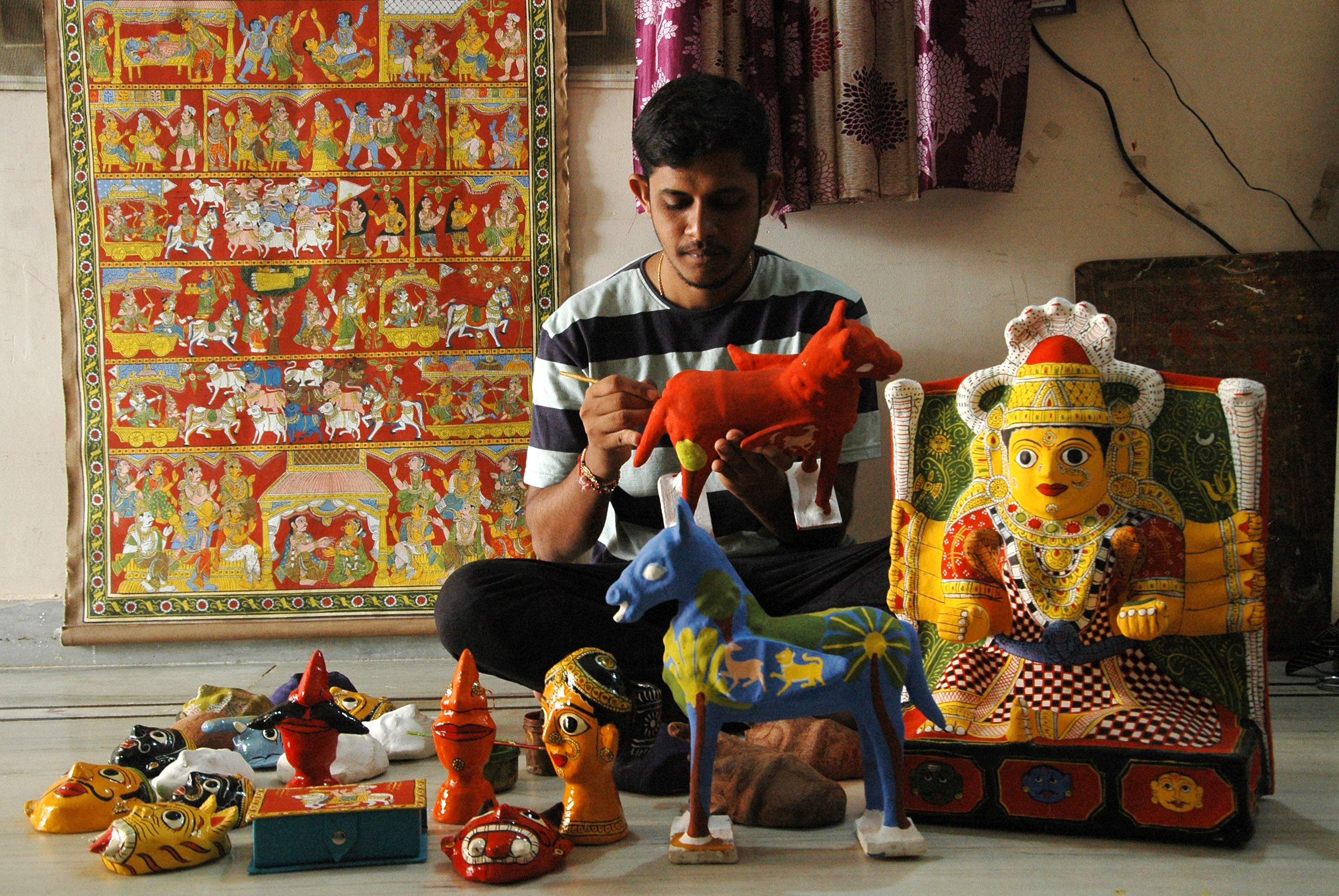 Totally absorbed: Sravan Kumar with the products they made | (Pic: S Senbagapandiyan)

As the four hover around, showing us this artwork and that saree, we notice the silent pride they feel for the art form. And why shouldn't they? D Chandraiah, Sai Kiran's grandfather, won the national award in 1983, Sai Kiran's father D Nageshwar won a state award in 2003, his mother one a state award in 2009 and Sai Kiran himself has received the Konaseema Chitrakala Award twice. Here is a family which clearly sleeps, eats and breaths Cheriyal painting. And if a family that eats together, stays together, one can only imagine what a family that paints together is capable of.

Making of a Cheriyal painting

- Tamarind seed flour is boiled and it turns into a paste. This paste is mixed with chalk powder, starch and tirumani gum and is applied to khadi cloth
- Minimum two coats of this mixture is applied after each one dries
- After the cloth is dried in the sun, an outline is drawn for the painting
- The customary red is filled in the background and then, the elements of the paintings are painted with the necessary colours
- Then, the outline is filled in and the painting is complete 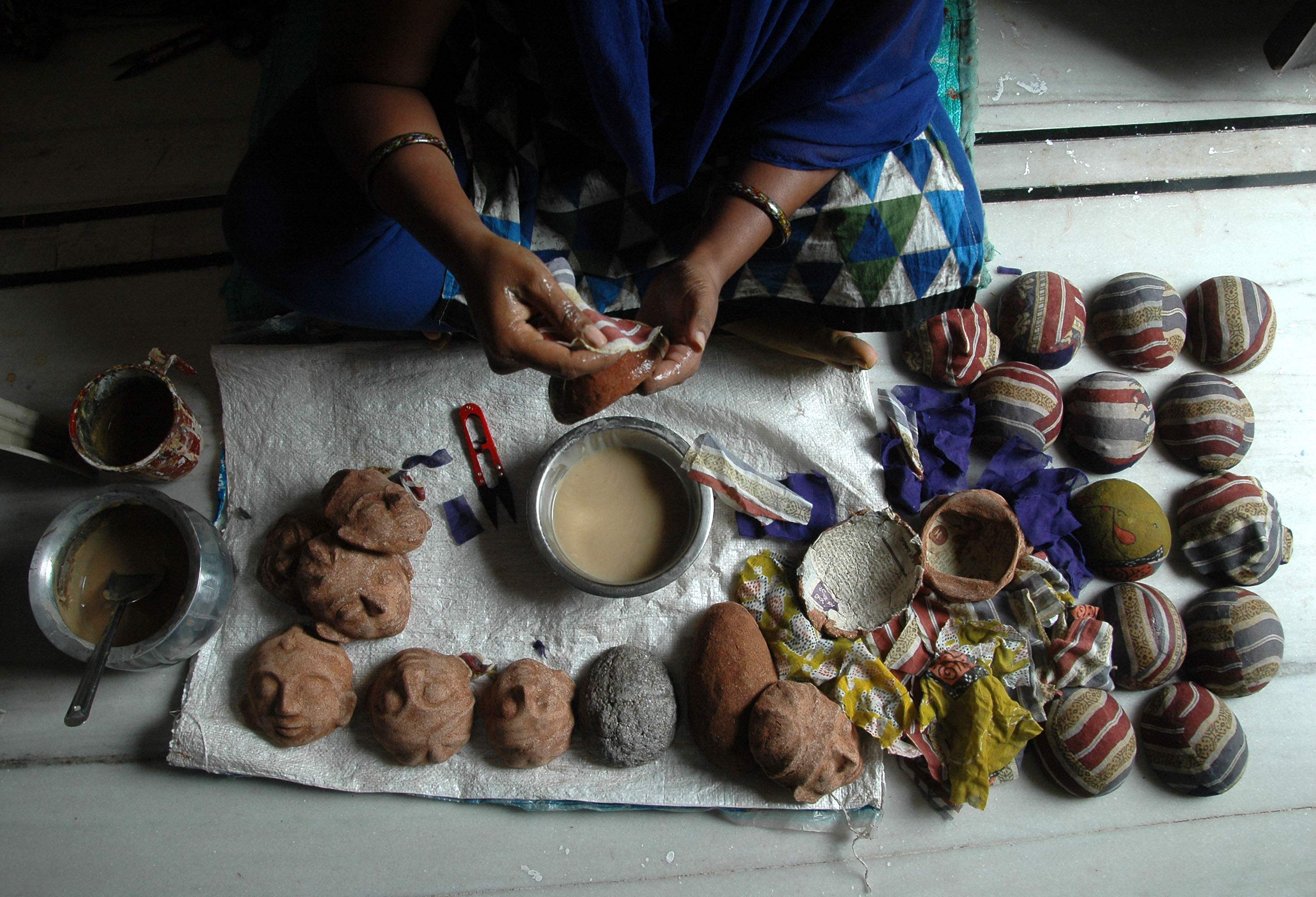 By hand: Making Cheriyal masks is a huge process. Here, strips of cotton cloth are stuck over the figurine to strengthen it | (Pic: S Senbagapandiyan)