Anshul Sinha's movie, 'Mitti — Back to Roots', brings the farmer crisis to the forefront

Acclaimed director Anshul Sinha's movie, Mitti — Back to Roots highlights the plight of farmers and even offers solutions to tackle the problem

Last week, the cause of farmers came to the forefront in Telangana, thanks to the Rythu Bandhu Scheme launched by Chief Minister K Chandrasekhar Rao. And though this welfare scheme supports farmer investment for two crops a year and is one-of-a-kind in the country, it has called for yet another round of discussions around the agrarian crisis. Familiar statistics like 3,18,528 farmers who have committed suicide between 1995 and 2015 as per the National Crime Records Bureau; every 30 minutes, a farmer commits suicide, so on and so forth, have become talking points yet again.

And to reinforce the dire state our farmers are in, director Anshul Sinha highlighted their plight in his movie Mitti — Back to Roots. This story about a young agricultural scientist, who is trying to do her bit for the farming community, was released last year and is now reaching out to more and more cities. Finally, it is going to have its first open screening at the Visakhapatnam Public Library on May 27 and at Lamakaan, Hyderabad on June 16. 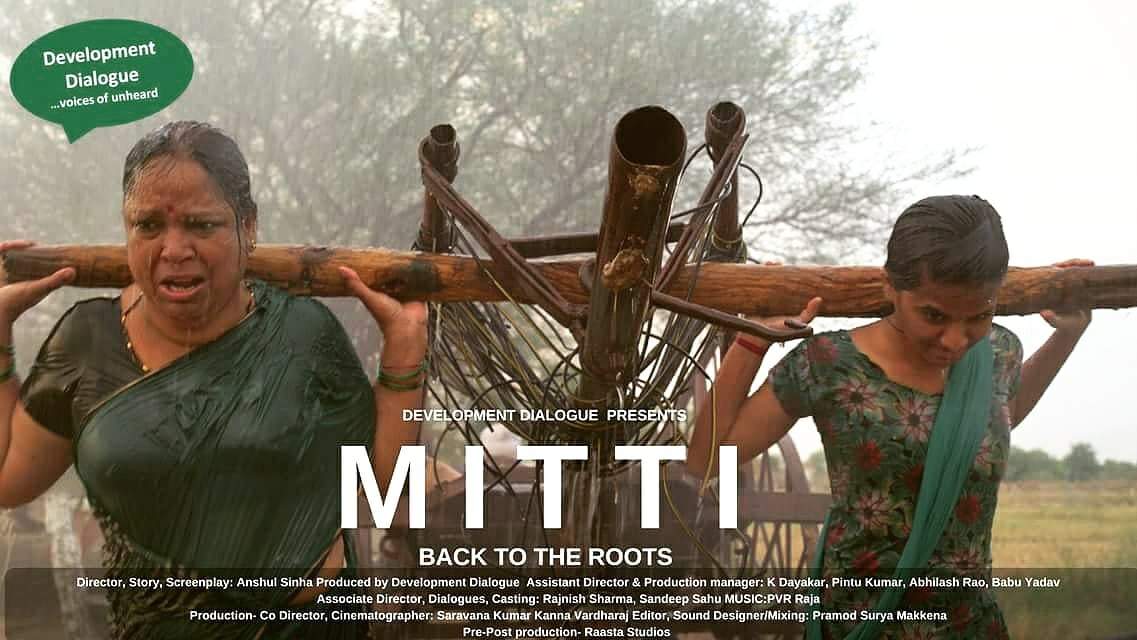 Starting a dialogue: One of the posters of the movie

Twenty-seven-year-old Anshul Sinha believes in truly understanding the themes of the movies he makes before he actually gets to shooting them. Hence, for Mitti — Back to Roots, Sinha practised farming for four months in 2015. And this was just one part of his research, which started in November 2015 and ended in April 2016. It should come as no surprise then that the Hyderabad lad has bagged 102 awards and 22 international nominations since the start of his career.

"We even hand drew all the 1,000 plus frames for the movie because we are trying to make a big statement and we want it to be communicated properly," says Sinha. The movie doesn't stop at highlighting up to 25 issues that plague farmers, including market exploitation, drought and the effects of pesticides, but also provides solutions to these issues. And by doing so, "we wanted the distressed farmer's voice to reach urban areas," establishes Sinha.

Some of the locations where the movie was shot include Enabhavi, Uppal vegetable market, Gowliguda and TKR College

Shot in 35 different locations and often in the sweltering heat of summer, shooting the movie proved to be more challenging than Sinha and his team thought it would be. The biggest challenge was, of course, the budget. They wished for `25 lakh but had to settle for less than half the amount with the help of Farmer Champions and other organisations. And though each of the 133 scenes in this 120-minute-long movie had their own challenges, Sinha recalls two particularly challenging ones. A rain scene, which would usually cost anything between `50,000 to `1 lakh, was shot within `10,000, thanks to an innovative farmer's idea. "He helped us create artificial rain using rain guns," shares Sinha and points out how the movie was truly a collaboration between farmers and the team. They even ended up designing a set at Osmania University for a mere `5,000 when they couldn't find any other location.

The film itself is a controversial one as it raises a voice against industries and because of that there could be a threat to Sinha’s life, but that doesn't deter his commitment to the movie. After the shooting concluded, their next obstacle proved to be even more challenging — finding a distributor. 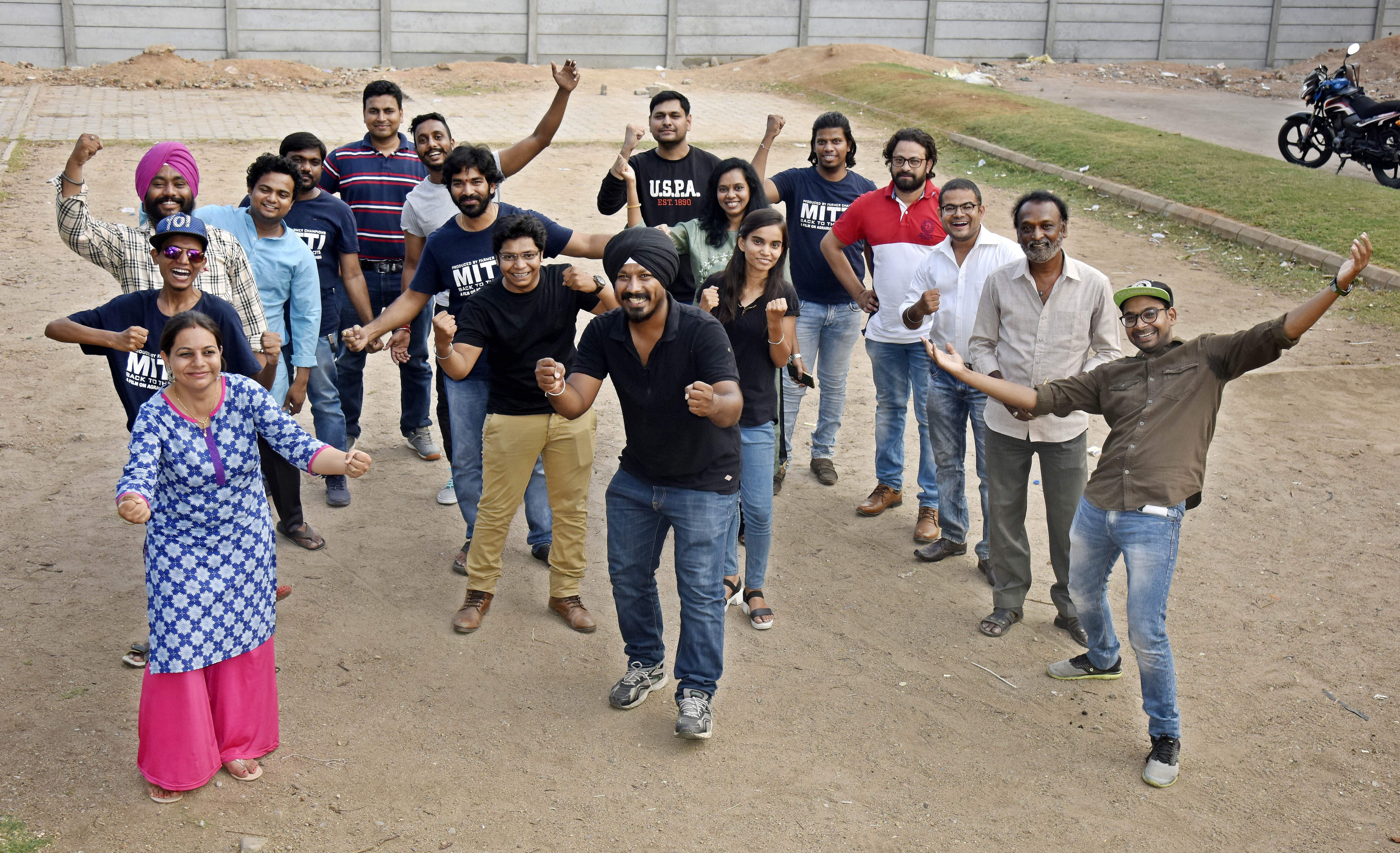 All smiles: The enthusiastic and pumped up the team behind the movie

Sinha and his team approached several distributors, but none were ready to back the film. They were left with no choice but to take the movie to the masses on their own. "We are the only source through which the movie is being screened currently. And as there are hardly any sponsors, we have decided not to depend on anybody," says Sinha. They are doing roadshows in rural areas and screenings in colleges to make sure that the message gets across to both the urban and the rural audience. The film has even found an international audience in cities like Athens, Washington DC and Frankfurt.

They have dubbed the movie in Telugu, the funds for which were raised with the help of I For Farmers, and the Kannada and Tamil versions are expected to release soon. "Now, people are taking the movie forward," says Sinha, who is organising free screenings for rural farmers. In fact, at a recent screening at Markapur in the Prakasam district of Andhra Pradesh, Sinha interacted with a farmer for about two hours and learned that they haven't received rainfall for more than two years. Because of this, farmers were leaving their farming practices and migrating to other jobs. 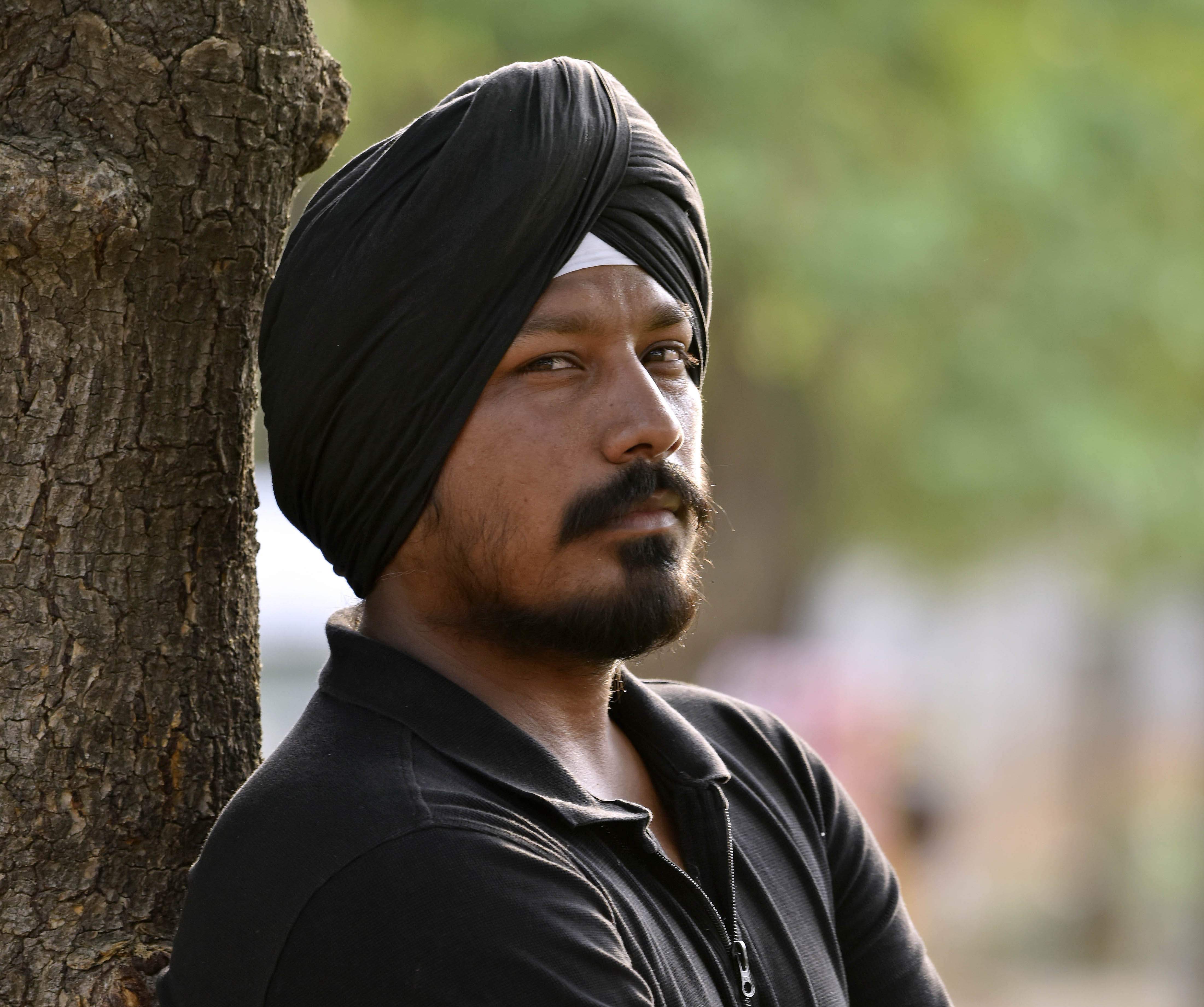 Through his lens: The director of Mitti, Anshul Sinha

It's in our hands

So, for every 30 minutes that a farmer commits suicide, Sinha wants to make an effort every minute to save their lives and spread the message through his film. And this is something that he doesn't expect from the government alone, he wants us to take the responsibility as well. "All these farmers need our help. We can't expect the government to do everything; we must come forward too," concludes Sinha. And indeed, he is setting a fine example of coming forward and taking up the initiative himself through his movie.

To find out more about the film, click on mitti-thefilm.org