The Kochi-Muziris Biennale has become as second nature to Kochi as its monsoon and Chinese fishing nets. The whiff of fresh paint makes its way across Fort Kochi and Mattancherry as graffiti begins to replace the paint on its walls.

One of the country's most awaited art exhibitions is back for 2018 and the city is gearing up for it. The exhibition itself is determined to let its art speak for itself. And this year, it aims to be the loudest when it comes to children.

The event has always been friendly to the youngest of art enthusiasts. In the past editions, workshops and classes for students were regularly conducted in popular Biennale venues like Pepper House. A major branch of the event, the Students’ Biennale ropes in students of Art from different parts of the state and the country. In 2015, there were ten student curators involved.

A regular feature of the Biennale, Art By Children (ABC), is gearing up to be introduced on a larger scale. In the previous years, ABC had gone to different schools to conduct a few art programmes. However, the most important addition for children was the introduction of Art Room in late 2017.

"This is essentially a pilot programme for something we hope to spread across many schools in Ernakulam," says Gautam Das, Assistant Editor of the Biennale and Chief Coordinator of ABC. Introduced for the first time in the Government Girls Higher Secondary School, Mattancherry, Art Room is exactly what it sounds like — a studio-like room is set apart in schools for students to learn and practice art. The classes are held every Friday by artist Vipin Dhanurdharan, during intervals. 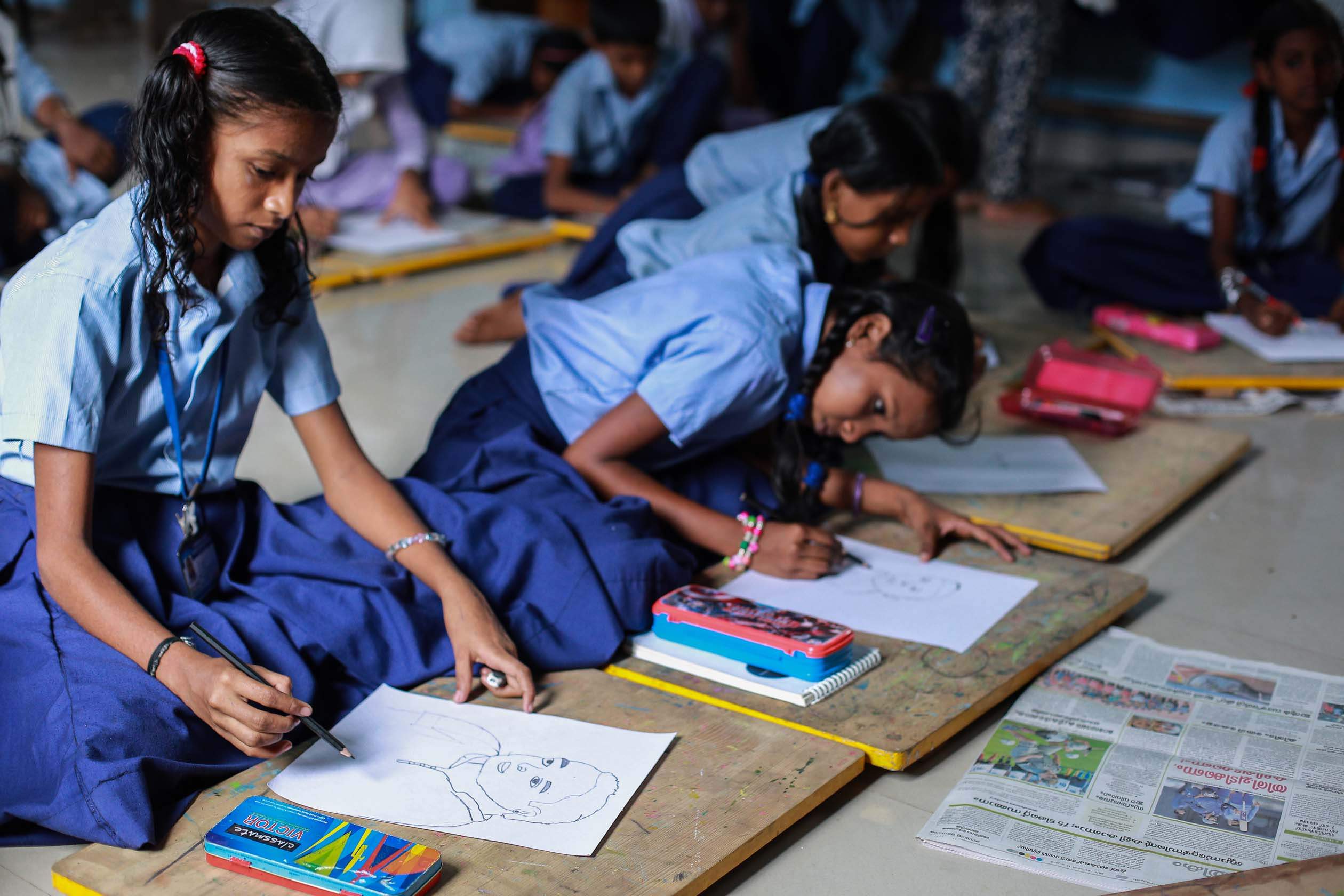 State of the art: The children have responded to the programme very positively

"Most of these students are not actually interested in the art itself; most of them come for the activities and I teach them accordingly," explains Vipin. He goes on, "My area of focus is object studies and I try to teach it to the students. I use something that is simple and close to them, like their slippers, and try to create some art out of that. The idea is to use what they know and help them learn through that." Over 30 to 35 students form a part of this programme. Classes in the evening are open to anyone and may include 20 to 50 students.

Vipin brings in friends, who are artists, to communicate with the students when they are able to. He says, "Last week, we brought in artist Jalaja P S. Since it's about sparking an interest in them, we use anything from videos of the subject that they are painting to other fun methods that they can relate to.” The materials and other objects are provided to the students. The classes focus entirely on allowing the students to think and act for themselves in a way that leads to artistic expression. "My hope is to slowly turn this room into something much bigger," he concludes.

I use whatever method it takes to capture their imagination. Even if a child is not interested, I make sure that they are engaged by using real models of their subjects and showing them videos about them

"Earlier, the problem was that the programmes were held strictly alongside the Biennale itself. As this is seasonal, the interest fizzles out within the first few days," points out Gautam Das, adding, "In 2015, we decided to conduct these programmes in different schools. Last year, we conducted 100 workshops across Kerala.

But we noticed that this method of teaching creativity was not particularly beneficial to anyone." After a few months of analysing their methods and conducting various meetings, the team has decided to focus their programmes within the Ernakulam district in an attempt to bring a sense of focus to what was being taught instead of dispersing it without an order.

After careful deliberation, they have hand-picked 60 to 70 schools and plan to begin working with them based on Vipin's successful experience with Art Room. They have partnered with teachers from classes IX to XII, who are actively and continuously working with them. "We have already begun the conversation about how we can go about this. We don't want Art Room to exceed the boundaries it currently has. Vipin and his team have done an amazing job at starting something very special here. We know that we can't change the face of art education for the whole country; we just want to keep it going in the simple and effective way that it is now," says Gautam.

This year, the art exhibition will take the next step towards including children by introducing a children's pavilion, which is expected to feature art that is designed for children and is easier for them to understand. The team behind it also hopes to use the space as the venue for all on-site workshops in the future. In addition to this, they plan to set up summer camps for children who live in and around the Fort Kochi-Mattancherry area. 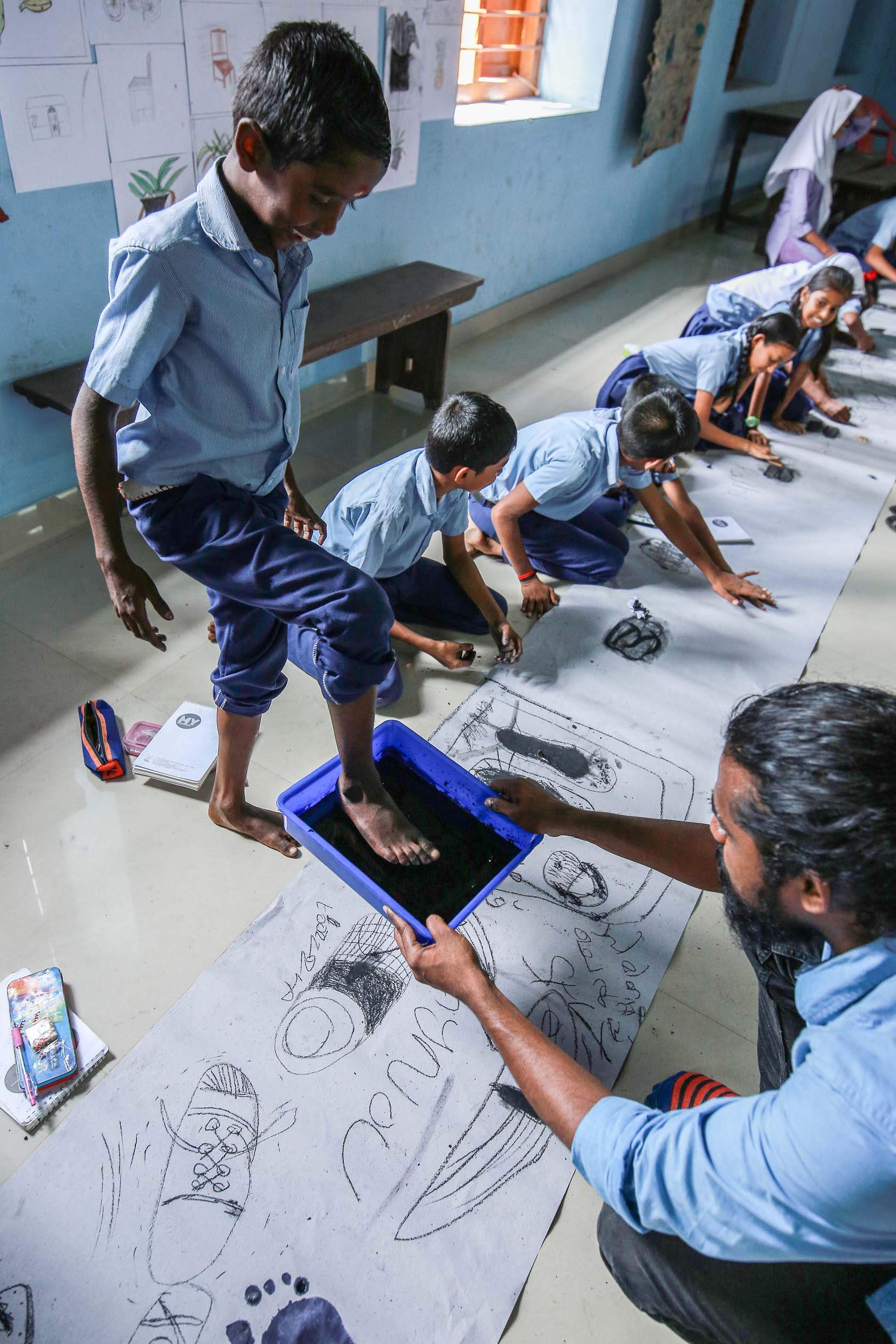 Step up: The programme has been introduced to help students express creativity

Gautam and the team are also working towards introducing an educator's programme to alter the very curriculum used in Art schools. They have tabled more than five programmes in the hope to introduce an intervention to the very structure of Art education. "We have hosted a number of conferences to begin talking about the importance of changing the way in which we teach art. But we are yet to see any action taking root," explains Gautam, adding, "What we need is a model based on action, for us and for the students. Because of this inaction, we have learnt that this is a model that we'll have to create ourselves. If we prove that it can be done, that's how we can teach our students."

Gautam does not believe that this change in method had to come from approaching art as a separate subject. He illustrates this by saying, "Think about how we send our children outside to play. We know that they need these different aspects in their lives. It is an understanding that is outside of our textbooks; there is something we can do to help children grow. This is what art is. We can start by simply making sure that students make something of their own, with their own hands."

There's no doubt that the students in the little school in Mattancherry have fallen in love with their art room. "For them, it's something outside of their same old routine. It doesn't matter what it is, they just want to express themselves differently for that short period of time," explains their teacher Bindu K. Inside the room, paintings that resemble a mini-exhibition stand waiting for these little hands to prod and perfect them. The Biennale has begun in this small classroom near the sea.