What were the 10 Twitter hashtags that Indians went crazy over in 2018?

Tweets and hashtags connect people across the world during key moments in news, politics, entertainment, music and sport

Beyond entertainment, the return of Chennai Super Kings with #WhistlePodu and the emergence of #MeToo in India added to the top hashtag trends.

Here are the 10 biggest hashtags in India on Twitter in 2018:

Released in 2018, #Sarkar the Tamil film starring Thalapathy Vijay (@actorvijay) has been making massive gains worldwide, winning the appreciation of fans on Twitter. Underlined by a political theme, the buzz around the movie was further amplified with audiences taking to Twitter to express their opinions, and making #Sarkar the top hashtag trend of 2018.

Viswasam, the upcoming 2019 Tamil action film featuring Ajith Kumar in a dual role, has started making waves on Twitter. The unveiling of the first look of the film led to the industry and fans Tweeting their excitement, enabling #Viswasam to emerge as a top hashtag on Twitter in anticipation of its launch.

The Telugu blockbuster Bharat Ane Nenu was released in 2018 and became one of the biggest hits in the lead actor Mahesh Babu's (@urstrulyMahesh) career so far. The film received positive reviews from the audience and critics, with fans taking to Twitter to celebrate its success.

Rangasthalam is a 2018 Telugu-language period action drama film that became the third highest grossing Telugu movie of all time after the Baahubali series. The success of the film was evident from the volume of conversations on Twitter, with the industry and audiences pouring in their praise and applause earning the film one of the top hashtags of the year. 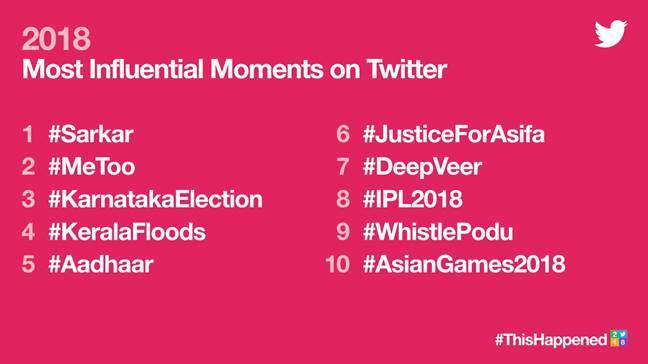 The Tamil-language socio-political drama film starring superstar Rajinikanth, #Kaala, evoked a massive response from fans worldwide. The first-ever Rajinikanth emoji on Twitter further led the movie to be a topic of high interest on Twitter amongst fans, audiences and industry.

Now in its second season, the Telugu edition of the reality TV series Bigg Boss continued to be one of the most talked about shows in the world of television in India and on Twitter.

The #MeToo movement emerged in India this year. As the hashtags #MeToo and #MeTooIndia continued to trend in the country, people started to pay more attention to women’s safety issues across sections of the Indian society, including government, media and the Bollywood film industry.

With 2018 being their comeback year, Chennai Super Kings (@ChennaiIPL) had the crowd chanting #WhistlePodu as they made the dash for the coveted IPL 2018 trophy. Encouraging fans to cheer for the team, @ChennaiIPL made a special video for #WhistlePodu, the colloquial expression in Tamil which means ‘to whistle’, and drove the fans into a Tweeting frenzy with their performance.

India’s biggest cricket extravaganza #IPL2018 continued to be a major topic of conversation on Twitter even in its 11th edition. Special Twitter emojis for all the eight franchises this year added to fans’ enthusiasm on Twitter in support of their favourite teams and amplified the cricket excitement on the platform.