How Muneer Alam has educated over 25,000 students in Kashmir through a pandemic, riots and civil unrest

Muneer Alam has dedicated 20 years of his life to braving political turmoil, nature's ire and now a pandemic to teach his students. We follow the teacher's journey of 20 years

Born in Shahr-e-Khas, the heart of Srinagar, Muneer Alam has been a teacher for most of his life. After graduating as a Civil Engineer from NIT Srinagar in the late nineties, he decided to dedicate his life to sharing the wisdom he had earned. Now, at the age of 40, he has taught almost 25,000 students, some of whom occupy the highest offices in the bureaucratic, medical, legal and political corners of the valley.

“I was an Engineering student during the Kargil War when NIT wascwas the Regional Engineering College,” recalls Muneer. “During those days, we missed out on an entire semester and our curriculum suffered because the institution was located on a highway leading to Ladakh. There was a huge ammunition transfer in the area which created a political disturbance. The impact of this disturbance motivated me to do something for my people in the future.”

Although he started teaching at the age of 15 for his own schoolmates, he officially donned the title of teacher in 2000 when he set up the Institute of Pure and Applied Mathematics. He teaches students of class 11, 12 and offers coaching for JEE, IIT and NIT aspirants. In 2017, a number of other institutions joined his and they decided to offer a number of subjects under one roof. And they decided to name it Gaash, meaning light in Kashmiri. EARLY RISERS: Muneer teaching a class at 5 AM

And true to the name, Muneer’s classes were soaked in light and resilience. “I was bubbling with youthful energy when I started teaching in 2000. Since then, I lived through many great turmoils. During the local uprising of 2010, I managed to speak to the administration and parents to arrange student passes and keep the institution running with 1000 students. I have always been determined not to disturb the education of my students who were entitled to their education.”

In 2019, following the abrogation of Article 370, Muneer was faced with one of the biggest challenges of his career without the ability to communicate with his students. He recollects, “We were not able to reach one another. I spent 15 days completely frustrated.” In the last week of August, he managed to collect the details of his students. And a month later, he walked 30 km at a time when vehicles were not allowed and an eerie silence enveloped the streets to visit the homes of his students.

He resumed his classes on Teachers’ Day 2019. Out of 300, 50 students managed to make their way to his institute at the crack of dawn to avoid the curfew. A few days later, he discovered a threatening letter in his office: “It was from a number of thugs who I will not name. They were questioning the fact that I had opened the institute while they were protesting the abrogation. When I ignored it, I got another letter a week later threatening to shoot me.” 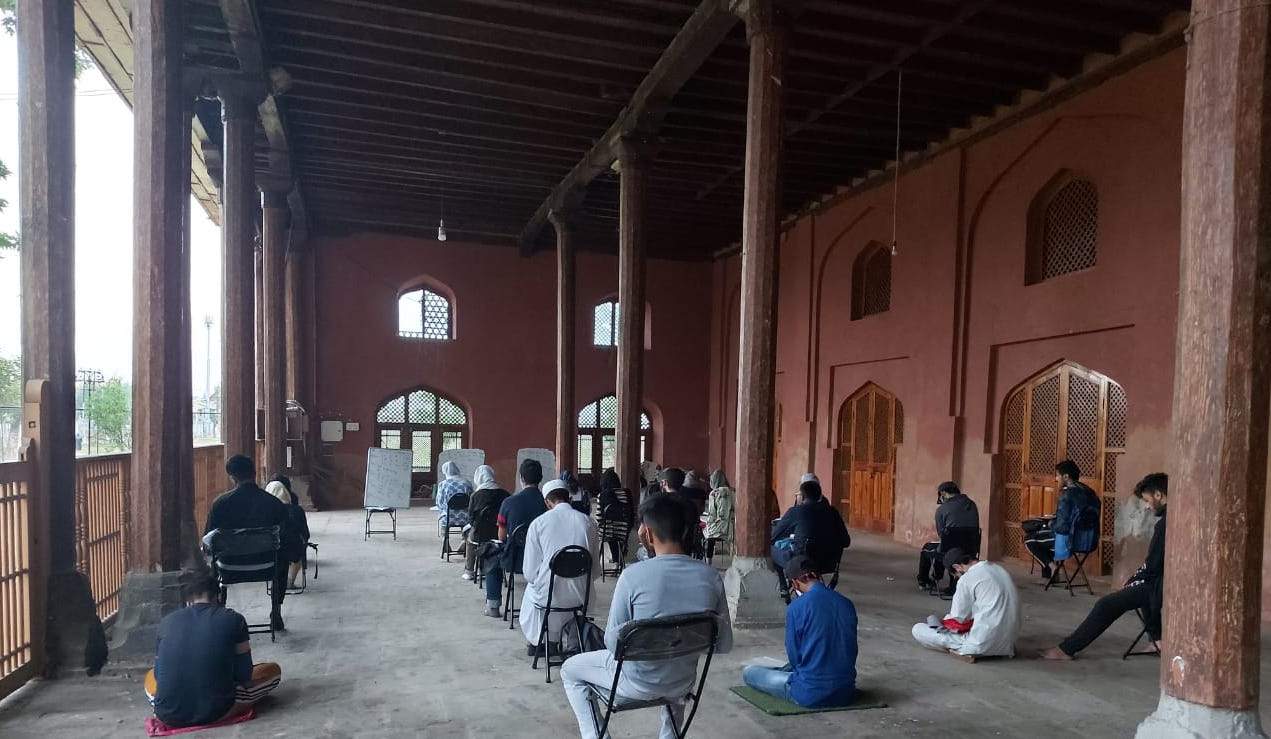 CLASS FIRST: Classes being held in a mosque porch during rains

He continues, “I did not utter a word about the letter to my family or my students. I kept my fingers crossed and kept my courage alive and continued to teach. No one came for me, not a single strand of hair on my head was harmed. This gave me courage. I am of the opinion that education is apolitical. I condemn both wings. When the left for calling strikes and protests, education suffers. On the other side, when the right dictates curfews and build barbed wires, education suffers. I am not on either side, I walk on the path of education, knowledge and light.”

Having literally risked his life for students, the Coronavirus became a larger blow for Muneer. While the rest of the nation was hit by the pandemic in March, Kashmir had its first cases in December 2019. For three months, tuition classes continued as normal although many schools closed. However, March brought with it the news that everything would have to come to a standstill. “For the first time in my life, I was idle,” says Muneer, “In May and April I experienced a pain I had never felt in the 20 years of my career, it stopped me from teaching when the local uprisings, the abrogation and even floods could not!” His students began calling him earnestly for online classes But the recently restored internet was 0G. At a speed of 60 kbps, an instruction video featuring an equation that it took 40 minutes to solve would need a whole day to be uploaded and another day for students to download it. It would take 2 days for a 30 minute lecture to reach a student.

In his search to fight the odds again, he asked a few students if they could gather at his home. In the days that followed, his lawn which could accommodate around 300-400 students was visited by batches of 10 students who sat 3 metres away from each other. However, the numbers began to swell and they needed to find a safer venue.

Eidgah Srinagar is a ground on which more than 3 lakh people come together to offer prayers, and to Muneer’s eyes, it looked like the Pacific Ocean. Since June, groups of students began to gather early in the mornings. And they have not missed a single class since. And when they were greeted by August showers, Muneer and his students found shade in the porch of a nearby mosque. Thanks to a man who has dedicated his life to wisdom, students in the centre have completed 90 per cent of their syllabus. Born in the heart of Srinagar, he has blanketed the valley with light.

Teachers Who Inspire is our little tribute to some great teachers out there who are bringing hope to entire generations and reaffirm our faith that no other profession comes even close. Happy Teachers' Day to every teacher out there. You know you're awesome and so do we!