This Kolkata School just got their students to run a Food ATM to feed hungry kids!

The students from each class section are tasked with filling up a fridge with food and after school, underprivileged children aged 5-15 come and take food packets and enjoy the experience

You've heard of frigde full of food at schools, but have you heard of one that's stocked just for the underprivileged? A 32-litre refrigerator laden with fresh food items throughout the day is ensuring that the poor and needy children in Kolkata do not go hungry, thanks to an initiative taken by this school — supposedly a first for the country. Mahadevi Birla World Academy, situated in Park Circus in Kolkata officially inaugurated an 'All-Time Food' machine last week that offered almost 350 needy children food last Friday alone.

Students stock up food that they bring from home or can buy packets and put it in the fridge. The refrigerator is filled with all kinds of healthy food items including packets of rice, dal, millets, biscuits and noodles among other things. The authorities have come up with an efficient roster which allows the entire school to contribute. Food is served after 3 pm as school ends at 2.30 pm and it is convenient for the authorities to control the crowd after that. Some students stay back and staff help out. 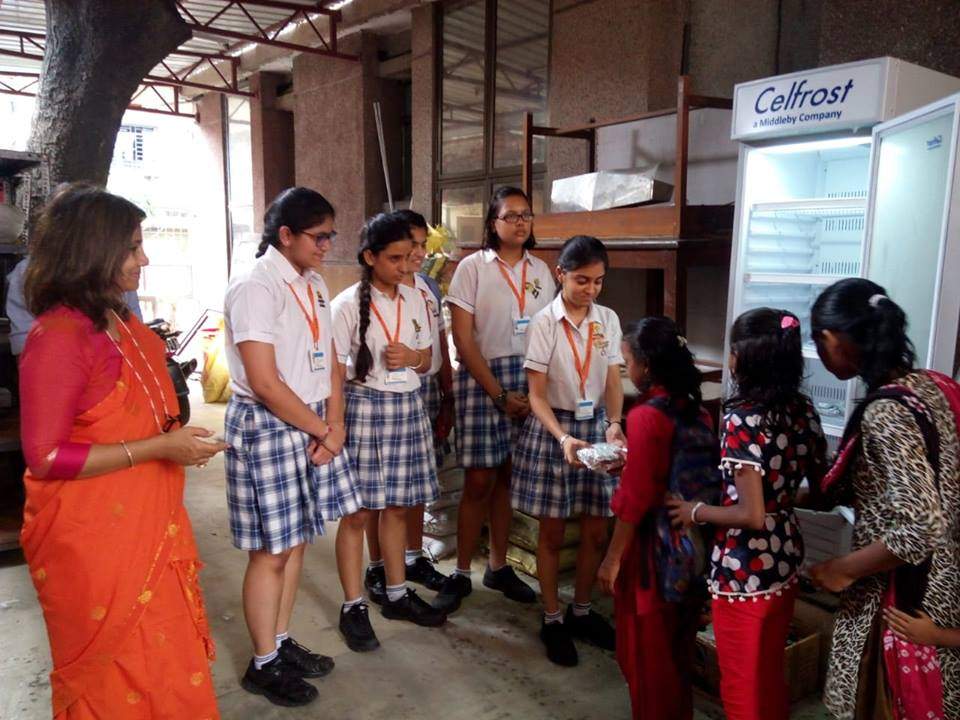 Helping the needy: children within the age group of 5 to 15 years are given free and healthy food

The roster is on a monthly basis where each month one of the sections take up the responsibility. Like when its the Junior section's turn, they divide the number of classes (A, B, C, D, etc) into weeks - for instance, in a week, students from 3A stock up the fridge and then it follows according to the roster. If they are too many absentees, other classes, teachers. staff make up for the rest of it. Needy children within the age of five to 15 years are given food.

The brainchild of the school's principal, Anjana Saha, this initiative has been immensely successful for the last two months when it was on a trial run. Debanjana Roy, who is one of the senior teachers at the institution and is also in charge of the social services wing of the school, oversees the entire procedure. "Initially the plan was different. We wanted to contribute to other food ATMs installed by a restaurant chain in the city. However, Anjana ma'am said why not start one in our own school? I think it was a great idea to take this forward. Now we have been successful in serving over 500 children in just two months," says Debanjana. Providing food to the hungry: Principal Anjana Saha serves food to a child

Asif Ahmed, the co-owner of the popular Sanjha Chulha restaurant chain in Kolkata, first started the Food ATM concept in the city with the support of three organisations (Rotary, Round Table, JITO) in front of one of his restaurant outlets in Park Circus to help curb food wastage and feed the needy. Another one recently opened in Ladies Park in Park Circus to cater to the slum children nearby.

While the plans were still in their initial stages, the school authorities were worried about their students' safety, as it is primarily a girls' school - only the junior section is co-ed. "Later we decided to go forward with it, the school staff has been really helpful in controlling the children and spreading the news across in the nearby areas or slums," adds Debanjana.

"An average of 80 to 90 kids has been given food per day till now. The highest was last Friday when we served almost 350 kids in a day," says

Pragati Madhogarhia, one of the students. "We feel so refreshed even when we are tried after school most of us stay back to serve food. Really young children also come, once there was this little girl approximately 3-4 years of age, she stared at me after I gave her the food and very ecstatically said 'Thank you didi!' that was one of the best feelings I have experienced till date," she adds.