Meet Karthiyani Amma from Kerala who will be 100 when she clears Class X!

Karthiyani Amma, the oldest student of the state speaks about reentering the classroom with a bang through the Aksharalaksham programme

The roads of Muttom, Haripad still remember the weight of Karthiyani Amma's feet as they zipped past on early mornings to reach the local temple where she would scrub the floors and clean the hallways. Even past the age of 90, she would burst in through the temple gates, her back bent with the weight of her years, armed with her trademark toothless grin to the absolute surprise of the day's first temple-goers. Although she is unable to make the journey today, at the age of 96, Amma has managed to sprint on in life, always managing to turn a few heads and change a few hearts.

Karthiyani Amma is enrolled in the Kerala State Literacy Mission Authority's (KSLMA) Aksharalaksham programme, making her the oldest student in the state. After a 2011 KSLMA survey that proved that the state's illiteracy rate had increased to 3 per cent, the programme was introduced to identify and provide education to those who had fallen behind in the first round. The survey identified 47,241 illiterate individuals across 2,086 local wards. This Republic Day, 46,349 of them were given a chance to reenter classrooms and reclaim their right to education.

On my visit to her home, Amma was already seated on her favourite chair clutching a state-sponsored Aksharalaksham textbook in her palms. Ruffling through carefully marked pages, she read out the Malayalam alphabet in her shaking, honey-soaked voice in sync with the rhythm of the rain battering the windows. She is currently enrolled in a 4th standard class that teaches Malayalam and Mathematics. How did she find herself in this living room-turned-occasional classroom? She shrugs nonchalantly, saying, "They came here asking us if we wanted to study and I felt a desire to learn, so I did it. I just felt it in my heart, that's all it was." Her great-granddaughter Rejitha, a teacher herself, chimes in, "She takes it very seriously! A few days ago on a rainy day like this, all the children of the house left their textbooks inside to play in the rain. When my mother peeked into the house, she found Amma studying in a corner with a sliver of light that was coming in through the window. What she is doing is such an inspiration to the children and all of us. We see the importance of something that we all take for granted every day."

The identified students have been assigned trainers who teach them. In Karthiyani Amma's locality, there are 2 trainers for a total of 15 people who have been identified. A prerak looks over the whole process in addition to distributing resources like books, organises the exams, collects the papers and file them.  After being identified by the literacy programme, it was class coordinator and prerak, Sathi K's special interest in Amma that helped her benefit fully from it. Under Sathi and her assigned trainer's watchful eyes, Amma has learnt to read all the Malayalam alphabets.

Karthiyani Amma will work if the opportunity presents itself. Age does not seem to be a limit for her. She's more committed than any of the young people in the area and is more articulate about what she wants

"She wants to study. Her dream is to pass 10th standard," says Sathi. "By the time she does that, she will be 100 years old and she seems completely ready for it by the looks of it. She is ready to hit a century!" she chuckles. The trainer teaches Amma according to her convenience. Because of the varying occupations of the students, they are required by the law to visit each individual student. Sathi watches Amma trace her fingers along the letters on the page, before adding, "Everyone expects a lot of her, she has brought a lot of hope to this area." On July 22, Amma will write her first exam along with a number of other students, the result of which will pronounce them officially literate.

Tell them what your dreams are, Sathi prods Amma. She looks intently at me and says, "I have no big dream or anything. Have you got a job ready for me?" Hearing this, the whole room erupts with laughter. There is a lot of joy surrounding the house and Sathi admits that she draws a lot of positivity from stories like these. She says, "There are others of varying ages, many people past the age of 70 but there is something special about Amma's relentless spirit. It is a big deal for education in India. In this ward alone, there are about 60 people who will write the exam. I hope and expect that Amma will secure a 100 marks." Mission possible: Chief Minister Pinarayi Vijayan presents an award to a student on the inauguration of Total Literacy Day

KSLMA has more than 4000 preraks across Kerala, out of which 151 of them work in Alappuzha district alone in one panchayat across 3 centers. Currently, registrations are being held for the 10th standard batch of students. Other grades include 4, 7 and a higher secondary programme for those who pass out from the 10th standard. The preraks and trainers visit different wards and identifies anyone who needs to be a part of the programme. Sathi explains, "It is an unofficial type of education, it does not follow a school system. You have to be over the age of 17 to enrol in a literacy programme. But with Aksharalakshsam, you just have to be over 15. It is a second chance for those who are identified and it's an opportunity unlike any other."

"There are some people who do not wish to study. They think say that they have too many commitments and a family to look after, but we bring them to the light," says Sathi. "What I always tell them is, even if you want a license today, you need to have passed at least 8th standard. So it's a basic necessity. The effects of the programme speaks for itself. Numerous people have received jobs as as a result of going back to study. We are saving lives here. They think they've lost everything but they get it back." 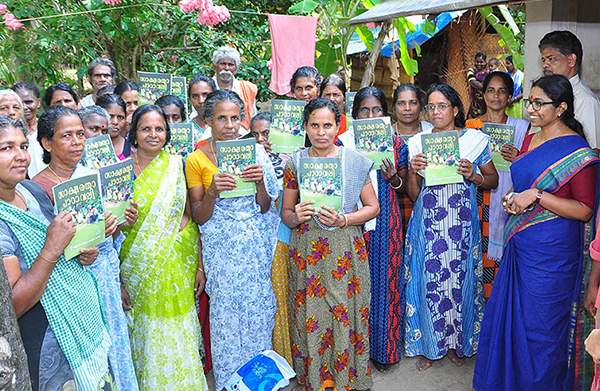 The good fight: The KSLMA has introduced a number of programmes to combat illiteracy

The Kerala government started the Saksharatha or Literacy Mission with the aim to end all illiteracy in the state. In 1990, Kerala was declared the first fully literate state in the country. The Aksharalaksham programme worked towards finding those who had slipped through the cracks with the help of a survey that was taken across all wards in the state. Sathi says, "To ensure that we actually have universal literacy, this was sort of a final survey that we conducted to ensure that we actually reach that space. There is no age limit to this programme. After this last stage of identification and ensuring that these people are able to access education, Kerala will not remember what illiteracy is. Our plan was to announce universal literacy on April 18 but we were unable to because of elections and a few other distractions."

Something about grabbing opportunities and second chances brought our attention back to Amma. I ask her why she wasn't sent to school as a little girl. Her eyes travel back in time before she says, "I always wanted to. No one would teach girls in those days. But what is the point of dreaming? They would never have sent a girl to school." She turns a page in her book. Sathi points at a lesson and says to me, "It's like this song is about her!" And they recite it together: 'We've not lost any time. Fly with me, let's sign our names, read it out loud and gather all the knowledge in the world.' Amma's eyes carefully follow the words on the page bringing them to life through sheer, unabated determination.