Inspired by a TV serial, this 13-year old Mysuru girl spent Diwali trekking to the Everest Base Camp with her dad

Riya Solanki, a student of class VIII whose dream to scale the mountains was born after watching a tv serial scaled the Mount Everest base camp, located at a height of 17,500 feet in Nepal, with her father and a team from Karnataka becoming one of the youngest trekkers from Mysuru to do so.

Thirteen-year-old Riya Solanki, a student at the Manasarowar Pushkarini Vidyashrama, had always dreamt to summit the Khumbu glacier located on the way to the Everest summit and the Everest Base Camp. 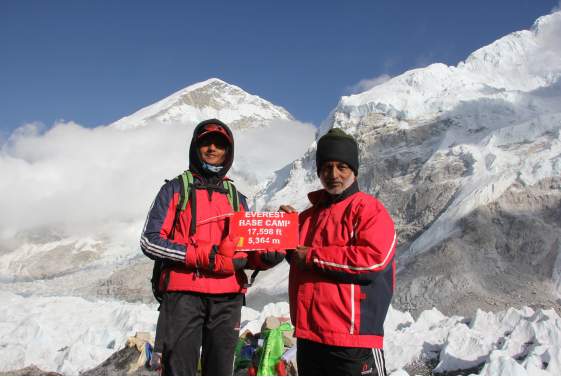 Little champ: Riya Solanki with her father completed the 60 km trek to base camp in nine days

At the age of eight, she first climbed Mt Surya in 2013 and since has climbed Mt Saurkundi Pass in 2014, Mt Rumtu top in 2015, Mt Kedarkantha 2016 and Mt Tunda Bhuja in 2017. Despite all these achievements, Riya says that climbing the Everest Base Camp was by far her the best experience.

“I was following a serial called 'Everest' on a private channel. Since then the thought of climbing the summit was in my mind for over two years. Now after reaching the base camp, a part of my dream has come true. I was really excited and elated when I stood at the base camp. Completing this part of the climb with my father is clearly the most memorable event in my life,” says Riya.

Riya Solanki is an athlete and a basketball player. Talking about her preparation before the climb, she says she did a lot of jogging, skipping and went cycling for 45 days straight. After trekking for more than 60 km on mountains, ridges, boulders, hanging bridges, they finally came to the Khumbu Glacier and reached the Everest Base Camp.

"By this time we reached, we could see tears of joy rolling down the eyes of a few trekkers who were with us. They shared sweets and celebrated. An Indian-American from Gujarat turned emotional and immersed his mother's ashes in the snow at the base camp. It was an emotional scene," says Riya.

Riya was part of a team of trekkers that consisted of about nine people from Karnataka, Kerala and Telangana who left for Kathmandu on October 14 and were later joined by 17 others from Maharashtra and Delhi

Her father DSD Solanki says. "Its a privilege and a very memorable chapter in my life to trek with my daughter. This is a destination that we had wanted to go our entire lives. We completed the 60 km trek to base camp in nine days. All the way we were consuming lots of liquid during the trek to help avoid high altitude sickness."

“Though October was a time for festivities, we thought there was no better way to celebrate the season than doing this climb. In Nepal, the Diwali festival is called as called 'Tihar'," says Riya. They celebrated Diwali at Namache Bazaar with actor and model, Milind Soman and crew. There were also a lot of people and merrymaking, says DSD Solanki.

“Expedition is an expensive affair and one has to spend a lot of money for accommodation, mobile charging, hot water, mineral water. One, therefore, needs to be very cautious about money,” says one of the trekkers in the team. The group returned to their respective homes on October 28.