For you, dear brother: How the loss of her little brother turned Raashi Thakran into a mental health advocate

Based out of Bengaluru, Raashi Thakran lost her 18-year-old brother last year to suicide. Today, she has channelled all her grief and regret into becoming a mental health advocate. This is her story

It was all going well for Raashi Thakran. She was in her final-year at Dr DY Patil Institute of Technology, Pune and had already been placed in a good job. She was all set to jet off to Ahmedabad for her new job and was looking forward to living life independently. But her world came crashing down when her younger brother, Raghav, took to suicide on January 6, 2019. Grief, guilt, anger and trauma threatened to swallow her. She threw herself into her final-year exams and focused on being strong for her parents. After all, that's what people told her to do. 'Be their son!' they implored. But once the exams were over and there was no college to go to, there was no escape. She was diagnosed with anxiety and PTSD (Post-Traumatic Stress Disorder). "I was his big sister, why did he not talk to me? I still find it difficult to come to terms with this. I suppose it's a lifelong process," confesses the 22-year-old.

With the help of therapy, medication and the support of her parents, Raashi managed to get out of the abyss of grief, but a new question began to play on her mind, 'What if Raghav had all the help?'. She immediately called 15 suicide helpline numbers, out of which, only three responded. "Can you imagine what can happen if a person who is on the edge calls a helpline and they don't respond? They can see it as a bad sign, for all we know," says the youngster, sounding almost angry. But she channelled all her rage and grief into something more productive. With the help of change.org as she was a part of their She Creates Change Fellowship, Raashi started a petition addressed to the Ministry of Health and Family Welfare in July 2019. She was campaigning for a national helpline number for suicide prevention. "I made the most of social media, posted on multiple platforms and within the first couple of months, we crossed two lakh signatures," informs Raashi who is now based out of Bengaluru. One of her posts | Courtesy: Raashi Thakran

"I was just happy that a positive conversation was starting around suicide prevention," shares Raashi. But as her social media game got stronger, more and more big names started backing her claim, including actor Adil Hussain, author Malini Agarwal and many others. "The good folks at change.org even held a meeting with NITI Aayog regarding it," shares the Delhi-born. Soon, her petition crossed 3,97,080 signatures and with the wave that was already engulfing the nation following the suicide of actor Sushant Singh Rajput, the 24x7 suicide helpline Kiran (1800-599-0019) was launched by the Ministry of Social Justice and Empowerment. There is no denying the fact that Raashi and her campaign played a key role in making this happen. They declared victory on August 28, 2020.

But this is not the end of Raashi's crusades, she continues to use the power of social media, particularly her Instagram page, to sensitise people about mental health. Her posts like 'Affirmations to overcome limiting beliefs' and 'Consequences of sexual trauma' really help with taking the discourse about mental health and suicide prevention forward. "I am not a mental health professional, I have just been through a whole lot. So I try not to give gyaan, I just share what worked out for me," she states and adds, "I am very vulnerable with my content, that's why I think it resonates with people." Even professionally, she works for YourDost, an online counselling and emotional wellness platform. 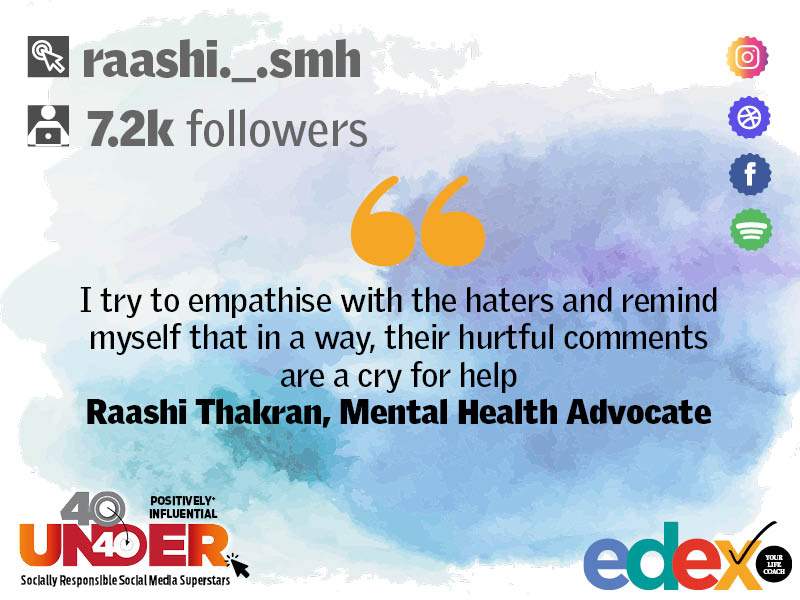 For now, Raashi's goal is to keep a check on the helpline number and ensure that it is in working condition. For those who DM her for help, she has collated a list of ten counsellors, some of them who offer their services for free or for a nominal fee. "I continue to derive my strength from Raghav, he is the reason I am going on. I want to continue honouring his memory because I know he is watching over me. More importantly, I want to continue being an advocate for mental health because I guess somewhere, helping others heals me," she says and signs off.